A mother of seven has been charged with being at the centre of a web of scammers who made $800,000 from fake welfare claims and took money meant for people living with disabilities. 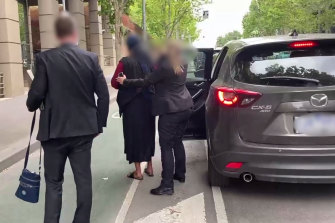 Arrests made as part of Operation Persei.Credit:AFP

Ms Hassan, who herself has a child with a disability on a NDIS plan, is accused of spending some of the NDIS funds meant for her child on herself while coaching others to defraud taxpayer-funded programs.

She also allegedly set up an NDIS provider business to commit her fraud, and, with another NDIS provider – 52-year-old Melton woman Ana Boal – used their businesses to exploit people with a disability for profit, according to the AFP.

Investigators said as a result, six people living with disabilities did not receive the full level of care they were entitled to.

In total, the five stand accused of defrauding the National Disability Insurance Scheme and the Child Care Subsidy of a combined $800,000, with Ms Hassan accused of splashing some of the cash on house cleaning, nannies and buying a home in Melbourne's north.

"Stealing from Australians is a crime but defrauding funds from those who rely on additional support is abhorrent,” she said.

"This joint agency investigation has not only led to the arrest of alleged offenders but also prevented the syndicate from further defrauding of the NDIS, with three providers de-registered and another’s registration being rejected.

"It will also mean NDIS recipients targeted by the accused will now receive the resources they are entitled to."

Federal police launched Operation Persei in August 2018 in an attempt to infiltrate the illegal operation after receiving intelligence about the suspected activity.

Investigators said as they dug deeper they discovered the Whittlesea mother was allegedly also fraudulently obtaining government benefits for her "romantic, live-in partner" Mr Ibrahim, who she said she was employing to care for her kids.

Police allege though that Mr Ibrahim instead worked at his own hair salon with his childcare subsidy rebate used to employ nannies for their home.

Caroline Semisi, 32, from Meadow Heights and Asha Mohamed, 31, from Coburg also allegedly claimed benefits to care for the Whittlesea mother’s children as family daycare educators, despite never doing so. 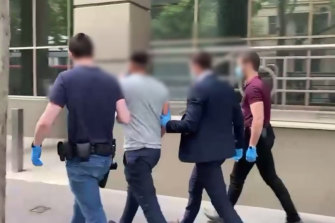 Arrests made as part of Operation Persei.Credit:AFP

On March 27 and 28, federal officers executed 14 search warrants, seizing more than 35,000 pages of documents and 5.3 million electronic files including photos, documents and emails.

Ms Hassan and her four co-accused appeared in Melbourne Magistrates Court on Monday where they had their bail extended to reappear in court on March 2.

A federal police spokeswoman said Ms Hassan has been charged with various offences including conspiracy to defraud, dishonestly causing loss to another person and obtaining financial advantages through deception.

Mr Ibrahim has been charged with conspiracy to defraud and obtaining financial advantages through deception.

Ms Boal is also facing conspiracy to defraud charges while Ms Semisi and Ms Mohamed have been charged with submitting false claims.

The matters are yet to be proven.

"My message to anyone thinking of trying to rip off the Australian taxpayer through the childcare system is – don’t, because we will come after you," Mr Tehan said.

Our Morning Edition newsletter is a curated guide to the most important and interesting stories, analysis and insights. Sign up to The Sydney Morning Herald’s newsletter here, The Age’s here, Brisbane Times’ here, and WAtoday’s here.