‘I told her how much she was loved and then I let her go’: Tory MP Cherilyn Mackrory weeps as she tells baby loss debate she ‘kissed her daughter goodbye’ after agonising abortion decision at 20 weeks when she discovering baby was severely disabled

A Tory MP broke down in tears to day as she told MPs about the agonising decision she took to have an abortion.

Cherilyn Mackrory, 44, wept during a parliamentary debate on baby loss as she recounted her traumatic experience while pregnant with her second child, a girl.

The Falmouth and Truro MP was given the ‘terrible news’ in January last year at the 20-week scan that the baby had an  ‘extremely severe form’ of spina bifida.

She and husband Nick later made the heart-wrenching decision to have a termination, and named the girl Lily.

Mrs Mackrory told the Westminster Hall debate: ‘I lay on the couch and I grabbed my husband’s hand tightly and tears stung my eyes – not unlike now.

‘When I glanced at him, his eyes were watering too. We didn’t dare believe what had just happened. 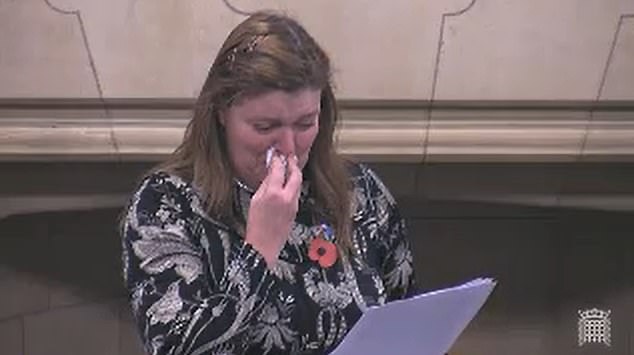 Cherilyn Mackrory, 44, wept during a parliamentary debate on baby loss as she recounted her experience.

Mum-of-one Cherilyn Mackrory, 44, was first elected as MP for Falmouth and Truro in western Cornwall in December’s general election. 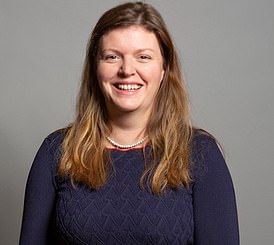 The Scarborough-born politician won the seat with a majority of more than 4,500 after the previous MP, Tory Sarah Newton, stood down after disagreeing with Boris Johnson over Brexit.

She previously had a career in IT and moved to Falmouth in 2011.

Her husband Nick is Cornish and they have a daughter together.

A Brexiteer, she ran for the seat saying she wanted to ‘help unblock the Brexit situation so we can then move on to the other important domestic and international issues that we face’.

Last month she was subjected to a protest at her Truro office after voting against free school meals for the poorest children during school holidays. End to Child Poverty saw plates left around the building in the Cornish capital.

‘Just over an hour later we were sitting in the office at our main hospital, the Royal Cornwall Hospital in Truro, with a wonderful consultant and an incredibly kind bereavement midwife.’

Ms Mackrory said she was checked again, adding: ‘But any hope we had was extinguished by a slow and silent shake of the head.

‘But my baby was still kicking. And so started the most traumatic weekend of my life to date. We had no idea what would happen next.

‘Our world had started to swim and spiral away, and neither of us knew what questions we should ask.’

DUP MP Jim Shannon (Strangford) intervened to give Ms Mackrory time to compose herself but he too fought back tears, telling her: ‘I understand her grief, we all do.’

Ms Mackrory praised the ‘extreme kindness’ of staff at the hospital, before describing the termination of her ‘much-wanted’ baby’s life.

She said she ‘endured’ the procedure and has ‘never felt so helpless’, explaining: ‘I was voluntarily allowing somebody to interject a long needle through my skin, into my womb and into my baby’s heart so they could inject some potassium to end this little life.

‘Our baby was very strong and it took longer than it usually does.

‘I just hung on to my husband and I let him be strong for me, not that he felt that he was.

‘I felt my baby kicking until the very end.’

Ms Mackrory said they returned to the hospital two days later, and was ‘induced and endured an eight and a half hour labour’.

She said: ‘Finally I delivered.

‘I hadn’t planned to look at my baby. To be honest, I was scared of what I might see.

‘The midwife said to me: ”You have the most beautiful baby girl.”

‘And there she was. A perfect, beautiful sleeping girl. She was tiny.

‘I held her, I kissed her, I told her how much she was loved and then I let her go.’

WHAT IS SPINA BIFIDA?

Spina bifida is a fault in the development of the spine and spinal cord that leaves a gap in the spine.

Most cases are detected before birth, at the 20-week scan.

The membranes and spinal cord push out to create a sac in the baby’s back.

This sometimes leaves the nervous system vulnerable to infections that may be fatal.

In most cases surgery is carried out to close the gap in the spine after birth.

But damage to the nervous system will usually already have taken place, resulting in:

Most babies with myelomeningocele will also develop hydrocephalus, with excess cerebrospinal fluid (CSF) pooling inside the brain.

This is caused by a malformation at the base of the skull in which the lower parts of the brain are pushed down towards the spinal cord.

Babies with hydrocephalus are fitted with a shunt after birth to divert the fluid from the brain, so reducing the risk of increasing cranial pressure, into the abdominal cavity.