Oh deer! Moment distressed stag is spotted with its antlers caught in a rope swing before RSPCA cut it free

This is the heartbreaking moment a poor stag had to be cut free after getting its antlers caught in a rope swing.

A fisherman spotted the deer in distress in a woodland in Knutsford, Cheshire, and reported it to the RSPCA.

He had run to a rope swing with a piece of wood tied to the bottom that was hanging from a tree and got tangled. 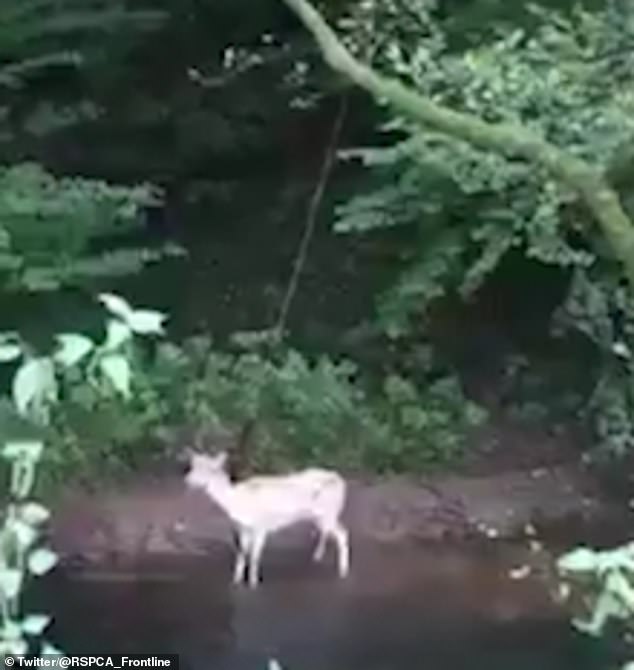 A fisherman spotted the deer in distress in a woodland in Knutsford, Cheshire, after it became tangled in a rope swing hanging from a tree

In the footage, taken on September 28, the distressed animal thrashes about in an attempt to free itself, but is stuck.

It stands on its hind legs to try and untangled itself, but is pulled back by the rope to stand in the water once again.

The movements of the animal cause the branch of the tree to shake but the rope is still stuck and the deer it unable to get loose.

RSPCA Inspector Nadine Pengilly had to hide behind a tree so she didn’t scare the deer then waited for the moment to cut him free.

An RSPCA spokesman said: ‘The poor deer was thrashing around trying to free himself and was becoming agitated when Nadine was near.

‘So the rescue took a lot of time and patience to make sure the deer was calm before approaching.’

Insp Pengilly said: ‘This deer was lucky someone was fishing nearby and spotted him otherwise I think he could have been stuck there for a while. 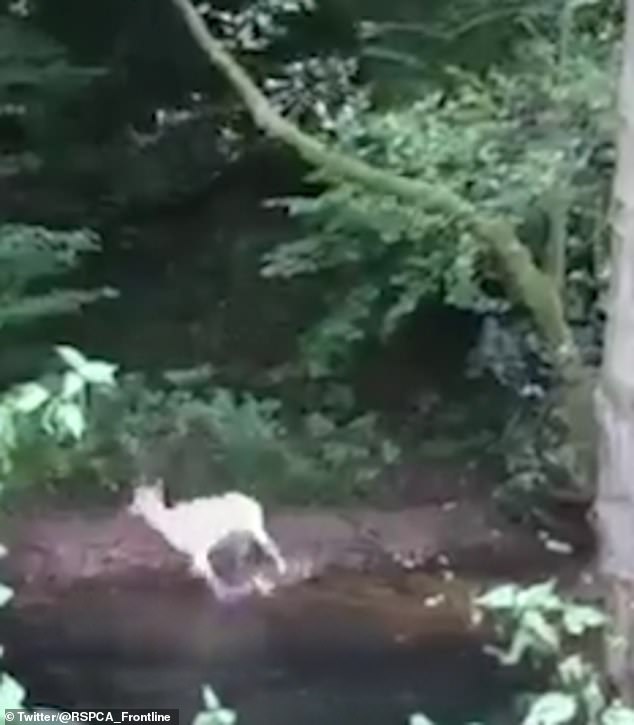 ‘He had run into a tree swing and got his head and antlers entangled in the rope. There was a lot of patience involved in this rescue.

‘After a couple of attempts, I managed to come out from the tree and cut the rope releasing the deer and freeing it from the rope before the deer ran back off into the woods.

‘The deer was in really good condition so thankfully could be released immediately.’