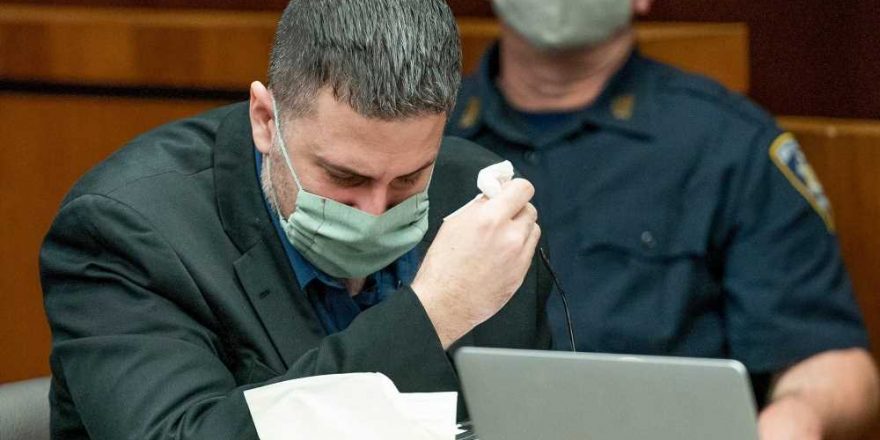 The ex-NYPD cop charged with murdering his autistic 8-year-old son showed no emotion in a Long Island courtroom Wednesday as prosecutors presented photos of his boy’s shirt, socks and soiled pants.

Michael Valva’s stoic composure in Suffolk County Supreme court came after he teared up Tuesday when prosecutors played the chilling 911 call he placed the day of little Thomas Valva’s death.

His former fiancee Angela Pollina, who is also charged with second degree murder, appeared to wipe a tear away with a tissue during Wednesday’s pre-trial hearing.

The photos of Thomas’ clothes were flashed across a screen in the courtroom as Suffolk County Det. Michael Ronca was on the stand discussing his investigation into the boy’s January 2020 death.

Ronca testified he was at the Center Moriches home when he learned from another detective that Michael Valva had at some point removed his son’s clothing and left them in a white plastic bag in the home’s backyard patio.

“It was my goal to find that bag,” Ronca said in court.

Ronca found the small bag outside in the yard, among other large black bags.

Michael Valva and Pollina are both accused of killing and abusing Thomas, who authorities said died last year from extreme hypothermia after being locked in the couple’s freezing garage overnight.

Prosecutors claim they left him in an unheated garage while the temperatures outside dipped to 19 degrees.

On Tuesday, Suffolk County Police Sergeant Gregory Turzer testified that Pollina told him Thomas had fallen in the driveway.

Pollina also said that Thomas had defecated and urinated himself. She later told Turzer she allegedly helped Michael Valva bring Thomas to a basement shower “where they can get Thomas cleaned up,” the sergeant testified.

Meanwhile, Michael Valva’s attorney told reporters outside court that the police needed a warrant to search the home.

“The defense is attacking the legality of the search of the residence involved here,” said Valva’s lawyer, Anthony La Pinta.

Pollina’s lawyer, Matt Touhey, agreed and said Pollina is expected to take the stand during pre-trial hearings this week.

“When someone’s innocent, they’re not hiding behind anything and she wants to get up,” Touhey said.

“Angela’s not really there when this tragedy happens,” Touhey earlier explained.

“She’s not in control. Mr Valva was.”