Meteoric rise is talk of the legal fraternity

How's this for a meteoric rise?

Bailin's ascension has been so speedy it's the talk of Melbourne's competitive legal circles. According to the A-G's release, the Monash University graduate was admitted as a lawyer in 2010, and since then he has held positions at the County Court, the Office of Public Prosecutions and Victoria Legal Aid. There, his most recent position has been as acting program manager, indictable crime. 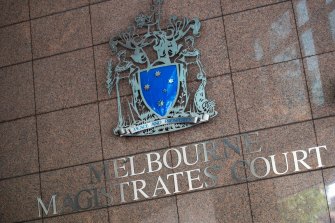 Bailin also founded the Prison Legal Education and Assistance Project and has held leadership positions with the Law Institute of Victoria.

While it is not mentioned in the release, he also spent time as a clerk in the County Court to then chief judge Michael Rozenes and as a senior administrator in the criminal division.

Last year County Court judge Lisa Hannan was appointed Chief Magistrate of the Magistrates Court. So at least Bailin will have some familiar faces to show him the ropes.

RETURN OF THE NATIVE

Ladies and gentlemen, he's back. We refer to Srechko "Stretch" Kontelj, the former mayor and deputy mayor of the Greater Geelong Council who spent 18 years as a councillor before the whole place went belly-up in 2016. That year the state government sacked the entire council, led by former paparazzo Darryn Lyons, after it was described as "dysfunctional".

The previous year, showing impeccable timing, Kontelj and wife Paula had escaped to the Channel Island of Guernsey, where he served as group legal director of the vast Specsavers global empire.

Now back in Geelong thanks to COVID-19, Kontelj is running for a seat in Brownbill ward, on a ticket with younger brother Eddy, who has twice broken the world record for the longest static cycling marathon.

Not everything is going to plan. Three campaign posters have been stolen and four "disgustingly" graffitied. Not to mention the couple posted illegally on government land.

Kontelj, a longstanding member of the Liberal Party, admits to humble ambitions and says Geelong has been a largely united council over the past three years. But also: "People are looking for vision and strong leadership. This council has been very much about sticking to its knitting."

He maintains that an "additional level of leadership" to "survive [the pandemic} and thrive" will be needed. Wherever could Geelong find that?

Local government elections are by postal ballot during lockdown, but Kontelj has been forced to run an extremely remote campaign.

At the moment the 58-year-old is more than 70 kilometres away in Melbourne's Simpson Barracks, on deployment as a reservist squadron leader for the RAAF.

Reading the small print of Nine's annual report, we came across an interesting factoid about Future Women, the executive membership club run by Helen McCabe and Nine, owner of this masthead.

There has been a change in circumstance for the women's leadership and networking group. Nine's accounts show it bought an 80 per cent chunk of the business for $2.5 million in 2018. But this year's annual report shows Nine has sold 30 per cent of the business. And what's this? A line in the report notes Future Women paid Nine $11,000 in a related party fee. No comment from Nine but it seems to be an annual payment by Future Women to the media group for accounting, legal and administrative services.

Nine also wasn't prepared to comment on how much it received for offloading the 30 per cent stake. Nor was McCabe. 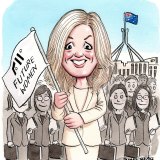 It's worth noting how things have changed. Shortly after buying into the venture in 2018, Nine's accounts noted it was "highly probable" the group would go on to buy a remaining 20 per cent stake in Future Women.

This column previously revealed Future Women's recent success positioning itself as the training provider of choice for women working in the bureaucracy, it having signed on several federal government departments as clients for female-focused training courses, events, and networking opportunities.

By August, government contracts had brought in a tidy $420,000 in 10 months from the Australian Federal Police and a dozen government departments, including Home Affairs, the Attorney-General's Department, Treasury, and the Department of the Prime Minister and Cabinet. Fresh government tender documents reveal Future Women has had more success, adding another $100,000 to the bottom line in the past two months.

In mid-August, it secured a new contract with Home Affairs and another with the Infrastructure Department. In September, it was the Industry Department.

As it turns out, turning female bureaucrats into women of the future is big business.

The tyranny of distance can be costly indeed. Gladys Liu showed that keeping in touch with constituents during a pandemic can be an expensive business. The first-term federal Liberal MP who occupies the ultra-marginal seat of Chisholm spent $17,784 on two virtual town hall events in May. Ouch.

Our weekly newsletter will deliver expert analysis of the race to the White House from our US correspondent Matthew Knott. Sign up for The Sydney Morning Herald‘s newsletter here, The Age‘s here, Brisbane Times‘ here and WAtoday‘s here.