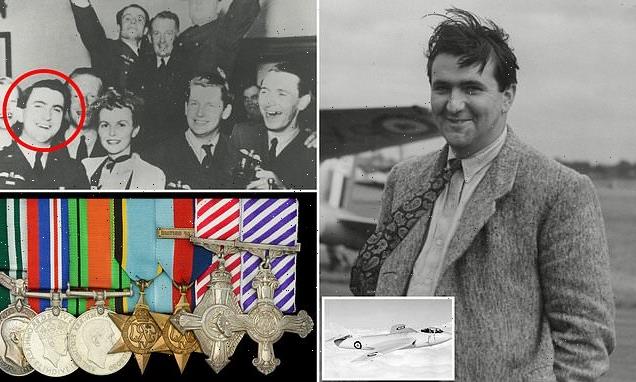 Medals of WWII pilot killed in speed of sound plane to fetch £70,000

Medals of Battle of Britain Spitfire pilot set to fetch £70,000 at auction: Flying ace Trevor ‘Wimpy’ Wade survived being shot down FIVE times during WWII before he died in 1951 test flight in aircraft built to smash sound barrier

The medals of a fearless Battle of Britain ace who survived being shot down five times have emerged for sale for £70,000.

Squadron Leader Trevor ‘Wimpy’ Wade was one of ‘The Few’ who destroyed up to 19 German planes during the Second World War.

During the height of the Battle of Britain in 1940 he shot down three enemy aircraft in a single day.

Such was the Spitfire pilot’s relish for a dogfight he would often close to within 50ft of the enemy to fire a barrage.

His five narrow escapes included the time he crash-landed into a Sussex racecourse after being taken out by a formation of Dornier 17 bombers.

He was trapped upside down in the wreckage of his Spitfire, which luckily did not catch fire.

On another occasion he crawled from the wreck of his aircraft just before it exploded.

Squadron Leader Wade, of 92 Squadron, survived World War Two only to be killed in an accident in 1951 when the experimental aircraft he was flying, which had been built to try to smash the sound barrier, crashed. The medals of fearless Battle of Britain ace Trevor ‘Wimpey’ Wade, who survived being shot down five times, have emerged for sale for £70,000. Above: Wade after the war 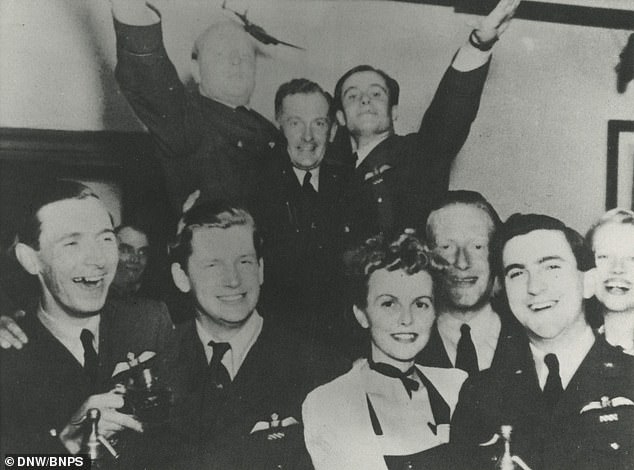 Weeks before his death he had confided in fellow RAF ace and member of ‘The Few’, Flying Officer Tony Bartley, that he had ‘lost his nerve’.

But pride dictated he kept flying, with tragic consequences as his Hawker P.1081 aircraft crashed near Ringmer, East Sussex.

An unpublished letter from Bartley, who became a Hollywood producer after the war, is included in the sale.

In it he wrote: ‘I told him to, for God sakes, quit while he was ahead. But he obviously disregarded my advice.’

Squadron Leader Wade’s medals, including the prestigious Distinguished Flying Cross and the Air Force Cross, are being sold by a private collector with London auctioneers Dix Noonan Webb.

Mark Quayle, a medal specialist at Dix Noonan Webb, said: ‘Wade was a pilot’s pilot, and a member of what is recognised as one of the elite squadrons of the Battle of Britain.

‘A Spitfire “Ace” who survived multiple dices with death during the war, but tragically succumbed to a peace time test flight.’ 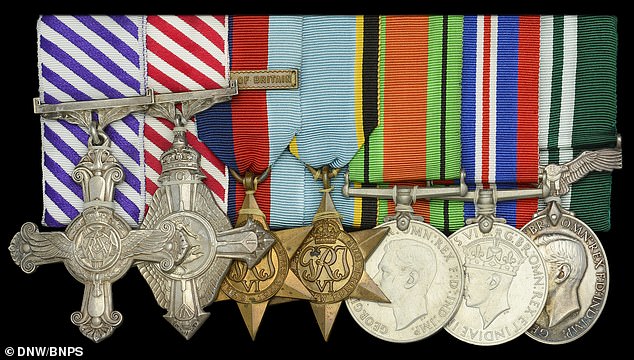 Squadron Leader Wade was born in Tonbridge, Kent, in 1920 and joined the Royal Air Force Volunteer Reserve in 1938.

At the outset of war, he was called to full time service, and he was commissioned into the RAF in April 1940.

He married his sweetheart Josephine Gibbins in August 1940 and weeks later was risking his life daily to fight the Luftwaffe.

His first kill was a ‘shared’ Junkers Ju88 on August 19, but his Spitfire was hit by return fire and he made a forced landing at Norton, Selsey, escaping the wreckage just before it exploded.

His combat report reads: ‘Return fire was observed from coming underneath the enemy aircraft.

‘Some three minutes later smoke came out from both sides of my engine when half a mile south of Selsey Bill.

‘By this time flames were coming from my engine and fumes filled my cockpit.

‘I got out unhurt, and eventually the aircraft blew up.’

Between September 10 and October 29, 1940, he destroyed or damaged 11 more German planes, including three on a single day, October 12.

His patrol combat read: ‘P/O Wade made a number of attacks on an Me.109 which he chased down to 2,000 feet, in the Dover area, and was then smoking enough to be claimed as damaged. 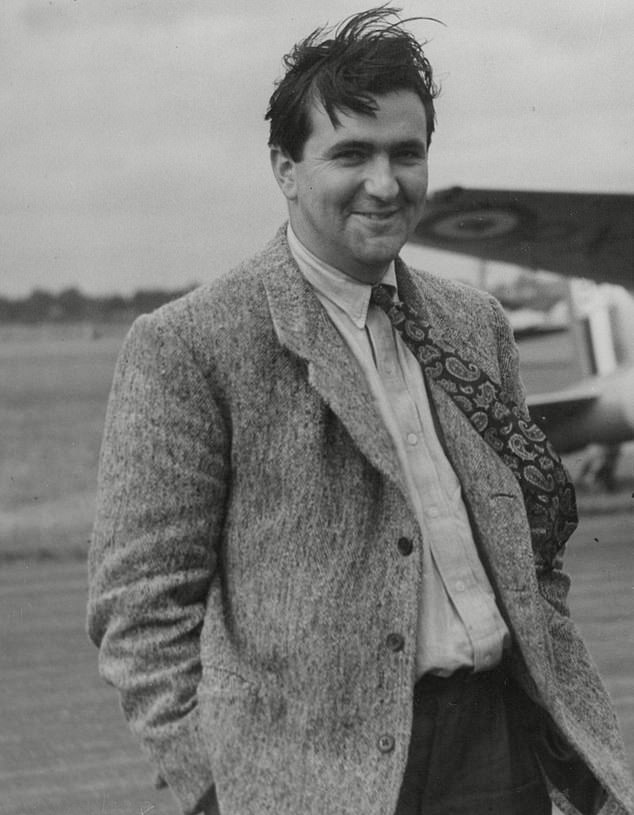 Squadron Leader Wade’s five narrow escapes included the time he crash-landed into a Sussex racecourse after being taken out by a formation of Dornier 17 bombers. Above: The pilot in 1949 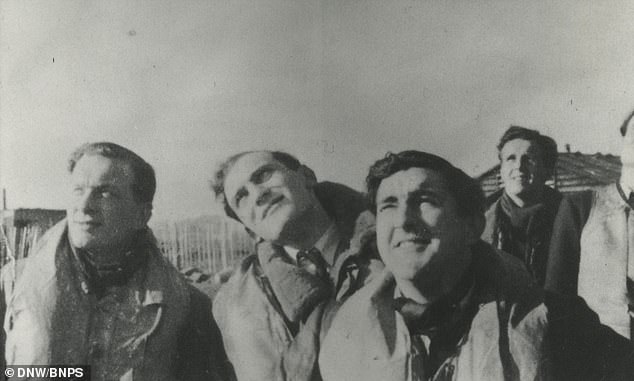 ‘A second e/a was destroyed… by P/O Wade, who made two attacks, the second closing to within 15 yards, resulting in the pilot baling out… P/O Wade then fired from full starboard beam at another Messerchmitt which immediately started pouring glycol, rolled slowly to the right and dived vertically.

‘With his remaining ammunition he engaged a third which dived, smoking, to 4,000 feet approximately, before he lost sight of it…’

Squadron Leader Wade destroyed a Dornier 17 over the Thames Estuary on November 26, 1940, then added a Me Bf 109E over the Channel on December 2.

Five further kills were recorded in May and June 1941, including an Me 109 destroyed after a 90 minute dogfight led by legendary Group Captain Brian Kingcome on June 16. 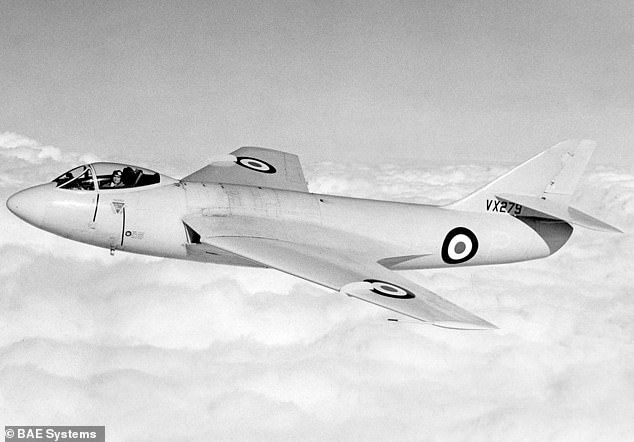 Squadron Leader Wade, of 92 Squadron, survived World War Two only to be killed in an accident in 1951 when the experimental aircraft he was flying, the Hawker Hawker P.1081 (pictured) which had been built to try to smash the sound barrier, crashed

The Daily Reported Squadron Leader Wade’s death in 1951. It described him as a ‘brilliant’ pilot

During the skirmish, he came to Group Capain Kingcome’s aid when he was being attacked and took out the enemy fighter.

A combat report states: ‘P/O Wade, after being attacked himself 2 or 3 times, got in a number of bursts at an e/a which was attacking F/Lt Kingcome, from varying angles and varying ranges from 200 to 50 yards.

‘After his first burst the port side of the e/a’s engine caught fire, it dived steeply and rolling on its back, crashed into the sea.

‘He was then engaged by another, and getting in to a position to fire from above found his ammunition exhausted.’

Squadron Leader Wade was posted for a rest to 123 Squadron for a rest at the end of June 1941, by which time he had earned a Distinguished Flying Cross.

His DFC citation reads: ‘This officer has been engaged continually in operational flying since May 1940, and has proved to be a pilot of skill and determination and has contributed much to the success of his squadron.’

He spent the rest of the war as a test pilot, receiving an Air Force Cross in 1944.

Post-war, he became a journalist with The Aeroplane and tested the first Hawker jet-propelled fighter.

An unpublished letter from Flying Officer Bartley, who became a film executive after the war, is being sold with the lot.

It reveals that Squadron Leader Wade visited him in Hollywood and voiced his flying doubts not long before the fateful flight on April 3, 1951.

He writes: ‘Just before Wimpy was killed he came out to Hollywood where he stayed in my home, and one evening, confessed to me that he had lost his nerve test flying.

‘I told him to, for God sakes, quit while he was ahead. Could happen to any of us, but he obviously disregarded my advice and warning.

‘He was one of the most skilful pilots I knew and flew with.

‘Maybe it was his natural conceit forbade him to do this, but in any event, he was a very nice fellow I was very fond of, and a very sad and unnecessary loss in my book.’

The sale takes place on December 8.