Market jitters as Trump does better than expected in early results

Investors piled into tech stocks, government bonds and the dollar in the early hours of Wednesday morning as hopes for a clear outcome to the presidential election on the night faded.

The market’s futures, which allow investors to bet on the rise and fall of the stock market, rose by as much as 4 per cent late last night, a sharp surge which actually caused trading to be put on hold for two minutes to allow investors to take a pause. 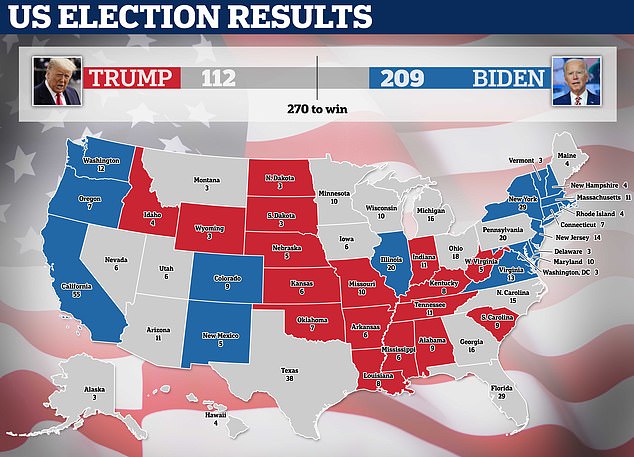 Markets appeared to have begun to price in a Joe Biden win but Donald Trump was doing better-than-expected in early swing states, including taking Florida’s 29 electoral votes

Tech stocks have boomed since the start of the coronavirus pandemic and bets on the Nasdaq outperformed other US stock markets overnight, with futures bets on the Dow Jones Industrial Average of 30 major US companies up 0.4 per cent and those on the S&P 500 up 1.1 per cent.

The overnight predictions suggested investors had gotten jittery over an election tighter than previously expected and looked to stocks less likely to be affected by which party wins the White House.

‘Markets seem to be pricing in better chances for Trump, or at least a smaller chance of a blue wave,’ Stephen Innes, of Axi, said.

Meanwhile returns on 10-year US Treasury bonds fell by the most they had since April last night, as investors flocked to them as a safe haven.

Yields on the Government debt had previously risen to 0.93 per cent as markets forecast a Biden victory, but this fell to 0.83 per cent amid fears a long-awaited economic stimulus package could be delayed by a contested election.

Bond yields fall when their prices rise as there is more demand, while the dollar also rose by 0.7 per cent in another sign investors were looking for a safe port for their funds.

‘Yesterday the market was pricing in this blue wave and we saw rising Treasury yields and a falling dollar, but this morning the market started to price Trump back in, when we saw Nasdaq futures up, yields down and dollar up. 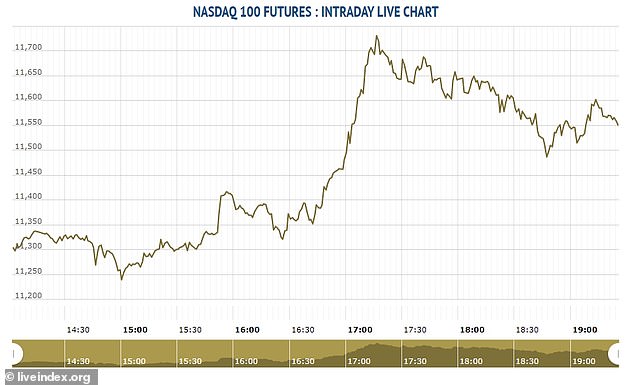 Trading was stopped on Nasdaq futures for 2 minutes after it spiked by close to 4% late last night, as investors piled into the tech-focused index home to the likes of Facebook and Google

‘But now we’re entering a new phase and a delayed, and possibly contested election, is now entering the market’s mind, which would be the worst possible outcome.’

Markets in Asia have continued to rise however, with stock markets in China, Hong Kong, Japan and South Korea all up during the day’s trading.

The nervousness from investors comes as the election looks tighter than they had previously expected, with Donald Trump looking set to win the swing state of Florida and appearing to outperform polls suggesting a more comfortable victory for former vice president Joe Biden.

Stock markets around the world had previously rallied yesterday as investors bet on a clearer victory for the Democrat candidate and the billions of dollars in economic support and spending a united Democrat White House and Senate is expected to usher in. 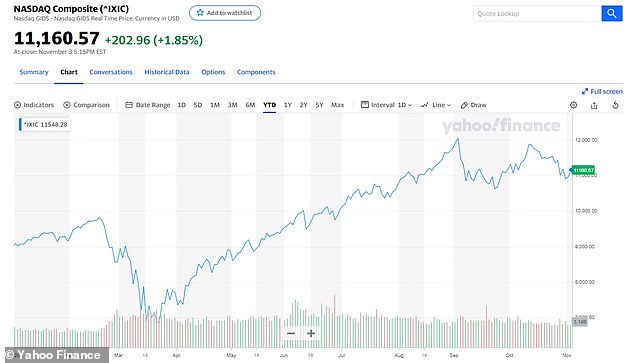 The Nasdaq has surged since a massive fall in global stock markets at the onset of the coronavirus pandemic, driven by the dominance of major US tech giants 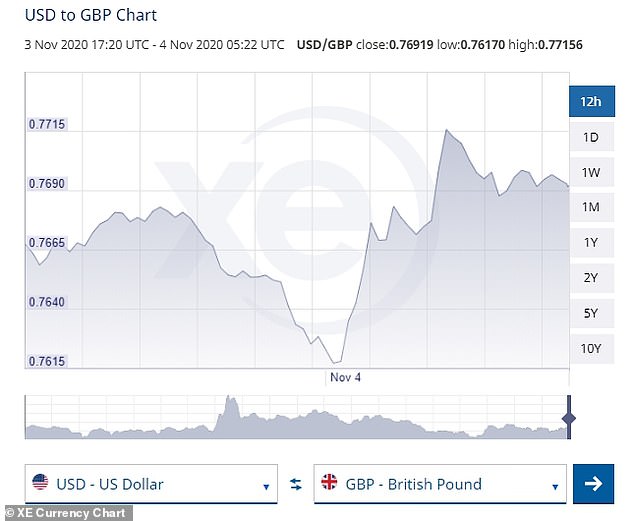 But ‘as the night grinds on Donald Trump appears to have staged a remarkable comeback, as polling across the US suggests he has had a good night’, Chris Beauchamp, chief market analyst at IG, said.

Wall Street expects a sharp drop in stocks if the result of the election is unknown for days, while if the two parties split control of the White House and Senate then there could be less chance of a much-needed economic stimulus.

Investors and economists have been clamoring for a renewal of stimulus since the expiration of the last round of supplemental benefits for laid-off workers and other support approved earlier by Congress.

But investors see cases for optimism in other electoral scenarios, too. If Trump were to win, that would likely mean a continuation of lower tax rates and lighter regulation on businesses, which would prop up the corporate profits that are the lifeblood of the stock market.

Ultimately, many professional investors say which party controls Washington matters much less to the economy and markets than what happens with the pandemic and whether a vaccine can arrive soon to help the economy heal.

The last two days of gains for Wall Street have helped the US S&P 500 recover roughly half its 5.6 per cent loss from last week, which was its worst since the market plunged in March as the coronavirus pandemic took hold.

Markets around the world were rattled in 2016 as results in the presidential election suggested Donald Trump was running ahead of Hillary Clinton. The S&P 500 slumped early the following day, but ended 1.1 per cent higher.