High noon for Manchester: Ministers give Andy Burnham until 12pm to agree to enter Tier 3 lockdown or they will FORCE the city in – but mayor slams government using ‘selective statistics’ to raise public fears

Ministers are threatening to force Greater Manchester into Tier 3 lockdown at 12pm tomorrow unless local leaders agree to impose economy-wrecking shutdowns before then.

Up to 10 million people now face the toughest restrictions tomorrow after talks on whether the region should enter the ‘very high risk’ Tier 3 ended in deadlock again today.

No10 has tried to pressure Manchester Mayor Andy Burnham into accepting the economy-wrecking measures with warnings that the region’s intensive care beds could be overrun by the middle of November.

So far only Merseyside and Lancashire, with a combined population of three million are in Tier 3, which requires the closure of pubs and other venues considered risky.

A further 5.3 million in Scotland and Northern Ireland are already under even more draconian restrictions, while 3.1 million in Wales will be placed under full lockdown from Friday night.

Manchester Mayor Andy Burnham earlier said that they still wanted agreement on a financial support package before agreeing to go into the highest, Tier 3 restrictions.

But in a statement released tonight, Robert Jenrick said that he had written to local leaders giving them until midday tomorrow to reach an agreement on the introduction of Tier 3 restrictions.

The Communities Secretary blamed Mr Burnham for the ‘deteriorating public health situation in Greater Manchester’ and warned the Government would ‘take action urgently’.

But the Manchester Mayor hit back tonight, blasting the Government’s dubious use of ‘selective statistics’ to spread fear and panic ‘about the NHS in Greater Manchester’.

Mr Jenrick said: ‘There are now more Covid-19 patients in Greater Manchester Hospitals than in the whole of the South West and South East combined.

‘But, unfortunately, despite recognising the gravity of the situation, local leaders have been so far unwilling to take the action that is required to get this situation under control.

‘I have written to local leaders this evening to make clear that if we cannot reach agreement by midday tomorrow then I must advise the Prime Minister that despite our best endeavours we’ve been unable to reach agreement. It’s not too late for local leaders to work with us to take action for the sake of the people of Greater Manchester.’

Wales and Ireland today announced plans to impose lockdowns in a bid to suppress Covid-19, with Irish premier Micheal Martin restricting movement to a 5km radius despite Ireland recording no new deaths today.

Labour’s Welsh chief Mark Drakeford plunged the country into a two-week ‘firebreak’ lockdown which will see bars, restaurants and all non-essential shops close from 6pm on Friday. 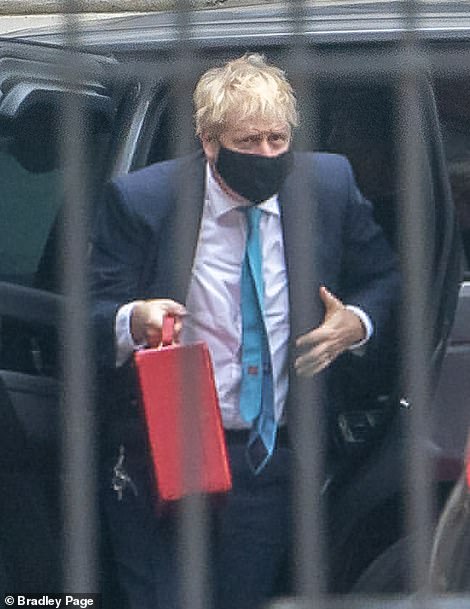 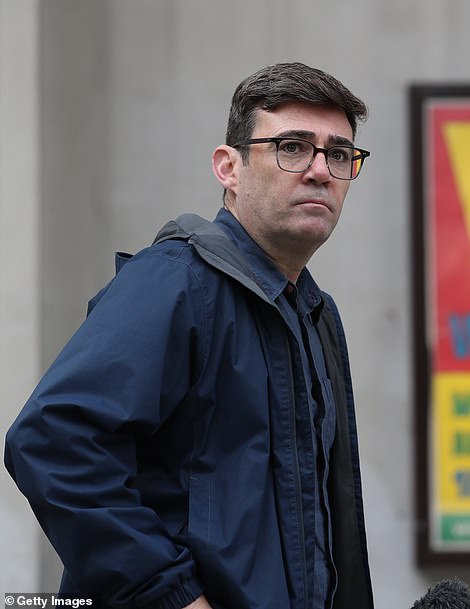 The leader of Manchester council yesterday called for the return of shielding, saying it would be more effective in fighting coronavirus than ‘blanket business closures’.

Sir Richard Leese said there should be more focus on protecting those who would be most at risk. As one of two deputy mayors, he speaks on health matters across Greater Manchester. In his blog, he said medics now know those most at risk of hospital admissions: the elderly and those with underlying conditions such as diabetes, obesity, and respiratory illnesses.

‘Wouldn’t it be much better to have an effective shielding programme for those most at risk, rather than have a blanket business closure policy of dubious efficacy?’ he wrote.

However, charities said shielding would only work if accompanied by financial support and measures to cut the transmission rate.

The Prime Minister had previously said he wants to gain the ‘consensus’ of local leaders before moving them into Tier 3.

Ministers fear public confidence in restrictions will be damaged if they do not get their support.

But after more than a week of talks, Whitehall sources last night indicated that the PM felt he had no choice but to take action in Greater Manchester to tackle the ‘health emergency’ there.

In a gloomy statement, a Government spokesman described the talks as ‘disappointing’, adding: ‘This is particularly concerning against the backdrop of rising cases and hospitalisations in Greater Manchester. We are carefully considering next steps.’

Ministers have been exasperated by the stance adopted by Andy Burnham, the Labour Mayor of Greater Manchester, who has led opposition to Tier 3 status.

On Sunday, the Cabinet Office minister Michael Gove accused him of ‘posturing’.

And yesterday, Downing Street published new data on the health crisis in the region in an attempt to persuade him to back down.

However, the move is also opposed by local Tory MPs.

One of them, Sir Graham Brady, chairman of the 1922 Committee of backbench MPs, yesterday told Mr Hancock he remained ‘sceptical it will make a difference’.

The PM’s spokesman said that in the ‘best case scenario’ modelled by Government scientists, all free intensive care capacity would be used by October 28 and would pass the peak of the first wave by November 2.

However, No 10 acknowledged that the figures do not include capacity in Nightingale hospitals.

Mr Burnham has been pushing for the furlough scheme to be extended to ensure those whose employers are forced to close receive 80 per cent of their income rather than the 66 per cent on offer from its successor scheme.