Labour shadow minister under pressure over claims of anti-Semitic song

Dan Carden allegedly sang each verse with the words ‘Hey Jews’ on a chartered bus full of Labour MPs and journalists last year.

He denied the allegations following initial claims on Saturday – but now a second witness has handed over WhatsApp messages that appeared to corroborate the claims. Messages passed to The Sunday Times claimed Mr Carden had drunkenly sung ‘nasty’, ‘anti-Semitic and homophobic’ songs.

The second witness, who asked to be anonymous, supported the claims with mobile phone messages chronicling the bus journey. 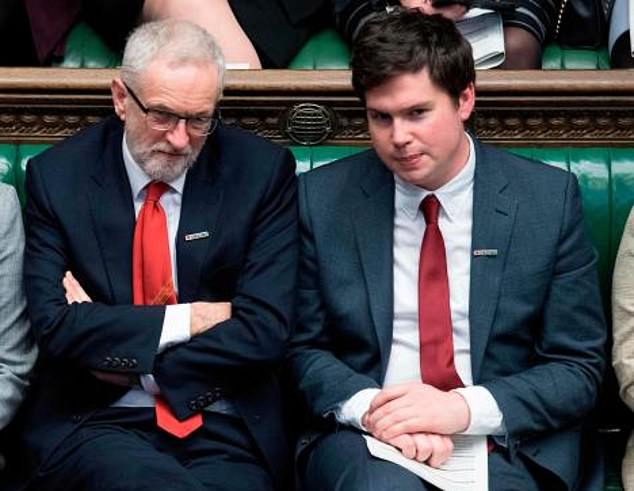 Development spokesman Mr Carden, 33, is said to have sung the offensive lyrics while on a private bus to London from the Cheltenham races in March last year.

In response to initial claims about the incident, he said: ‘I have been categorical in my denial about allegations relating to a coach trip some 20 months ago. This was a coach full of journalists and MPs. If anyone genuinely believed any anti-Semitic behaviour had taken place, they would’ve had a moral responsibility to report it immediately.’

He added: ‘I stand by my record as an anti-racist campaigner. I would never be part of any behaviour that undermines my commitment to fighting racism in all its forms.’ The messages also allege the Labour frontbencher, who is seeking to be re-elected as the MP for Liverpool Walton, and two others sang ‘we hate the gays’. Former Labour whip Conor McGinn, 35, is said to have repeatedly described a male Labour colleague who had slumped on to him on the coach while sleeping as a ‘poof’.

The claims emerged as a string of Labour’s election candidates were caught up in controversy. After a dismal week, Jeremy Corbyn campaigned at the weekend for an election hopeful accused of comparing celebrating the death of Tony Blair to that of Adolf Hitler. 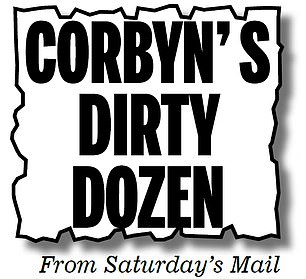 The comments by Jane Aitchison, the candidate for Pudsey, West Yorkshire, came as she tried to defend another Labour hopeful, Zarah Sultana – who posted online that she would ‘celebrate’ the deaths of Tony Blair and Benjamin Netanyahu, Israel’s PM. She has apologised for the 2015 message.

In a further blow for Labour, a Jewish former gulag prisoner yesterday said Mr Corbyn’s stance on Israel and Zionists was reminiscent of the anti-Semitic rhetoric adopted by Stalin’s Soviet Union.

Natan Sharansky, 71, who went on to become Israel’s deputy prime minister, said he was concerned that anti-Semitism has moved from the ‘extremes’ of Britain to ‘the mainstream’.

Mr Sharansky, who was sent to a Soviet labour camp after being denied permission to leave for Israel, told The Sunday Telegraph that Mr Corbyn’s ‘extreme anti-Zionism’ was ‘almost impossible to differ sometimes from anti-Semitism’. He said he hears ‘all the time’ from British Jews preparing to move due to concerns about a future Corbyn-led government.

The Labour leader vowed to investigate the claims about Mr Carden, which were published on the Buzzfeed news website.

He said the allegations were ‘totally unacceptable’ if true. 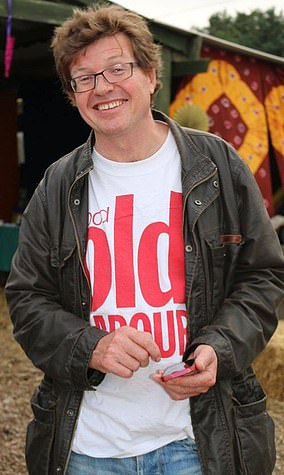 Israel was likened to a terrorist state by the Labour candidate for North West Cambridgeshire.

Ed Murphy also shared images of a flag where the Star of David was replaced by a skull and crossbones.

In one tweet in July 2014 he claimed that the Israeli armed forces were backed by the Conservatives on Peterborough Council. He posted: ‘Israel a terrorist state? And Israeli military (secretly backed by the Cons on Pboro Council) are international pirates.’

The tweet, which he deleted last week after other election candidates became embroiled in similar social media scandals, was accompanied by the image of the Israeli flag turned into a symbol of piracy.

The Labour candidate, who is hoping to unseat former Conservative Party vice-chairman Shailesh Vara, shared the image on Twitter twice more in 2015 with the hashtag #MilitaryStatePirates.

Mr Murphy, a long-serving councillor who lives in Peterborough, posted on Facebook last week: ‘I’m a well-known and popular politician with a winning reputation.’

A Labour candidate helped spread conspiracy theories about the Salisbury spy poisonings that sought to absolve Moscow from blame.

Pamela Fitzpatrick used Twitter to share a link to a blog complaining about the ‘campaign of vilification’ against Russia.

In her tweet, she wrote: ‘Can we have some answers Theresa May?’ The post claimed the Government’s attempt to blame the Kremlin for the poisoning of ex-intelligence officer Sergei Skripal and his daughter Yulia was part of a ‘shoddy and deceptive’ anti-Russia campaign.

It warned that ‘foolish’ people had been taken in by the UK’s ‘nonsensical allegations’.

Backing: Pamela Fitzpatrick with John McDonnell. Miss Fitzpatrick used Twitter to share a link to a blog complaining about the ‘campaign of vilification’ against Russia

Miss Fitzpatrick, who is standing in Harrow East, north-west London, apologised last night. She said she shared the blog ‘without properly reading it’ and was now ‘mortified’.

‘It doesn’t represent my views then or now,’ she said. Miss Fitzpatrick, a councillor in Harrow, has also re-tweeted posts defending Jeremy Corbyn over his handling of Labour’s anti-Semitism crisis.

She was selected as the parliamentary candidate after Shadow Chancellor John McDonnell told local activists she was their ‘best hope’. 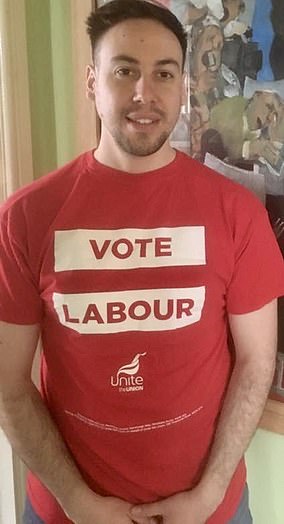 A union-backed candidate supported a Labour MP who said the party should stop saying sorry over anti-Semitism.

Keir Morrison, pictured, retweeted messages in support of Chris Williamson, who was suspended after claiming Labour had been ‘too apologetic’ in its response to anti-Semitism. Mr Williamson has now been barred from standing for the party in the election.

The posts described the scandal as a ‘media myth’ and urged Labour’s National Executive Committee to reinstate Mr Williamson.

Mr Morrison, a local councillor who is backed by the Unite union, has now deleted all of the tweets he posted before October 18. When asked why by one of his followers, he replied: ‘Nothing to hide here, there are a number of reasons, too many to list here’. Mr Morrison replaced moderate Sally Gimson in Bassetlaw, Nottinghamshire, after she was stripped of the candidacy by a committee in London last week. He allegedly once wore a T-shirt suggesting he would celebrate Margaret Thatcher’s death.

Theresa May has a gun held to her head in this disturbing doctored image shared by a Labour candidate.

The former PM winces as she is threatened to stop saying the words ‘strong and stable’.

It echoes a scene in the movie Pulp Fiction in which hitman Samuel L Jackson points a handgun at a victim who keeps repeating ‘what?’ 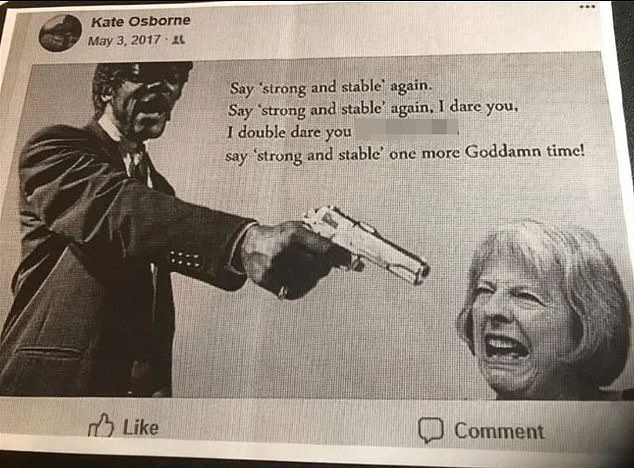 A fake image of Pulp Fiction’s Samuel L Jackson holding a gun to Mrs May’s head. The former PM winces as she is threatened to stop saying the words ‘strong and stable’ 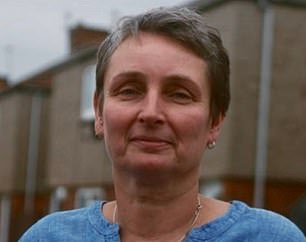 Kate Osborne, a candidate for the safe seat of Jarrow, Tyne and Wear, appeared to post the ‘deeply concerning’ image on Facebook

Kate Osborne, a candidate for the safe seat of Jarrow, Tyne and Wear, appeared to post the ‘deeply concerning’ image on Facebook during the 2017 general election campaign.

Labour education spokesman Angela Rayner, who has faced abuse and death threats during her political career, described the post as ‘totally unacceptable’.