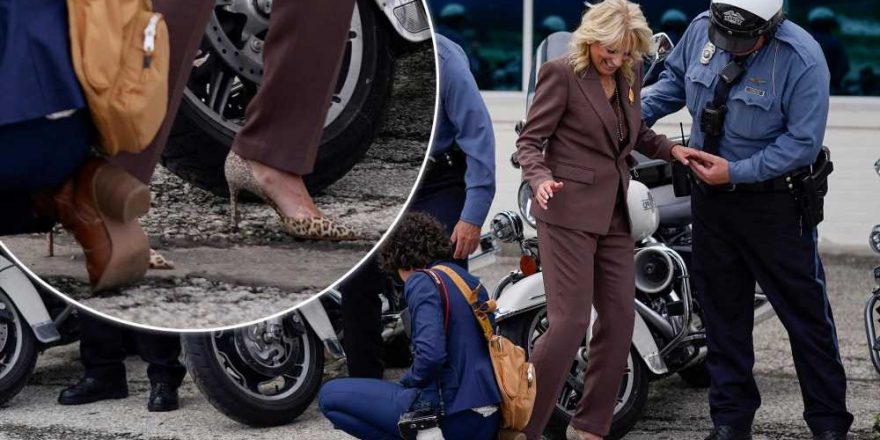 Big buck$ Biden: Prez, VP release tax returns — here’s how much they made

First lady Jill Biden needed some assistance from staff after the heel of her shoe became stuck in a crack in the pavement during a visit to Kansas City, Mo., Thursday.

The moment occurred at the Charles Wheeler Downtown Airport, as the first lady was walking toward a group of officers with the Kansas City Police Department’s motorcycle unit to take pictures.

As she reached the center, the heel of her leopard print pumps became stuck in the pavement.

The first lady was quickly assisted by one of her staffers, who bent down to free the shoe from the concrete crevice.

The officer standing closest to her offered his hand for balance to Biden, who laughed off the incident.

The pumps did not appear to sustain any damage during the first lady’s walk to the plane, which was en route back to Washington, DC.

A spokesperson for the first lady said the office did not comment on her wardrobe.

In addition to the shoes, Biden rocked a chocolate brown blazer with matching tailored trousers as she visited a community college and a vaccination clinic.

The first lady is typically known for dresses and skirts, making the pantsuit a changeup from her usual look.