Inside Blinken and Austin's risky, secret visit to Ukraine

In the quiet weekend morning hours Saturday, two of President Joe Biden's top advisers boarded their flights — the start of a long journey shrouded in secrecy.

It was a secret — until Ukrainian President Volodymyr Zelenskyy spilled just hours after they were wheels up. Secretary of State Antony Blinken and Defense Secretary Lloyd Austin were coming to visit Kyiv, the war-time president announced.

While the Biden administration refused to comment all weekend, it was a hiccup that could have derailed the secret visit, amid intense security concerns about sending two Cabinet officials to an active war zone.

In the end, Blinken, Austin, and a small delegation arrived in Kyiv Sunday for a three-hour meeting with Zelenskyy, carrying with them a number of major announcements to make — millions more in U.S. security assistance, increased U.S. training for Ukrainian troops, the return of U.S. diplomats to Ukraine, and after three years of vacancy, a nominee for a new U.S. ambassador. 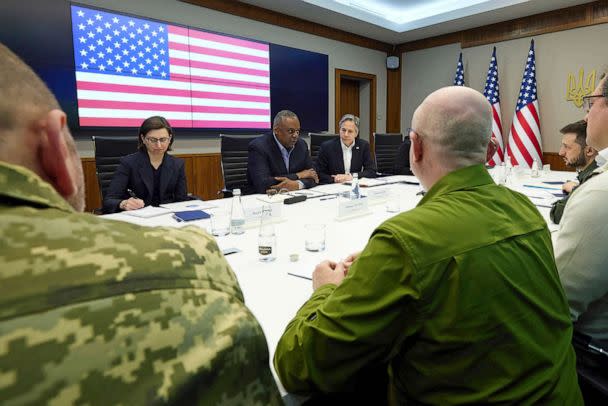 Senior State and Defense Department officials dismissed any concerns that Zelenskyy's announcement imperiled the trip: "We plan for any number of contingencies. … It didn't change anything about our commitment to go there today and to share what we have to say," a senior State Department official told reporters Sunday.

But the administration refused to confirm the trip took place until the early morning hours Monday — only when the U.S. team returned across the border in Poland.

"We don't know how the rest of this war will unfold, but we do know that a sovereign, independent Ukraine will be around a lot longer than Vladimir Putin is on the scene, and our support for Ukraine going forward will continue," Blinken told reporters Monday morning in Poland.

The visit was the first by senior U.S. officials since Russia's invasion started 60 days ago — "part symbolism but also very substantive," Blinken said as he sat across the table from Zelenskyy.

That substance was in what he and Austin carried with them, including $165 million for Ukraine to purchase ammunition for its Soviet-era weaponry and $322 million for Ukraine to purchase from defense firms — what's known as foreign military financing. In total, the Biden administration intends to obligate more than $713 million in foreign military financing for Ukraine and 15 other European countries, virtually all of whom have supported Ukraine's military from their own stockpiles.

Blinken also announced Biden would formally nominate Bridget Brink, a career diplomat currently serving as U.S. ambassador to Slovakia, to serve as envoy in Kyiv. U.S. diplomats will eventually return to the capital too, Blinken said, as they start this week by making the journey across the border from Poland to Lviv on a daily basis. 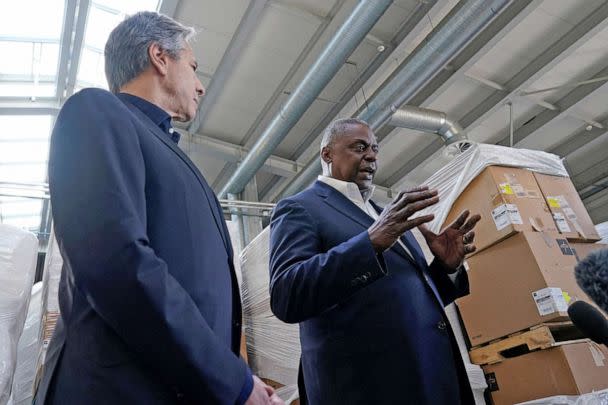 It's a journey Blinken and Austin now know personally. They arrived in southeastern Poland Saturday evening near the border with Ukraine — riding the train to Kyiv in the opposite direction from the nearly three million Ukrainian refugees who've arrived in Poland.

As passengers, they saw little of the war-torn country, according to a senior State Department official, who said shades on the windows blacked out much of the view.

Once in the capital, no longer under Russian siege, Blinken said there were signs that normal life was returning.

"We certainly saw people on the streets in Kyiv — evidence of that fact that the battle for Kyiv was won, and there is what looks from the surface at least to be normal life," he told reporters afterwards. "But that's in stark contrast to what's going on in other parts of Ukraine — in the south and the east — where the Russian brutality is doing horrific things to people every single day."

From the train, they traveled straight to the presidential palace for three hours of meetings with Zelenskyy and his team, according to a senior State Department official, including Foreign Minister Dmytro Kuleba, Defense Minister Oleksii Reznikov, and Andriy Yermak, head of the Office of the President.

"We had a really good, detailed, substantive, focused conversation for the better part of three hours that really went into every aspect of this campaign and next steps," the senior State Department official said.

It was the first time senior U.S. officials had seen Zelenskyy since Russia invaded — a chance to check in on the TV star, who won a surprising presidential election, and who's become a wartime leader and world figure.

When a U.S. delegation visited Zelenskyy last May — the first meeting between Biden officials and a Ukrainian president already bruised by American politics — Zelenskyy was "constantly energized, moving from one thing to another," the senior State Department official said.

"Now, there's a deliberateness and a kind of gravitas," they said, describing him as "very focused, very detail-oriented on different aspects of this, whether the security, the economic, the humanitarian, the sanctions. He went into real detail on each, but in a very deliberate way."

Even physically, he "looked remarkably well," the official added.

When the U.S. delegation asked about his family, Zelenskyy said they were doing ok, but "'the hard part is we just don't see each other. We miss each other,'" the official recounted him saying.

"It was just a kind of human moment. Everyone in this thing is an individual with their own individual lives and family lives," they added. "He's going from being a TV celebrity to maybe the most recognized leader — other than the president of the United States and Vladimir Putin — in the world. He's borne that remarkably well."

An in-person conversation makes working through any differences easier, officials said — including Zelenskyy's push for the U.S. to designate Russia a state sponsor of terrorism. The designation, made by the State Department, carries the strictest U.S. sanctions, although Russia is already under many of them.

The designation is for governments that support terrorist groups, not ones that terrorize, per the senior State Department official, who said during their talks, they explained State Department lawyers are reviewing the possibility, "but it's a statute. It's a legal determination."

"Look, the Russians are terrorizing the Ukrainians. But that's different than saying they meet the criteria of the SST [state sponsor of terrorism designation]."

But if face-to-face interactions are that important, it begs the question why didn't Biden himself go. Another senior State Department official pointed to security concerns.

"The president of the United States is somewhat singular in terms of what travel would require, so it goes well beyond what a cabinet secretary would – or what virtually any other world leader – would require."

Inside Blinken and Austin's risky, secret visit to Ukraine originally appeared on abcnews.go.com