‘Influenza is back’: Victoria gets first flu season for three years

Victoria has recorded more cases of flu in the past few days than the whole of last year, as influenza returns after being seen off by COVID pandemic border closures.

There wasn’t a single community acquired case of the flu detected in Victoria in 2021, with all the 109 recorded cases found in returned travellers, according to Professor Kanta Subbarao, the director of the World Health Organisation’s Collaborating Centre for Reference and Research on Influenza. 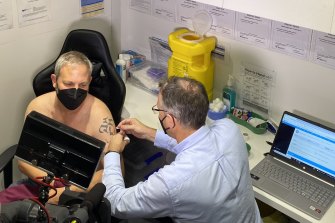 Subbarao said while it was now clear “we will have an influenza season” – the first in three years – “how severe that season is, is something that will be very hard to predict”.

There have been 886 cases of influenza recorded in Victoria this year, including hundreds in recent days.

Among those cases have been people so unwell they have required hospitilisation, The Age can also reveal.

Former deputy chief health officer Professor Allen Cheng, an infectious diseases doctor involved in a project monitoring flu and other respiratory diseases in hospitals, says there have been more than 50 cases of the flu admitted to Australian hospitals this year, a lot of them in recent weeks.

Last year, there were only about six cases reported in 22 hospitals across the country, some which may have been false positives, he said. Cheng said there would easily be 100 flu admissions a week in the middle of a normal flu season. 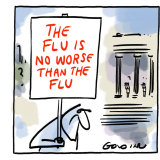 Doctors now say it is extremely important people have a flu vaccine soon, despite a level of “vaccine fatigue” as a result of repeated COVID-19 jabs.

Chief Health Officer Brett Sutton said Victorians had been a bit lucky to have skipped two flu seasons “and it’s probably not front and centre in people’s minds”.

“All I can say is don’t wait for those flu stories to arise, that will be too late,” said Sutton, as he had his flu shot at a small pharmacy in Melbourne’s CBD on Friday.

A startling silver lining of the pandemic in Australia has been the crushing impact border closures and other measures have had on influenza activity.

While other viruses persisted, and COVID-19 repeatedly proved so hard to control it was able to escape hotel quarantine, the flu disappeared to the point scientists in Melbourne who relied on thousands of local influenza samples to help them formulate flu vaccines had to source samples elsewhere.

Most experts say it’s too early to know if the 2022 season will be particularly big or deadly.

“Some people think that because we haven’t had the flu for the last couple of years, then a lot of people’s immunity will be waning, and we could be in for a big year,” Cheng said.

But he also noted that the Northern Hemisphere’s flu season “fizzled out” when the Omicron variant of COVID-19 emerged over winter, and influenza activity is currently low in Britain.

“I would hope people, if they have influenza-like illness systems, might be more likely to stay at home and not spread it to their workmates or to family and friends,” said Professor Nigel Stocks, the director of a network of GPs that report on rates of influenza symptoms in patients.

The University of Newcastle’s Dr Craig Dalton, the founder of FluTracking, said even in places in the US where there weren’t strong pandemic measures during 2021, there were some reductions in flu cases.

Although cases of the flu are considerably higher than they have been in recent years, they still remain low to moderate compared to before the pandemic. For example, three years ago, at the beginning of the severe 2019 flu season, there were almost 950 cases detected in Victoria in a single week.

The vaccine is free for those considered most vulnerable to the flu, including children aged under five, older adults aged over 65, pregnant women and those with underlying health conditions such as cardiac disease.

Cut through the noise of the federal election campaign with news, views and expert analysis from Jacqueline Maley. Sign up to our Australia Votes 2022 newsletter here.