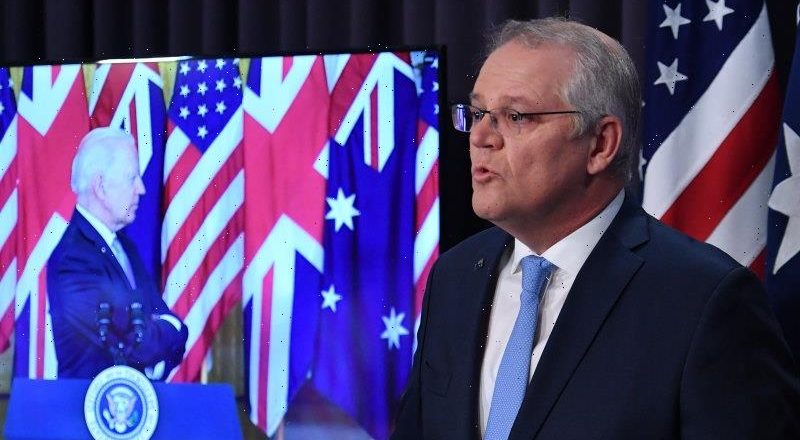 Washington: How remarkable to think that just a few weeks ago Australians were feeling slighted by a lack of attention from the Biden administration.

As the 20-year war in Afghanistan came to its ignominious end last month, President Joe Biden did not pick up the phone to call Prime Minister Scott Morrison until after the final US troops had left Kabul. It seemed a shoddy way to treat a close ally that had sacrificed 41 lives in the war effort.

And it stung that America did not send any spare vials from its abundant supply of Pfizer vaccines down under, forcing the Morrison government to cut a deal with Poland to access its soon-to-expire doses. 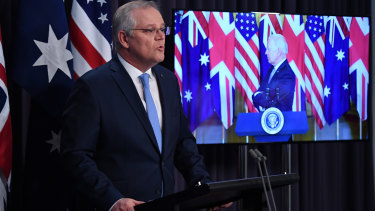 Now a country that takes inordinate pride in “punching above its weight” on the global stage is very much doing so again.

The new AUKUS partnership represents a dramatic strengthening of ties between three already close allies: the United States, Australia and the United Kingdom. The fact the partnership was announced at a rare virtual joint press conference between the three leaders – rather than an anodyne media release – underscored its importance.

The announcement came a day ahead of the AUSMIN meetings in Washington between Foreign Minister Marise Payne and Defence Minister Peter Dutton and their US counterparts Secretary of State Antony Blinken and Defence Secretary Loyd Austin. A further deepening of defence ties, including an expansion of the US military presence in northern Australia, is expected to be announced after their meetings.

Then next week in Washington, Morrison will attend the first ever face-to-face leaders meeting of the “Quad” nations – the US, Australia, India and Japan. Significant announcements are expected on vaccine diplomacy and infrastructure. To paraphrase Bob Hawke, it’s not bad for a nation of 25 million people at the arse-end of the world.

It will be hard, if not impossible, for any subsequent announcement to match the significance of the new AUKUS partnership and its first major outcome: an agreement to allow Australia into the elite club of nations with nuclear-powered submarines. Many countries have tried for decades to access America’s submarine secrets and have been rebuffed each time.

And that’s just the beginning. The three nations have committed to work together on cyber, artificial intelligence, missile capabilities and supply chains – a strikingly ambitious and far-ranging portfolio.

In practical terms, AUKUS may prove to be vastly more significant than the ANZUS treaty which is largely symbolic and has only been invoked once in its 70-year history (by former prime minister John Howard following the September 11 attacks).

In a briefing with reporters, a top Biden administration official described AUKUS as “the biggest strategic step Australia has taken in generations”. It’s a big call, but not necessarily a hyperbolic one when you consider the scope of the trilateral partnership and the significance of the submarine agreement.

There’s a common thread between AUKUS, the AUSMIN meetings and next week’s Quad summit. Australia is seizing a position as a central player in the great geo-strategic battle of our times: the struggle between the United States and China to dominate the 21st century.

And there’s no doubt which side of that struggle we are on. Australia is being given access to highly-prized submarine technology for the same reason the Biden administration has elevated the status of the Quad and is looking to expand its military presence in Australia. It wants to push back on China’s growing influence in the Indo-Pacific and believes Australia can help it achieve that aim.

Prominent academics and former politicians like Paul Keating have argued that Australia needs to assert more independence from America and avoid antagonising China, its biggest trading partner. Such calls have been ignored: the AUKUS partnership confirms that Australia is going all the way with the US in what many have labelled a new “cold war” with China.

Taking this position carries risks as well as rewards – as Australian exporters have already learned via Chinese tariffs on their products.

“The Chinese will view this as provocative, and they should,” Former US Director of National Intelligence James Clapper said after the announcement.

Punching above your weight is something to be proud of, but you have to be prepared to be hit back.