In a ‘major loss’ for Fox News, anchor Chris Wallace leaves for CNN

CNN’s announcement that Wallace will join CNN+ as an anchor came within two hours of his last Fox show. The streaming service is expected to debut in early 2022. 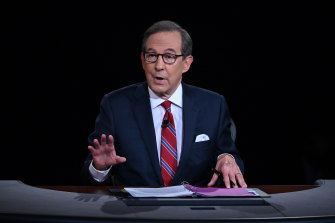 “It is the last time, and I say this with real sadness, we will meet like this,” Wallace, who is 74, said on his show, which airs on the Fox network and is later rerun on Fox News Channel.

“Eighteen years ago, the bosses here at Fox promised me they would never interfere with a guest I booked or a question I asked. And they kept that promise.”

Wallace was a veteran broadcast network newsman, working at both ABC and NBC News, before the late Roger Ailes lured him to Fox with the promise of his own Sunday show.

Methodical and never showy — in contrast to his father Mike, the legendary 60 Minutes (US) reporter — Chris Wallace was known for his methodical preparation and willingness to ask hard questions of all guests.

He was the first Fox News personality to moderate a presidential debate, doing it in 2016 and 2020. The debate he moderated last year went off the rails when then-president Donald Trump repeatedly interrupted Democratic challenger Joe Biden.

“He is the most tenacious interviewer in the television business, based on intense preparation and plain old persistence,” said Howard Kurtz, host of Fox’s “Media Buzz.”

“He has the kind of seasoned judgment that only comes from so many years of covering political issues and he may be the best debate moderator ever.”

Kurtz said it was “a major loss for Fox News, no question about it”.

Wallace generally co-existed with Fox’s opinion side and infrequently took them on publicly, although in 2017 he said it was “bad form” when opinion hosts bashed the media.

“I have been free to report to the best of my ability, to cover the stories I think are important, to hold our country’s leaders to account,” Wallace said Sunday. “It’s been a great ride.”

His announcement even took the guests on his show Sunday by surprise; they were not tipped off ahead of time. Fox said a series of rotating guest news anchors will take over for Wallace until a permanent host is named.

Wallace was one of a prominent triumvirate of straight news anchors at Fox who offered a contrast to popular opinion hosts such as Tucker Carlson and Sean Hannity. Shepard Smith left in 2019 and is now doing a news show at CNBC. Bret Baier remains at Fox as host of a Washington-based evening news program.

In contrast to when Smith left, Wallace was coming to the end of his contract with Fox, said a network executive who spoke on condition of anonymity because the person was not authorised to publicly discuss the issue.

Until a successor is named, Fox said Wallace will be replaced by a rotating series of guest anchors, including Baier, John Roberts, Shannon Bream, Martha MacCallum, Neil Cavuto, Dana Perino and Bill Hemmer.

There was a report from NPR this fall that Wallace and Baier had objected to Fox executives about some of the more strident opinion programming, particularly Carlson’s documentary on the January 6 Capitol insurrection, Patriot Purge, that aired on Fox’s streaming service.

Wallace said that he wanted to “try something new, to go beyond politics to all the things I’m interested in.”

In CNN’s announcement, he said, “I look forward to the new freedom and flexibility streaming affords in interviewing major figures across the news landscape — and finding new ways to tell stories.”

CNN said more details about Wallace’s new role will be forthcoming. He’s the biggest name among the hires at CNN+, which has also brought on former NBC News anchor Kasie Hunt and business journalist Scott Galloway.