Hurricane Laura is set to make landfall as a Category 4 storm Wednesday night. Here are the 18 strongest Atlantic hurricanes in history. 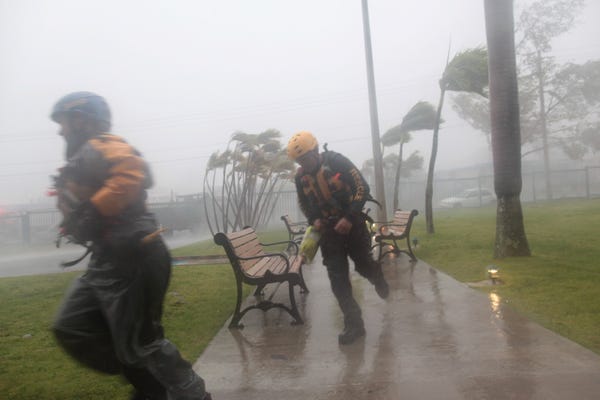 Hurricane Laura is expected to make landfall near the Texas-Louisiana border on Wednesday night. Its wind speeds are hovering 145 mph.

If the winds stay that strong, the storm will become part of a small group: Only 13 hurricanes in US history have ever made landfall at or above 145 mph, according to Philip Klotzbach, a meteorologist at Colorado State University.

Wind speed is the primary way meteorologists measure a storm's intensity — it's what determines the categories on the Saffir-Simpson scale. Right now, Laura's a Category 4 storm; anything Category 3 and above is considered a major hurricane.

Although Hurricane Laura's landfall is expected to bring life-threatening storm surge and extremely dangerous conditions, it likely won't be one of the strongest Atlantic hurricanes ever based on wind speed alone.

The chart below ranks the strongest Atlantic hurricanes based on sustained winds.

Wind speeds aren't the only cause of a hurricane's strength

Hurricanes with faster wind speeds are usually, more destructive than those with slower winds. But that's far from the only factor that determines how destructive a storm can be.

For instance, Hurricane Katrina, the most destructive hurricane in US history, had sustained wind speeds of 125 mph when it made landfall near the Louisiana-Mississippi border.

But Katrina brought a deadly, 20-foot-high wall of water to New Orleans, which caused levees to break and 80% of the city to flood. Storm surges like that happen when a storm pushes water levels above the normal tide line; in Katrina's case, that storm surge accounted for a majority of the 1,800 deaths the hurricane caused.

"Imagine having a high tide that is 30 feet (9.1 m) higher than normal," scientists Orrin Pilkey and Rob Young wrote in their book, "The Rising Sea." "Now, imagine there are hurricane-driven waves on top of that extra-high tide. That is the impact of the storm surge."

Climate change is increasing the chances that storms develop high wind speeds. A recent study based on satellite data showed that each new decade over the last 40 years has brought an 8% increase in the chance that a storm turns into a major hurricane.  A study from 2013, meanwhile, found that for each degree the planet warmed over the previous 40 years, the proportion of category 4 and 5 storms  increased by 25% to 30%.

"Almost all of the damage and mortality caused by hurricanes is done by major hurricanes," James Kossin, an atmospheric scientist at NOAA and the lead author of the first study, told CNN. "Increasing the likelihood of having a major hurricane will certainly increase this risk."