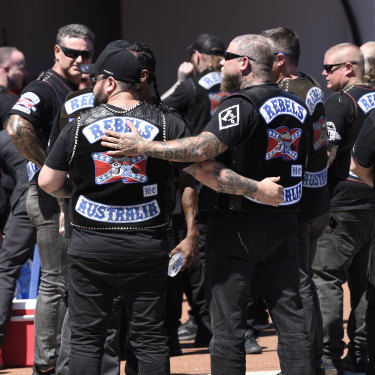 Rebels MC members embrace outside of the North Perth funeral where the body of slain boss Nick Martin is being kept. Credit:Fairfax Media

A former soldier who executed Rebels bikie boss Nick Martin will spend the next 20 years living in a small prison unit under extremely restrictive conditions, with limited opportunities for exercise or to even see the sky.

The 35-year-old – who cannot be named due to a suppression order – has put a target on his back for the rest of his life, whether in or out of prison, Justice Stephen Hall said while handing down the sentence on Monday.

Justice Hall acknowledged that the shooter’s cooperation with police had been “exceptional” and he deserved a significant discount in his sentence, but warned if he failed to testify against the man who ordered the hit he would be re-sentenced to life with a minimum of 30 years.

The contract killing was meticulously planned, Justice Hall said as he laid out the details of the case.

It was early 2020 and the convicted murderer was volunteering with Shadows of Hope, an American combat charity that specialises in providing medical aid and combat training in war zones. 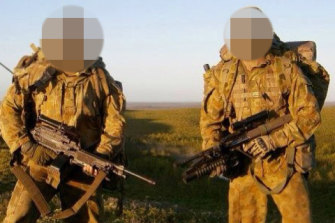 Shooter had previously been to Afghanistan.

Around that time he was contacted by the alleged mastermind of the Martin hit, David James Pye, a Rebels member who had defected to the Commancheros.

After returning from volunteering overseas, he and Pye engaged socially where Pye detailed the “antagonisms and disagreements” between himself and Martin who allegedly had a hit out on Pye.

The sniper claims that Pye offered him $10,000 to plan the murder of Martin, which he accepted then and there.

While assessing the feasibility of the plan, the man accessed Martin’s Instagram and conducted a reconnaissance of his home, which included flying a drone over his property to scout out security measures.

On November 28, 2020, he visited the Perth Motorplex where Martin was a regular patron, and walked around the venue looking at various locations.

He watched Martin and his associates arrive and sit in their usual spot on the north eastern terrace – he was just 10 metres from Martin.

A few days after that initial visit the man suggested the killing could be done at long range.

Pye allegedly offered him $150,000, with half of the money to be paid upfront and the remainder once the job was done.

When he returned home and counted the money it was only $40,000.

On December 9, the man returned to the Motorplex for a second time, however Martin was not present.

He also visited the complex when it was closed and removed an aluminium safety ramp because it interfered with his line of sight to where Martin usually sat. 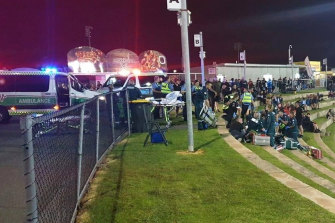 The offender later went to an isolated location and fired 200 rounds at a small target to practice and gather data on the performance of his rifle.

On December 12, 2020, the day of the fatal shooting he changed the wheels on his vehicle and drove to the Perth Motorplex.

About 4.25pm he entered into the venue and walked throughout the complex.

He left and went to a quiet area to gather his thoughts and put false registration plates on his vehicle.

Around 6.33pm he followed Martin into the spectator area and watched as he took his seat.

Martin was seated next to his wife Amanda, stepdaughter Stacey Schoppe – who was dating Rebels Ricky Chapman at the time – and near other associates.

They were part of a 2000-strong crowd that evening.

The shooter put on a camouflage suit, entered the venue through a hole he cut in the perimeter fence and crawled to his pre-arranged shooting position in thick bush.

After checking the wind speed he adjusted his high-powered rifle, which was fitted with a magnifying scope and a range finder.

From 335 metres away, he fired a single round that struck Martin on the left side of his chest. The bullet exited through his back and lodged in Chapman’s left arm.

The shooter left his hiding place without anyone noticing and escaped through the fence.

Martin was treated at the scene but was declared dead at Rockingham Hospital. 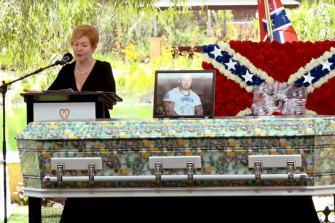 Chapman was taken to Royal Perth Hospital where he had surgery to remove the bullet from his arm.

The shooter claims that when he went to collect the remainder of the money from Pye, he was shortchanged $60,000 from the agreed total to which it was explained that another person didn’t kick in.

About a month after Martin’s killing, on January 15, the offender took the murder weapon to a licensed firearm armourer and instructed them to replace the barrel. He collected the rifle on January 22, 2021.

On February 24, police investigators attended the armourers’ premise and seized the barrel, which ballistics experts concluded matched the projectile removed from Chapman’s arm.

A shoe impression taken as part of the investigation was examined and identified as a Fila brand running shoe.

CCTV footage confirmed the offender was at the Perth Motorplex on numerous occasions, wearing that particular type of shoe.

Mobile phone towers placed him at the sniper position just before Martin’s shooting, with the phone then being switched off.

Police put him under surveillance after he left the gun shop and followed him to bushland in Warnbro where police later found $249,550 buried in PVC pipes.

“The sheer stupidity of that decision has ruined many lives including his own for $150k.”

Around the same time Pye brought up Ray Cilli to the sniper, saying people had been impressed with his murder of Martin and associates were offering $800,000 for him to kill Cilli, who was living in Thailand.

The shooter said he would think about the proposal but did not commit to carrying it out.

On March 15, police swooped and after hearing key evidence against him, the shooter agreed to plead guilty on June 2.

During sentencing, defence lawyer Simon Freitag SC argued that while a contract killing was a very serious offence, his client deserved a significant reduction in his sentence because he had provided significant cooperation to help in the prosecution of Pye.

“He has put a target on his back for the rest of his life,” he said.

“There are many associates in the prison system, and I’m sure they will do their best to keep him safe. But he is facing a significant sentence and every day he’d be concerned someone will attempt to kill him. 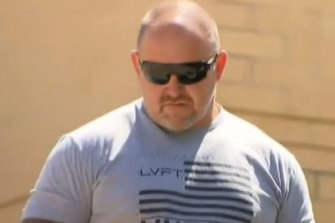 “While he wasn’t initially remorseful it is something he has come to over time,” he said.

“His family and girlfriend have been placed in a protection program, and he can no longer see his girlfriend.

“He has suffered from PTSD and while the causes are not 100 per clear, the death of his mother may have contributed to it and the death of friends due to BASE jumping.”

But state prosecutor Justin Whalley said the intent to kill was unmistakable.

“It was planned and premeditated,” he said.

“He discharged a bullet from a high-powered rifle in a busy public place, the risk of physical injury to those nearby is obvious.

“He knew his wife was next to him, he murdered a man in front of his family.

“He has placed a monetary value on a life to justify killing a fellow human being demonstrates chilling disregard for human life.

“The sheer stupidity of that decision has ruined many lives including his own for $150k.

“He could have made that in one year working FIFO.

“It’s also had a profound and devastating effect on Martin’s family.“

In a letter to the court, the man said he regretted his actions, did not need the money, and was ashamed that he was used as a tool to exact someone else’s revenge.

Hall sentenced the man to 20 years, backdated to March 15. He will be eligible for parole after serving 18 years.