Home » World News » How did we get here? Everything you need to know about the Djokovic mess 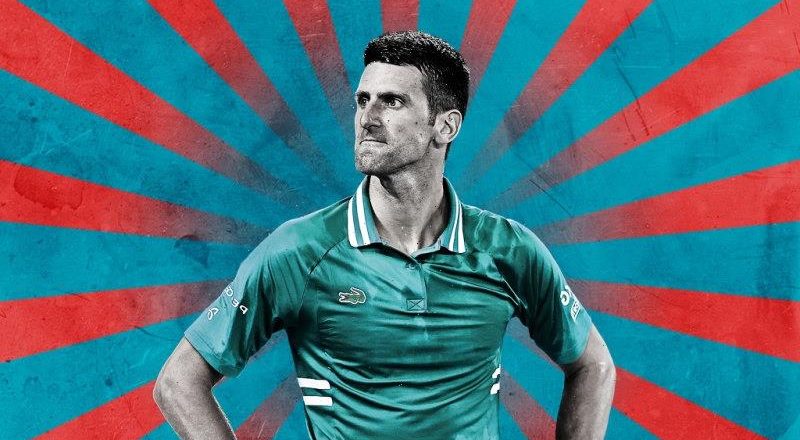 How did we get here? Everything you need to know about the Djokovic mess

Novak Djokovic, the King of Melbourne Park, is embroiled in a royal mess. Here’s how a saga many months in the making reached a dramatic climax.

Novak Djokovic flew into Melbourne on Wednesday to defend his Australian Open title. The next day, the men’s world No. 1 tennis player was sitting in detention in a Melbourne hotel, fighting deportation after his visa was cancelled.

It followed hours in an airport interrogation room and a confusing row between the state and federal governments, as well as Tennis Australia, over the rules for holding a grand slam in a pandemic – one that has quickly spiralled into a flashpoint on vaccine mandates worldwide.

Djokovic’s family in Serbia now say Novak is being “held captive” by politics, not public health, as two blind panels had already granted him an exemption to compete in Australia unvaccinated. But the federal government says his grounds for applying – having caught COVID in the past six months – was not enough to qualify for quarantine-free entry to Australia.

Border Force has launched an investigation into why at least one unvaccinated tennis player and one official have already been let into the country under the same rules, while a last-minute court injunction means Djokovic can stay in the country until Monday afternoon to plead his case. 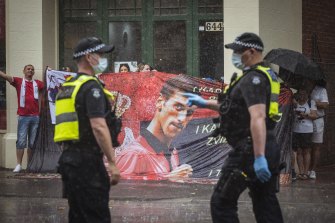 Novak Djokovic supporters protest outside the Park Hotel on Friday where he is being held by Border Security, along with refugees in detention. Credit:Chris Hopkins

How did we get here?

As the tennis world’s most high-profile vaccine sceptic, the spotlight has been on Djokovic since the pandemic began. His preference for alternative treatments over conventional medicine was already well known, though he is not the first tennis champion to seek them out. After elbow surgery in 2018, Djokovic admitted he “cried for three days” because he was “not a fan of surgeries or medications” and tried “to be as natural as possible”, and he has been linked to the former real estate agent-turned-nutritionist Chervin Jafarieh, who spruiks unproven supplements.

In April 2020, when talk began about COVID-19 vaccine mandates for travelling tennis players, Djokovic said he would struggle with such a decision because he is “personally opposed to vaccination”, though he added that he was not an expert. Months later, he stressed that he is not against all vaccines, rather he does not want to be forced to take one. It followed criticism, notably from Australian player Nick Kyrgios, over Djokovic’s decision to organise a charity tournament in Eastern Europe during the height of the pandemic in June 2020, where several players, including Djokovic himself, caught COVID.

The tennis star is now chasing a 10th Australia Open win – that would take him past rivals Roger Federer and Rafael Nadal, with whom he is tied for the men’s record of 20 grand slam titles. But Djokovic had repeatedly refused to disclose his COVID vaccination status in the lead-up to this year’s Open, the first major of the season, even as players including Tennys Sandgren cited the vaccine mandates as their reason not to compete. In October, he batted away questions over his status as “inappropriate” while Victorian Premier Daniel Andrews warned: “The virus does not care what your tennis ranking is”.

While the federal government had said last year that players could apply for medical exemptions from vaccination, the Victorian government at first ruled out players competing who weren’t double-vaxxed, stressing exemptions were not loopholes. The state government later set up two blind panels with organiser Tennis Australia to allow experts to review applications for medical exemptions for players and staff attending the Open. Tennis Australia boss Craig Tiley had initially raised concerns that a vaccine mandate could turn away some top players. But Tennis Australia had already listed Djokovic on the draw by the time his vaccine status was revealed – indirectly – on Tuesday. The player announced on Instagram that he was competing in the Open down under after all “with exemption permission”.

So, what happened at the border?

Djokovic arrived in Melbourne on a wave of public backlash as many Australians railed against the idea of a fit, wealthy athlete getting through the border’s narrow medical exemption requirements.

Then came the twist. Djokovic was stopped at the airport and interrogated about his exemption. Officials rejected the documents provided that said he had caught the virus again recently and had been granted a medical exemption from vaccination, and found the particular visa he had applied for did not allow such exemptions. No one received special treatment, said Prime Minister Scott Morrison, as the star’s visa was rescinded, “rules are rules”.

But didn’t he have an exemption?

Victorian minister Jaala Pulford confirmed that two independent panels by the state and Tennis Australia had approved his exemption to enter the tournament unvaccinated – they had reviewed 26 tennis-related applications without knowing names or countries of origin. But the government stressed that Border Force still decides who enters Australia.

“Novak isn’t coming to play the Australian Open because he’s the biggest tennis star of them all,” Ms Pulford said when Djokovic was en route to Australia. “He’s coming because he has been able to demonstrate through this process that he has an eligibility under the rules that apply to everybody else in the country. Lots of people in the Victorian community will find this to be a disappointing outcome, but the process is the process.”

The federal government has since released excerpts of letters to Tennis Australia stating that the exemption being relied on that seemed to appear in advice from Australia’s expert vaccine advisory panel ATAGI (of a recent COVID infection standing in place of vaccination) was not considered sufficient for international arrivals. On Friday, Acting Victorian Premier Jacinta Allan said Tennis Australia did not inform her government about that rule. It does not appear the tennis organisation told players either.

So, why was he granted a visa to begin with?

Tennis Australia and the Victorian government have questioned why the tennis star was issued a visa by the Commonwealth in November if they were only going to turn him back at the border. The federal government says this system is automated and proof of eligibility is still required on arrival. It is also unclear whether the prospect of Djokovic undertaking the 14 days’ quarantine period was ever discussed between Tennis Australia, the Commonwealth and Victoria, but the Open is due to start in less than 10 days, on January 17.

As the drama began to unfold at the airport on Wednesday night, Ms Pulford said the Commonwealth had asked the Victorian government if it would support Djokovic’s visa application, which she said it would not. Federal Immigration Minister Karen Andrews, meanwhile, has denied this request was made.

Hotel detention and a court injunction

Early on Thursday, Djokovic was moved to detention in the Park Hotel in Carlton, where dozens of asylum seekers have been held for years. As he awaits a court hearing on Monday that will determine whether he can stay in the country, his supporters and those against vaccine mandates have been rallying outside.

His family lashed the Prime Minister in a searing press conference back home in Serbia. His parents called Djokovic a “sacrificial lamb” held captive “in a dirty room” without contact with his family and compared him to Jesus. His brother Djordje described the detention as the “greatest sporting and diplomatic scandal”, saying “he had the same [exemption] document as several tennis players who are already in Australia. Novak and his team had no way of contacting federal authorities. The only way to make contact was via Tennis Australia, as they have a partner relationship with the authorities. Novak didn’t apply, Tennis Australia did.”

What has been the response from the Serbian government?

Serbia’s foreign secretary has hauled in Australia’s ambassador to the Balkan country to demand Djokovic be moved to a nicer hotel, and said there was a “strong sense in the Serbian public” that Djokovic had become the victim of political games and been baited to travel to Australia where he was later humiliated. Serbia’s President, Aleksandar Vucic, has also vowed to fight against Djokovic’s “harassment”, though Ms Andrews has stressed that the player is not captive – he is free to leave Australia any time.

How has this gone down in the tennis world?

While other tennis stars have expressed sympathy for Djokovic’s situation, many, including Nadal, have backed vaccination as the only path out of the pandemic, saying if you choose not to vaccinate, there will be problems. But Sandgren, a vocal critic of the quarantine measures at last year’s tournament, has argued that “Australia doesn’t deserve to host a grand slam” in a post supporting Djokovic. Even Kyrgios has said the way the Serb’s situation has been handled is “bad, really bad … he is human”.

To former Australian Open tournament director Paul McNamee, it “beggars belief” that Djokovic is the only participant so far to have his visa approved and then rejected. “All players go through the same visa process overseen by Tennis Australia to play the Australian Open [as non-Australians are not able to enter at present] … We need to remember one thing … even if you are angry, Novak Djokovic did not set the rules.”

Meanwhile,for the refugees watching the protests out the window, there’s hope that a little of the tennis champion’s spotlight now falling on the notorious immigration hotel will stay there.