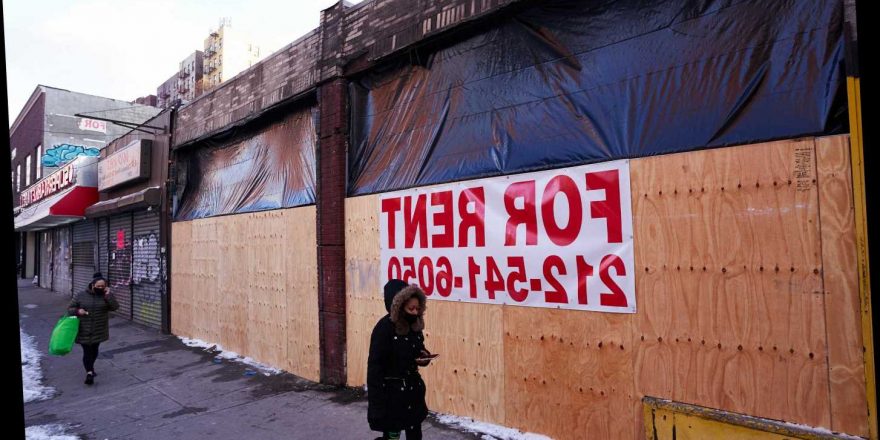 Despite bleak real-estate market, signs of hope are building

Like Tom Brady, NYC's wealthiest will leave the city and flourish elsewhere

Scared the rug will be pulled again, some top NYC restaurants aren't rushing to reopen

The ghost-storefront blight represents an existential threat to New York City’s future. Left unaddressed, it will crush the Big Apple’s normally indomitable spirit. Who wants to live or work where blocks of empty storefronts shout “failure” and provide sidewalk loitering grounds for drug dealers and vagrants?

Abandoned storefronts are ruinous to landlords, who must still make payments on mortgages, taxes and utilities. The loss of retail rent is disproportionately damaging because stores typically pay much more per square foot than do office and apartment tenants. The city’s entire lender-landlord-tenant balancing act is on the brink, and a new wave of retail failures could collapse it.

The crisis won’t fix itself. Our most urgent needs are to halt the government-driven creation of more brick-and-mortar shops at a time when consumers increasingly shop online, and to reduce the nation’s most unfair and destructive taxes on retail venues of every size and shape.

Oh, yes — let’s clean up the streets so people want to go out again.

The picture is worst in Manhattan. Residential areas aren’t in as bad shape as Midtown, but they’re inching toward free fall, as well. Count the ghosts on Broadway below West 86th Street. That was Brooks Brothers. That was Chinese-Cuban cafe La Caridad 78. That was — no one remembers because it’s been dark for so long. On the Upper East Side, Ann Taylor Loft and The Container Store, jumbos both, vanished overnight in the past week.

Our retail vitality depends on pedestrian traffic. But there are few office workers in Midtown, even fewer tourists in Times Square, and no NYU students in Greenwich Village. The flight to the Hamptons from upper Madison Avenue and Tribeca left merchants in those high-income areas without customers.

Our storefront lights were going out long before March 2020. Pundits unmoored from facts blamed property owners for keeping stores empty to get a “tax deduction.” Alas, no such tax deduction exists. Others claimed “the rent is too high.” But stores fell and remained empty for a tangle of reasons. Physical shops were disappearing from coast to coast as chains battered by e-commerce went belly up or were sold to cost-cutting private equity firms. Entire malls closed. Department stores including beloved Lord & Taylor fell like ten-pins.

Killer No. 1: Gotham has far too many store locations but not enough stores to fill them. The Real Estate Board of New York reported that the volume of retail space in the five boroughs grew by 20 percent between 2004 and 2017 — encouraged by zoning rules and mostly due to new construction that added millions of high-priced square feet to the market while people were turning in droves to e-commerce.

Zoning rules and city affordable-housing initiatives in many areas require new residential projects to include retail or provide size bonuses in exchange for it. Developers of all types of projects that require public review include store space whether or not there’s any demand for it.

For example, a proposed new complex on the Flushing waterfront, which requires a zoning change, would have a monumental 850,000 square feet of new retail space. And some developers who have yet to come to terms with new realities pile on more retail even when it isn’t required.

To those who say, “Well, who wants to live on the ground floor,” it isn’t a binary choice. What happened to the grand lobbies and entryways of the past? It doesn’t always have to be a store.

Online shopping’s share of retail spending climbed nationally from 4 percent to 10 percent from 2000 to 2019. It surely skyrocketed above that in the Big Apple when “nonessential” (i.e., most) stores were closed by government order last March.

The wipeout is about to get worse. The restaurant shutdown killed off thousands of eateries from taco joints to the ‘21’ Club. Of those still afloat, 90 percent failed to pay rent in December, the New York Hospitality Alliance reported.

Killer No. 2: City property taxes that landlords pass on to tenants. “Skyrocketing property taxes have risen 50 percent over the past seven years and can contribute to up to one-third of a retail tenant’s rent,” said Paimaan Lodhi, REBNY senior vice president of policy and planning. Yet Mayor de Blasio, who wants even higher taxes, has the temerity to criticize landlords for charging unaffordable rents.

There are also a separate, only-in-New-York “commercial real-estate tax” that milks tenants directly; regulatory overkill that soaks store owners with fines; and proliferating “sidewalk bridges” that scare off customers.

It might take years for things to return to normal. But shorter-term remedies can arrest the calamity for a time. Zoning rules should change to discourage large-scale creation of even more retail venues on top of the empty ones that exist. Besides reducing taxes, City Hall must torpedo an insane City Council pipe dream for commercial rent control, which would leave landlords even more desperate than they already are.

To draw shoppers back, the city needs to clean up the deteriorating urban environment. Get homeless off the street and into shelters, restore garbage collection to earlier levels and make subways safe again.

They are indispensable first steps toward preserving what remains of our retail landscape — and offering hope for its future.