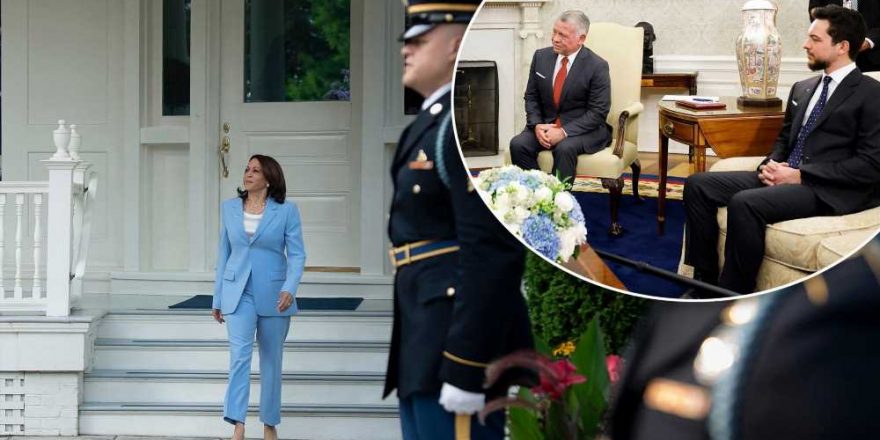 The 59-year-old king and his 27-year-old heir were greeted by Harris upon arriving at the Naval Observatory early Tuesday for their second major Biden administration meeting of the trip.

After their breakfast, the two royals met with Secretary of State Tony Blinken.

On Monday, King Abdullah was welcomed to the White House by President Biden, who was expected to make Iran a main focus, from rejoining the nuclear deal to addressing Tehran’s funding of militias attacking US troops in Iraq and Syria.

“Many of us leaders in our part of the world will do the heavy lifting, which is what we need to do on behalf of the United States, but you can always count on me, my country and many of our colleagues in the region,” the Jordanian king told the US commander-in-chief from the Oval Office.

For his part, Biden said Abdullah and Jordan had been a “good, loyal, decent friend” living in a “tough neighborhood,” referencing the Middle East.

Abdullah has taken issue with a number of recent US policies in the region. His relationship with President Donald Trump soured in 2017, when Trump opted to move the US Embassy in Israel from Tel Aviv to Jerusalem.

Biden has said that while he opposed that decision at the time, he has no plans to reverse the move. In fact, he has pledged to build on the work of his predecessor, repeatedly praising the diplomatic achievements that brought together the three countries.

Abdullah has long complained that he feels the Palestinians were kept away from the negotiating table when the deal was made.

A senior administration official said ahead of the meeting that the president planned to tell Abdullah in private that the accords are not an “end run” on reaching a peace deal that includes a Palestinian state.

For Harris, she and Abdullah had spoken before Tuesday.

The VP phoned Abdullah in late May to discuss US efforts to support a cease-fire in the Israel-Hamas conflict.

Harris said at the time that she had briefed him on “our intensive diplomatic efforts to support the path to a cease-fire in Gaza.”

Last week, a Jordanian state security court sentenced two former officials to 15 years in prison over an alleged plot against the king uncovered earlier this year that involved Abdullah’s half-brother.