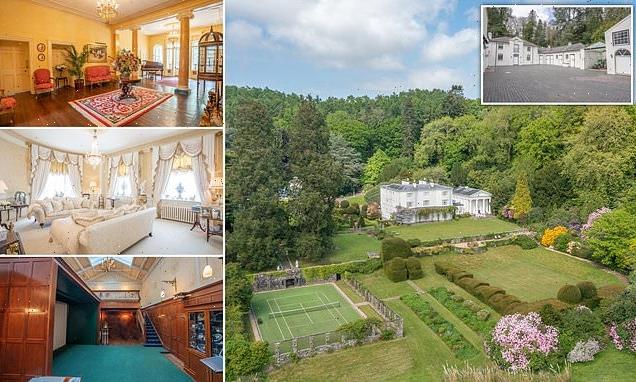 Georgian manor house with Greek-style temple on sale for £6.5million

Escape to the country! Eight bedroom Georgian manor house set in 75 acre of grounds with its own underground games room, tennis court and roaming PEACOCKS hits the market for £6.5million

A manor house in South Wales with a Neo-Grecian temple, an underground games room, 75 acres of peacock-dotted land and a tennis court has gone on the market for £6.5million.

The Georgian mansion of Glen Usk, in South Wales, contains eight bedrooms and six bathrooms as well as a drawing room, sitting room and tennis court.

In addition to the stone barn and water meadows, a 40-acre paddock can also be made available upon request.

The manor house was constructed in 1820 by Sir Digby Mackworth, the third Baronet of the Gnoll.

The property, situated in Glen Usk, has the River Usk flowing at its edge and overlooks the golf course that hosted the Ryder Cup in 2010, the Celtic Manor Resort. 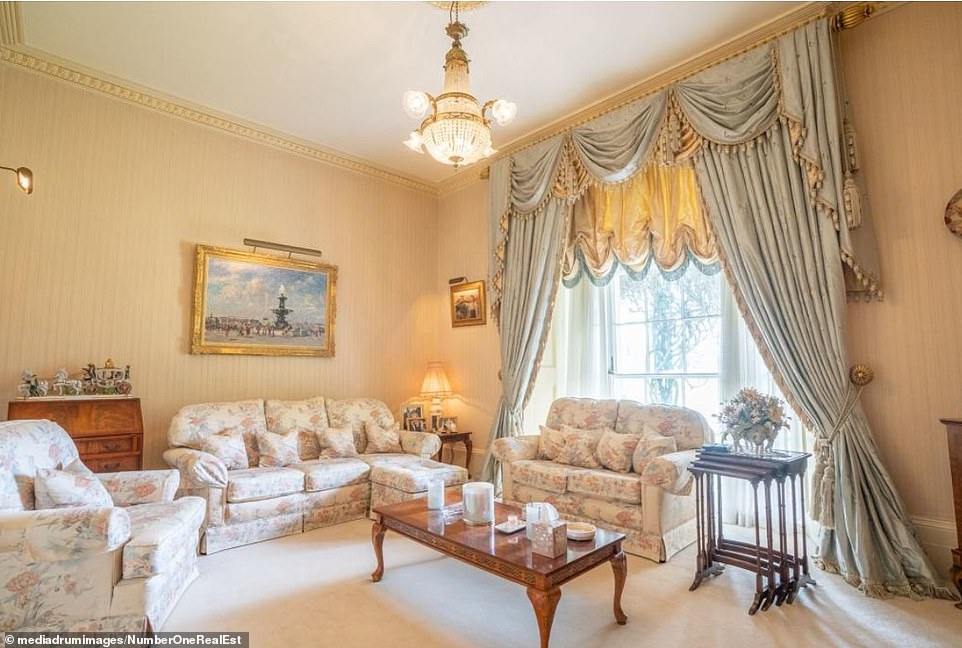 The Georgian mansion house in Glen Usk, South Wales, has a spacious and well-lit living room 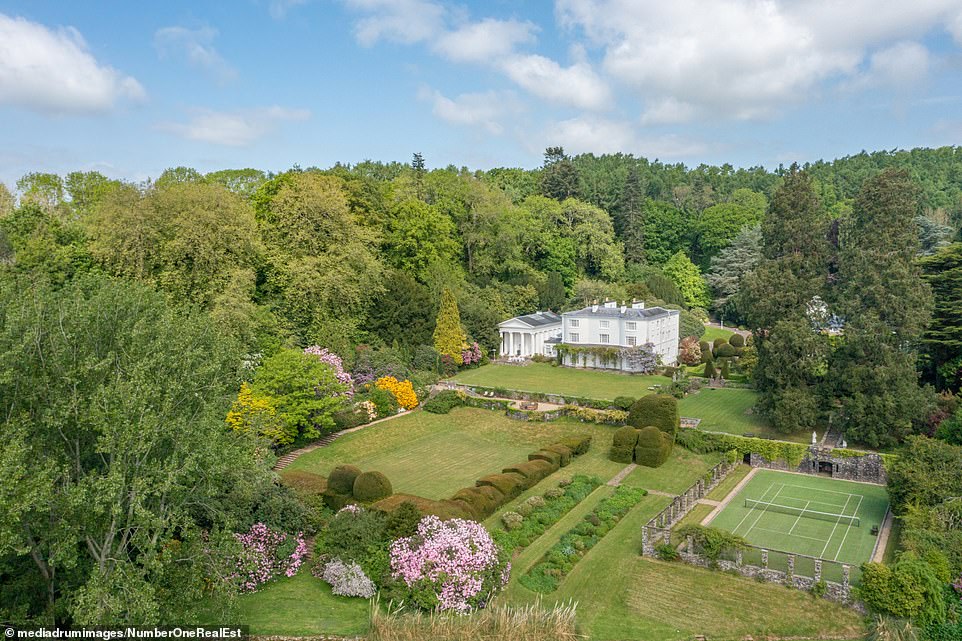 Bordered by tall trees, the house even boasts a tennis court in its grounds 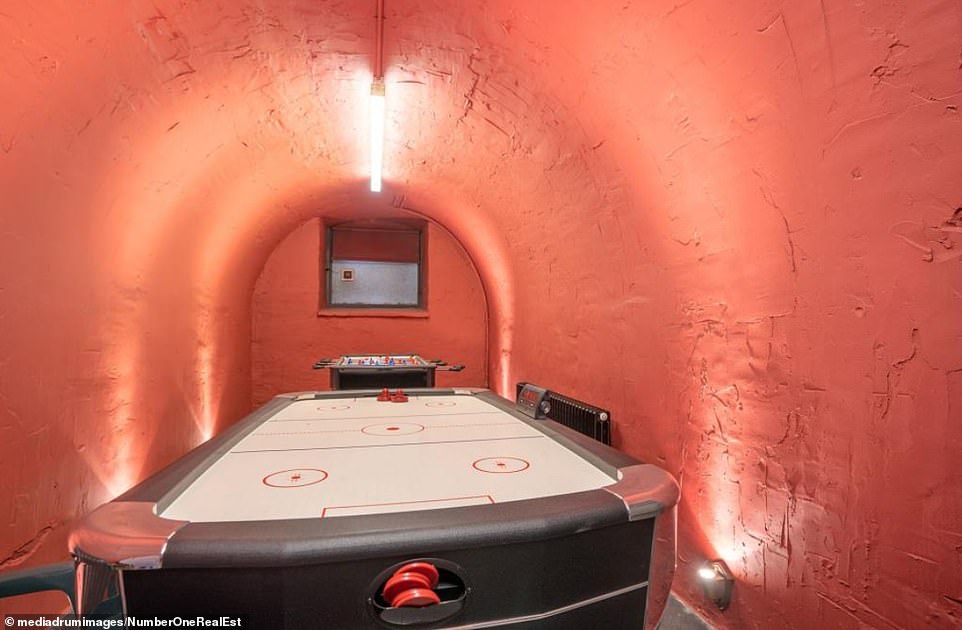 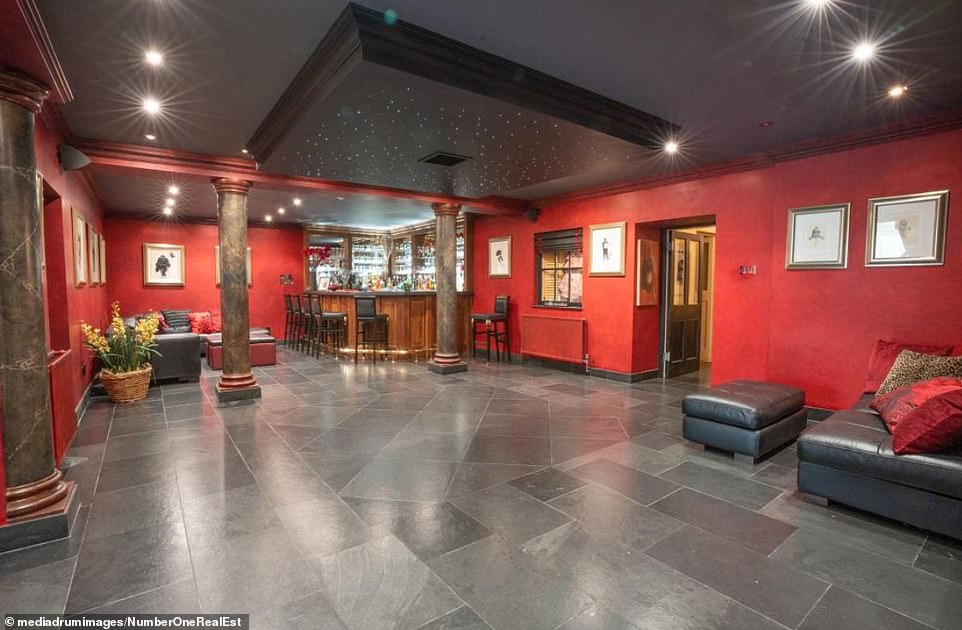 The house’s extensive basement also includes a bar, along with the games room and a number of cellars 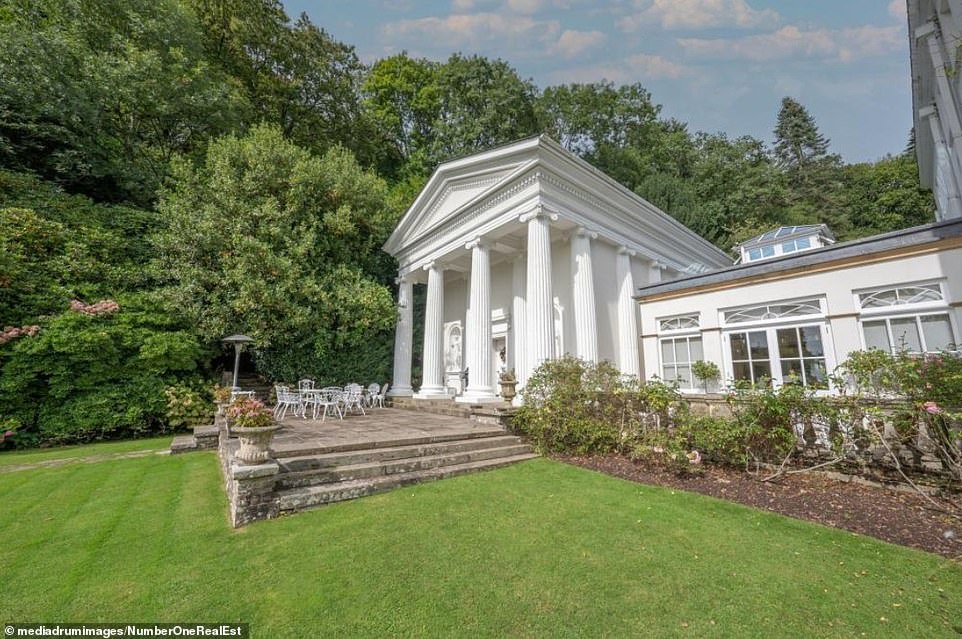 A Neo-Grecian temple (pictured) was added to the estate in 1990, bringing a taste of Ancient Greece to the Georgian estate 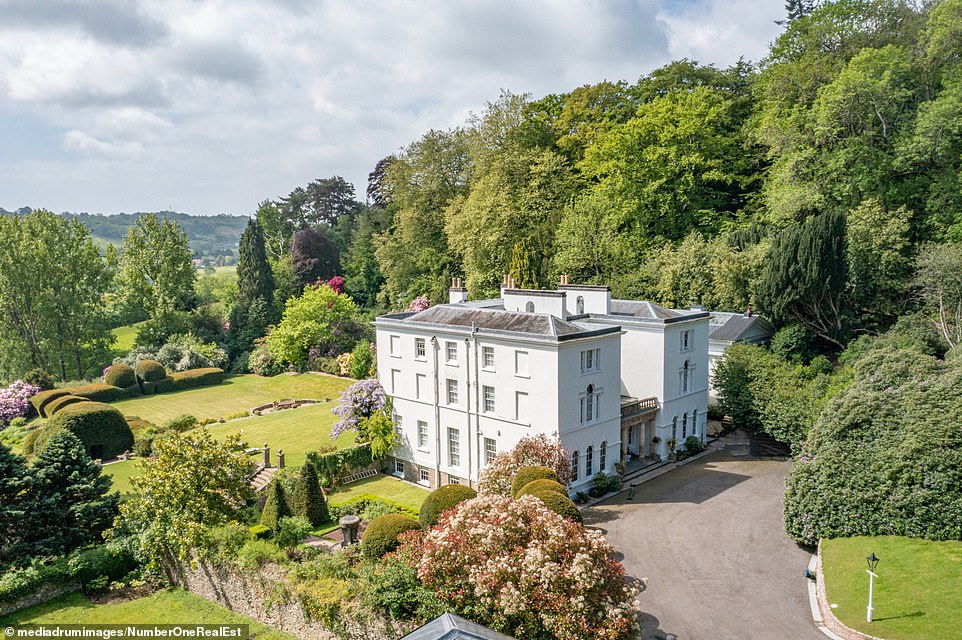 The property, built in 1820 by the third Baronet of the Gnoll, overlooks the golf course that played host to the 2010 Ryder Cup 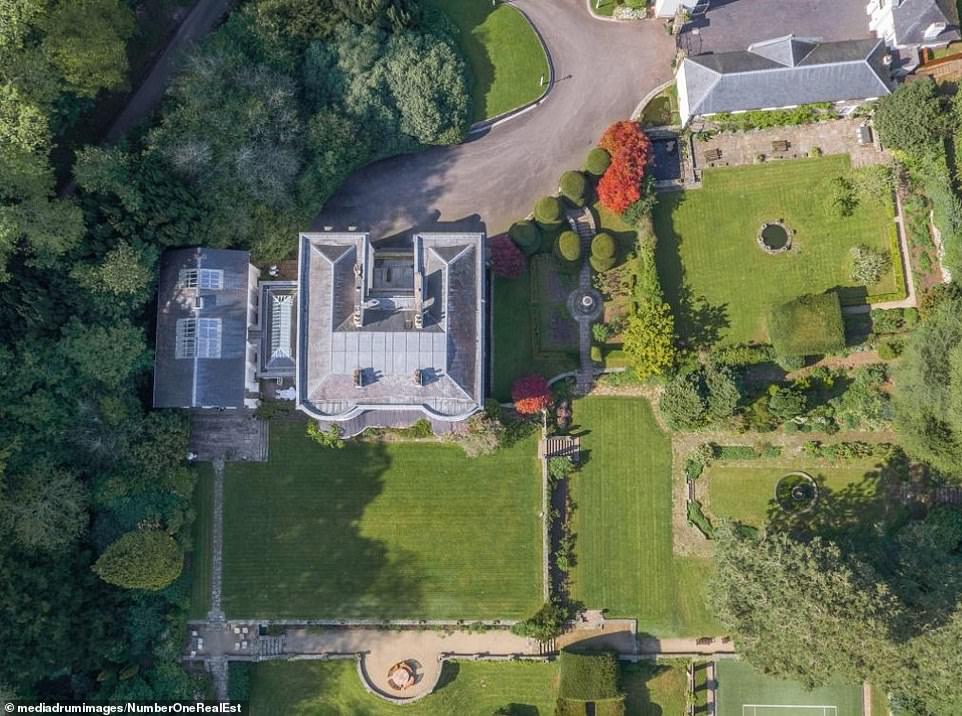 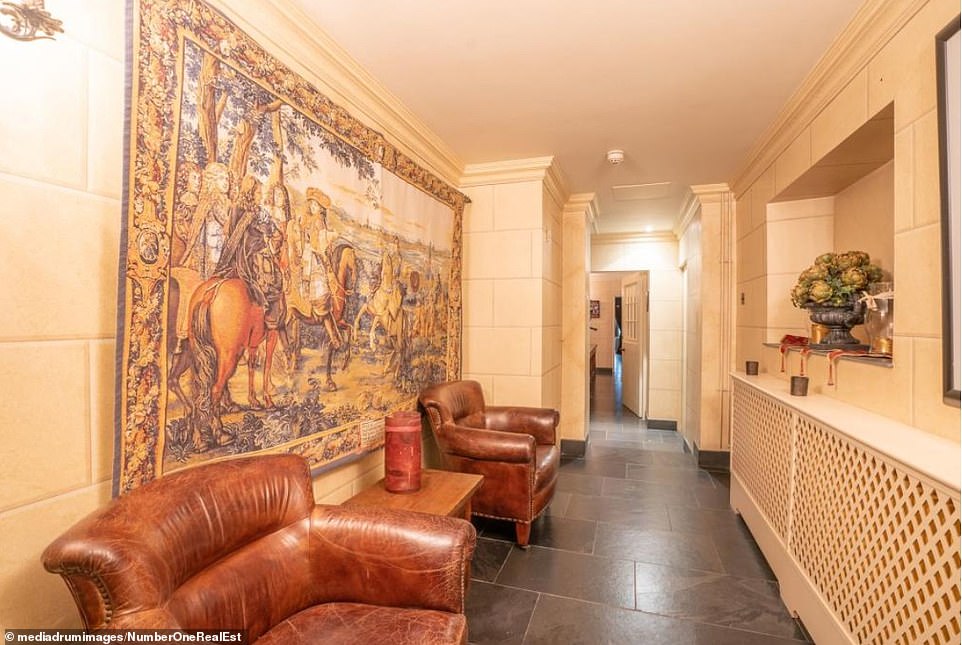 The house follows a Georgian architectural style, utilising scagliola columns throughout the design of the building.

On the property is a Grecian Temple, built in 1990, with panelled bookshelves and a minstrels’ gallery.

It has previously acted as a film set throughout the years due to its incredible design.

Like the manor house itself, the temple is also a Grade II Listed building.

‘Not only does this property capture the sweeping views of the river and the roaming country hills, views of the Ryder Cup Golf Course make the scenery even more captivating,’ reads the listing. 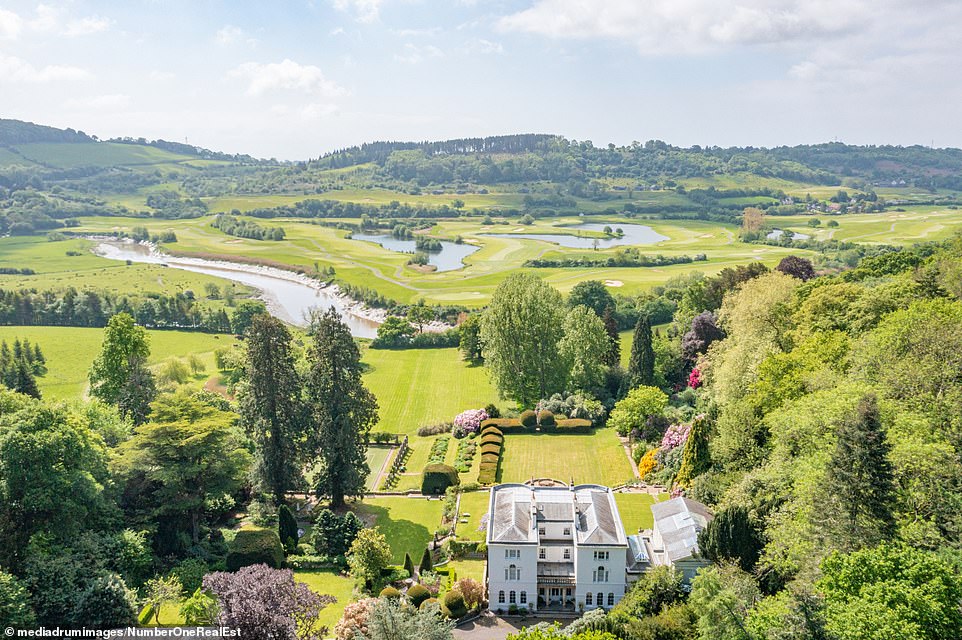 The River Usk laps at the periphery of the sprawling, 75 acre property which is home to a number of peacocks 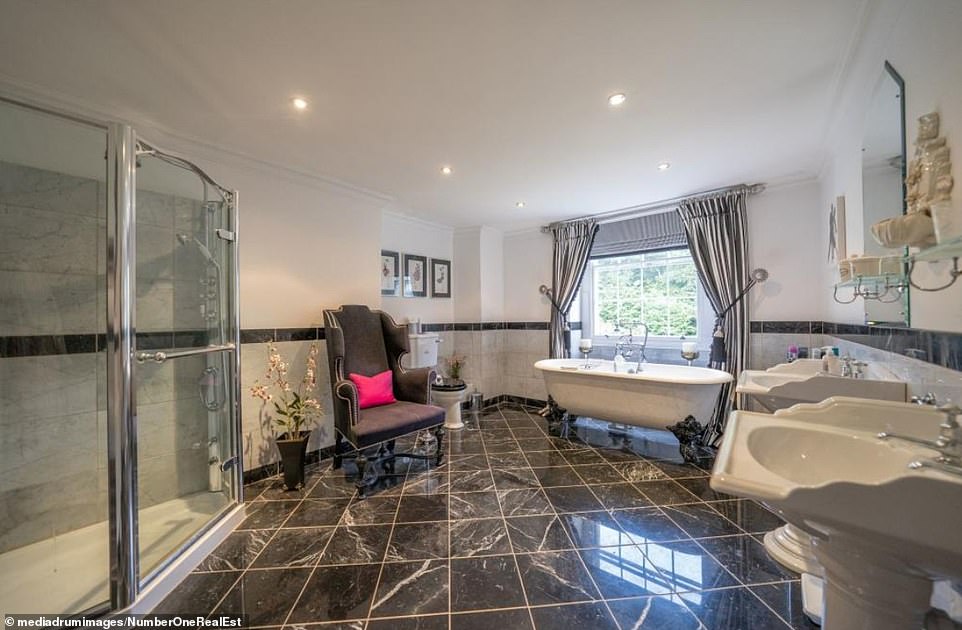 The property has six bathrooms, with the one pictured fitted with both a bath and a stand-up shower

‘The house has four floors including the extensive basement which houses the bar, billiard room and cellars.

‘Constructed in a symmetrical design with four storeys, the property is entered through a three-bay stone Tuscan Colonnade.’

This landed country estate is currently accepting offers, with a guide price of £6,500,000.