Home » From the Archives, 1986: Soviets call for help with Chernobyl disaster 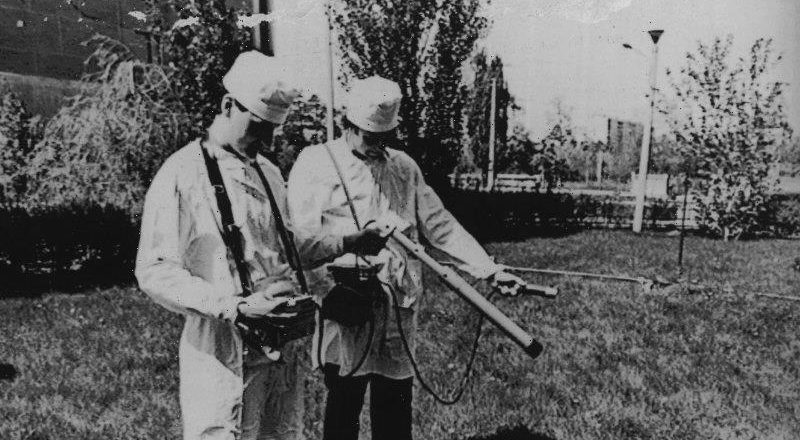 From the Archives, 1986: Soviets call for help with Chernobyl disaster

LONDON, 29 April. — Soviet officals have declared the accident at the Chernobyl nuclear power station in the Ukraine a “disaster” and have cleared an area within a radius of 30 kilometres around the site. 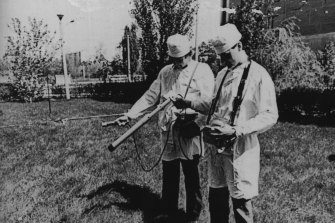 Soviet researchers measure radiation levels at the site on May 26, 1986.Credit:TASS

Tens of thousands of people are said to have been evacuated and there were unconfirmed reports of many deaths.

However, Tass news agency said that only two people had died.

The Soviet Union has asked the West for help in putting out the fire at the plant.

A Soviet diplomat also appeared at a centre run by West Germany’s atomic energy industry in Bonn, seeking urgent advice on how to fight a similar fire.

The nuclear power station accident, disclosed yesterday, is the most serious in the history of nuclear power generation, British experts believe.

The full extent of the accident is still unknown. Soviet authorities reverted to silence today after the surprise admission that a reactor at Chernobyl, in the Ukraine; was damaged, causing casualties. 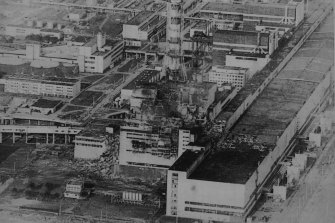 A view of Chernobyl Nuclear Power Station taken on May 9, 1986.Credit:TASS

But a Swedish official said after receiving the Soviet request for advice that it was clear the reactor’s core had melted “in part or even completely”.

The West German centre said it appeared from information given by the Soviet diplomat that a reactor had melted down and the blaze was out of control.

The Soviet Union at first denied that there had been trouble, but the news agency, Tass, later reported the accident after radiation levels six times higher than normal were reported over Scandinavia and 600 workers were evacuated from a Swedish power station.

The leakage has drifted more than 1600 kilometres over Finland, Sweden, Denmark and Norway, but experts say the only danger to health would be in the immediate area of the accident.

Scandinavian readings today showed a decline in radioactivity. The International Atomic Energy Agency in Vienna said it had been notified of the accident but given no details. It said it had no power to police reactors but could offer help in an emergency.

Even from the scanty evidence available it is believed that the accident, involving a 1000 megawatt reactor, is of major proportions. The BBC news service said it was almost certainly the worst in history. Mr Jim Harding, former adviser to the chairman of the Californian Energy Commission, said the leak made the Three Mile Island affair look like a tea party. 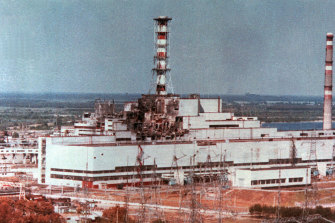 An aerial view of the Chernobyl nuclear power reactor shows damage from the explosion and fire.Credit:Tass

The US presidential Chief of Staff, Mr Donald Regan, on tour with Mr Reagan, is reported to have offered American help.

Ringhals nuclear power plant, Sweden, measured 100 times the normal amount of caesium 137, and high iodine counts were made in central Sweden. Radiation levels in some areas of Finland were reported to be 10 times higher than normal.

A British expert described the caesium level as alarming. Caesium has a half-life of more than 30 years and its presence would indicate high contamination in the area of the accident. Mr Peter Taylor, of the political ecology research group, said the release of caesium 137 would cause long-term, serious health damage.

There is speculation that a large-scale evacuation is being carried out from Chernobyl. Bus services in Kiev are reported to have been disrupted because buses have been commandeered for the emergency in Chernobyl, 130 kilometres north.

The BBC says the first reports of high radiation over Scandinavia came early on Sunday afternoon, indicating that the accident probably happened on Saturday morning.

A spokesman at the Danish nuclear laboratory at Riso said: “It is difficult to say exactly what happened. We are looking at something very close to a meltdown.”

A Swedish nuclear inspector said the accident appeared to have been caused by the overheating of nuclear fuel. A considerable explosion would have been the result and could have led to a meltdown of the nuclear core of the reactor.

Sweden first learned of the high radiation level when a worker at the Formark nuclear plant, about 90 kilometres north of Stockholm, set off an alarm while passing through a routine radiation check.

Six hundred workers were evacuated, but tests showed there had been no leak from the plant. Sweden asked Moscow for an extensive report, but the Soviet atomic energy authorities at first told the Swedish embassy in Moscow they were unaware of any nuclear accident that could cause a leak to reach Sweden.

The Swedish Energy Minister, Mrs Birgitta Dahl, said last night that Sweden was not satisfied with Soviet behavior. “They should have notified us immediately,” she said. “We must demand higher safety standards in the Soviet Union.”

Mrs Dahl urged that all Soviet reactors be placed under international control, although adding that there was no danger to people in Sweden from the present leak.

An Energy Ministry spokesman said that the rate of “a few millirems an hour” was not high enough to warrant the evacuation of Forsmark. A millirem has the same biological effect as one thousandth of a standard unit of X-ray. The British Radiological Protection Board said Britain would not be affected.

The Tass report of the accident said: “Measures are being taken to eliminate the consequences of the accident. Aid is being given to those affected.” A government inquiry had been set up, it added.

The report was mentioned on Soviet television last night but did not appear in newspapers this morning. It referred to similar accidents in other countries, claiming it was the first of its kind in the Soviet Union.

Mystery still surrounds a serious accident reported in the Urals in the late fifties when hundreds were thought to have died from radiation sickness after an explosion of buried nuclear waste.

America’s worst nuclear accident was in 1979 at Three Mile Island, Pennsylvania, when radioactive gas leaked after a partial meltdown of a reactor. About 144,000 people were evacuated.

The Soviet admission took Western diplomats by surprise. National disasters are seldom reported unless loss of life is large or foreigners are involved.