Home » World News » From the Archives, 1946: The first flight of Trans-Australia Airways

From the Archives, 1946: The first flight of Trans-Australia Airways

Sydney, Monday – Leaving Laverton at 5.45 this morning the Trans-Australian Airlines skyliner Hawdown carried a complement of 21 passengers and six bags of mail on the first flight of the interim service of the Australian National Airlines Commission. 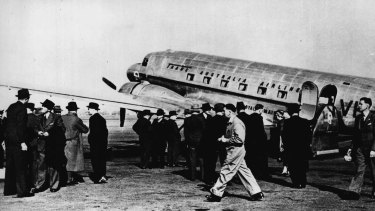 Arrival at Mascot of the first official TAA flight from Melbourne in 1946.Credit:Staff photographer

Among the passengers were the Minister for Civil Aviation (Mr Drakeford), the chairman (Mr A W Coles) and members of the commission, the deputy Director-General of Civil Aviation (Capt. E. E. Johnston) and executive officers of the Trans-Australia Airlines.

Those taking part in the historic flight were farewelled by a small group of officials in the bleak atmosphere of Laverton aerodrome half an hour before dawn. The Deputy Director of Post and Telegraphs (Mr Brown) handed over the mail bags.

The flight was made under ideal conditions at an altitude of 8000 feet and an average speed of 188 miles an hour.

Breakfast, consisting of scrambled eggs on toast, fruit and scones, was served while the passengers had a glorious view of the snow-covered alps ahead and the green rich pastures below.

At Mascot the official party aboard the Hawdon was welcomed by the Premier of New South Wales (Mr McKell) at 8.40 am.

At the official luncheon at the Hotel Australia to mark the first flight, the Minister for Civil Aviation (Mr Drakeford) said that the flight had been one of the best he had had on any service in the world. The commission had done a wonderful job in a short time. The act creating the commission had not been promulgated until April last.

He believed the time was not far distant when the people would post a letter in a capital city and have it delivered by air to any large town in Australia within 24 hours.

Civil Aviation was linked with defence of the Empire, he said, and Government control of airlines was now operating in the United Kingdom, South Africa, New Zealand and Canada.

This control must not be argued on party political lines. The proper approach to the question of whether the Government should be interested in airlines as a commercial proposition was in relation to its value to the nation as a whole. Australia would be neglecting its duty if it did not participate in the Empire network of nationally owned airlines.

In responding to the toast of the commission, the chairman (Mr Coles) said that he was rather proud of its achievements to date. The commission met first in February, but the general manager (Mr L. J. Brain) had not been able to resume his duties until June 3. In a month, a pilots’ school had been commenced at Point Cook, and between June and September 420 persons appointed to jobs.

By the end of the year, the commission would have a fleet of four Skymasters and 20 D.C.3.’s.

Referring to the future of the B.C.P.A Ltd. (British Commonwealth Pacific Airlines), Mr Coles said that it was expected to enter into an agreement whereby it would be possible to extend air services to the Philippines, and perhaps to other places.

The general manager (Mr L. J. Brain) said he looked on the work of Trans-Australia Airlines as a broad national duty.

They had decided to become “common carriers” and all that implied. The Airlines Commission had been unique in that it had started from scratch to create a new organisation, whereas in other parts of the world Government airlines had taken over organisations already in full swing.