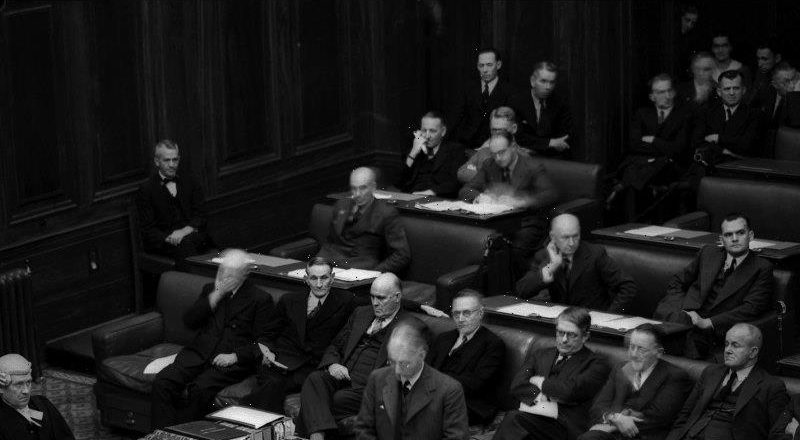 AUSTRALIA IN THE NEW WAR 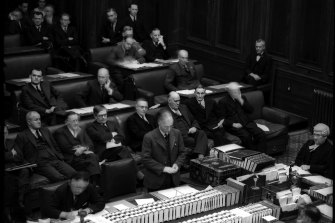 Australia’s share in the war against Japan, a conflict described last night by the Prime Minister, Mr Curtin, as “a new war, and not an incident in the general war,” is the culminating stage in preparations which have been made in Australia since Japan’s aggressive intentions became apparent.

Powerful land and air forces from Australia in Malaya, the disposition of ships of the Royal Australian Navy, the placing at war stations in the Commonwealth, its territories and the Netherlands East Indies of units of the Australian fighting forces, and the reorganisation of civilian life and industry on a full war basis are matters which are the immediate concern of the Federal Government, as a result of existence of a state of war between Australia and Japan.

All these aspects of the war were considered at meeting of the War Cabinet and of the full Cabinet in Melbourne yesterday, and they will be further discussed today at meetings of the War Cabinet, and on Tuesday of next week at a specially summoned meeting of Federal Parliament in Canberra. Many important decisions were made yesterday, several of which were announced by the Prime Minister.

Unity of the Democracies

The guilt for plunging the Pacific into actual warfare was upon Japan which “chose the Hitler method” of settling differences which every other country involved was willing to settle by negotiation and arbitration.

The indictment of Japan’s policy of ruthless aggression was expressed by the Prime Minister last night in a nationwide broadcast address.

Mr Curtin said war with Japan had happened because in the first instance, Japanese naval and air forces launch an unprovoked attack on British and United States territory; because our vital interests were imperilled and because the rights of free people in the whole Pacific were assailed. As a result, the Australian Government had taken the necessary steps which would mean that a state of war existed between Australia and Japan. Today, in common with the United Kingdom, the United States and the Netherlands East Indies Governments, the Australian Government would formally and solemnly declare the state of war it had striven so sincerely and strenuously to avoid.

When President Roosevelt decided to communicate direct to the Japanese Emperor a personal appeal for Imperial intervention on the side of peace, the war Government of Japan had struck. The war government, set on aggression and lusting for power in the same fashion as its Axis partners, anticipated the undoubted weight of the President’s plea and shattered the century-old friendship between the two countries. No other country but Japan desired war in the Pacific. The stern truth was that war had been forced upon us, not because of stubborn resistance on the part of the democracies to every demand that Japan made, but because Japan chose the method of armed might to settle differences.

Japan, by so doing, had chosen the Hitler method. While Japan’s diplomatic representatives were actually at the White House; while all the Democratic powers regarded the conversation as continuing, Japan had ignored the convention of a formal declaration of war, and struck like an assassin in the night. As the dawn broke, at places as far apart as Honolulu, Nauru, Ocean Island, Guam, Singapore and British Malaya, guns from Japanese war ships, bombs from Japanese aircraft, shots from Japanese forces, struck death to United States citizens and members of its defence forces, also to peaceful subjects of Great Britain and to her men on ships and on the land. These wanton killings would be followed by attacks on the Netherlands East Indies, on the Commonwealth of Australia, and on the Dominion of New Zealand, if Japan could get its way, Australia, therefore, being a nation which believed in a way of life which had freedom and liberty as its corner stones, went to the battle stations in defence of the free way of living.

The Prime Minister made an appeal to the Australian people. He urged them to give of their best in the service of the nation. There was a place and part for all of us, he said. Each must take his or her place in the service of the nation, for the nation itself was in peril. This was our darkest hour. Let that be fully realised. Our efforts in the past two years must be as nothing compared with the efforts we must now put forward. His appeal was in the name of Australia, for Australia was the stake in this conflict. The thread of peace had snapped – only the valour of our fighting forces, backed by the very uttermost of which we are capable in factory and workshop, could knit that thread again into security. Let there be no idle hands. The road of service was ahead. Let all tread it firmly and victoriously.