France publicly threatened to veto a ‘bad’ Brexit deal today as negotiations teeter on the brink of collapse.

Paris has emerged as the major obstacle to a pact amid warning that just 48 hours are left to break the bitter deadlock over fishing rights and level playing field rules.

UK negotiators had believed they were close yesterday, but claim they were hit with a series of new demands from Michel Barnier.

The EU envoy had been read the riot act by France over compromising in a meeting with ambassadors earlier in the week.

And European Affairs minister Clement Beaune told Europe 1 radio this morning: ‘I want to tell our fishermen, our producers, the citizens who are listening that we will not accept a deal with bad terms. 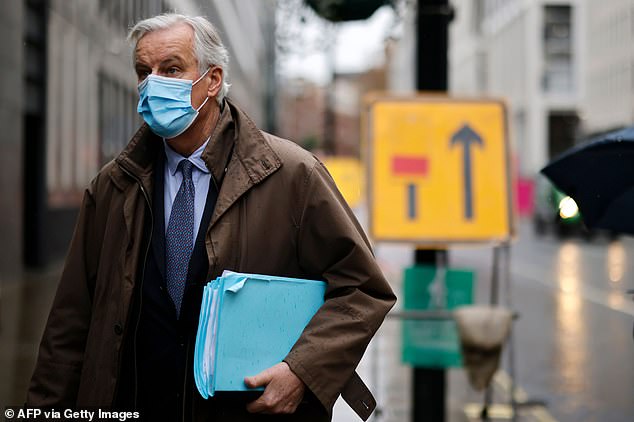 UK negotiators had believed they were close yesterday, but claim they were hit with a series of new demands from Michel Barnier (pictured) 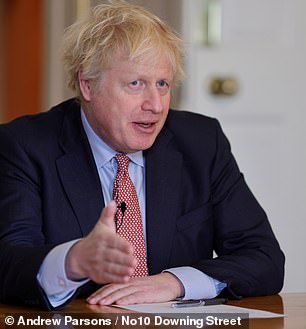 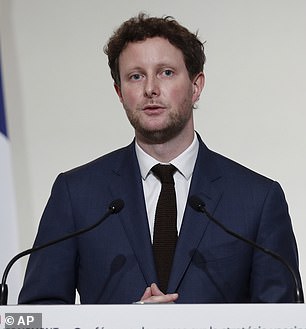 European Affairs minister Clement Beaune (right) told Europe 1 radio this morning that France ‘will not acept a deal with bad terms’. Boris Johnson (left) is expected to have a call with the EU commission president Ursula von der Leyen

‘If a good agreement cannot be reached, we will oppose it. Each country has a veto right, so it is possible … We will do our own evaluation of this draft deal, if there is one.’

Meanwhile, European Council president Charles Michel told an event in Brussels that the UK had ‘choices to make’.

UK officials claim the French are putting pressure on Mr Barnier because of concerns in Paris that UK businesses will use Brexit to undercut competitors on the continent.

‘At the 11th hour, the EU is bringing new elements into the negotiation,’ said one source.

‘A breakthrough is still possible but that prospect is receding.’

France is also pushing hard on fishing, with President Emmanuel Macron facing huge political damage if he does not protect the country’s fleets.

Negotiators have been talking late into the night all week and are discussing the possibility of pausing today before resuming again tomorrow.

There are rumours that Boris Johnson and EU commission chief Ursula von der Leyen will have a call in a desperate effort to find a way through the impasse.

Officials have compared the windowless basement rooms in Whitehall where the negotiations have been taking place to a jail. One source said they believed ‘day release’ could be beneficial for both sides.

Business Secretary Alok Sharma said this morning that the talks were at a ‘difficult’ phase with ‘a number of tricky issues’ still outstanding.

He told BBC Breakfast: ‘We are committed to reaching an agreement with the EU on this particular discussion that we are having.

‘But, of course, time is short and we are in a difficult phase. There’s no denying that. There are a number of tricky issues that still have to be resolved.

‘The fundamental point – I want to make this really very, very clear to your viewers – is that we have said all along, right from the start of these negotiations, and I’ve come on your programme, other programmes, as have other ministers over the past months, and said that we want the EU to recognise that the UK is a sovereign and independent nation.

‘It is on the basis of that that a deal will be done.

‘It is tricky, but we are working hard. David Frost and his team are working incredibly hard on this, in good faith, so let’s see where we get to.’

Ireland’s foreign minister Simon Coveney yesterday said he believed there was still a ‘good chance’ an agreement could be reached.

‘It’s the time to hold our nerve, to trust Michel Barnier, who has done a phenomenal job to date,’ he said.

‘I believe, if we do that, there’s a good chance that we can get a deal across the line in the next few days.’

Businesses are becoming increasingly frustrated with the uncertainty around trading arrangements once the UK leaves the single market and customs union at the end of the year. Tesco chief executive Ken Murphy told Sky News the supermarket chain was preparing for No Deal.

‘We have been doing everything in our power to make sure that we are well placed to continue trading, to continue to supply our customers regardless of whether there is or isn’t a No Deal Brexit,’ he said.

‘That’s the one area where we really would urge the Government to give us some clarity and to allow us to prepare event better for the end of December.’

Mr Johnson tried to ratchet up the pressure yesterday by threatening to bring back controversial legislation before MPs.

Commons Leader Jacob Rees-Mogg said the UK Internal Market Bill will return on Monday after peers removed clauses that give ministers the power to renege on parts of the EU Withdrawal Agreement. The Government is likely to back down on the issue if a deal is reached.

Last month the House of Lords inflicted on the Government the largest defeat in more than two decades over the legislation.

Tory grandees including Michael Howard and Ken Clarke joined the revolt as peers voted by 433 to 165 to strip out key clauses.

Mr Rees-Mogg told MPs yesterday: ‘We will be doing the Lords amendments on Monday and we will be pushing back all the amendments which were made in the Lords – including the ones relating to Clause 5 and ensuring that we can put the best interests of the whole United Kingdom first.’

Labour leader Sir Keir Starmer confirmed that his party was likely to back an EU trade deal in any Commons vote.

During a visit to Portsmouth, he said: ‘As soon as there’s a deal we’ll look at it, but if the choice is a deal or No Deal, then a deal is obviously in the national interest.’