A man accused of stomping on the head of a rival after a fatal shooting outside a Melbourne boxing event is back in custody after he allegedly breached his bail curfew in St Kilda last week.

Ali El Nasher has been charged with attempted murder over allegations he stomped on a man who had suffered three gunshot wounds outside the Melbourne Pavilion in Kensington on March 1 last year. 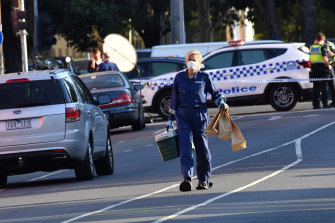 Police at the scene of the fatal shooting outside the Melbourne Pavilion in Kensington in March last year.Credit:Joe Armao

Mr Togiai, a father from Craigieburn, died and his companions were wounded. 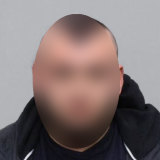 Abdullah El Nasher and Mr Allouche have been charged with murder, and Mr Myko and Ali El Nasher with attempted murder.

Police allege Mr Myko shot Mr Abouchaya, and that while the injured man was on the ground, Ali El Nasher stomped three times on the man's head.

The shootings came after the two groups allegedly exchanged insults inside the venue and tensions escalated between them.

Ali El Nasher was at large for five months after the shooting, before he surrendered himself on July 23 last year and was charged.

However, he was granted bail in the Court of Appeal in June on a $400,000 surety after three judges ruled that the prosecution case was weak, a trial would probably be delayed because of the pandemic, and conditions behind bars were "onerous".

In the Melbourne Magistrates Court on Tuesday afternoon, police made an application to have Ali El Nasher's bail revoked after police executed a search warrant at his home on Monday night and arrested him.

He was charged with breaching his bail conditions and for refusing to give police the PINs to unlock two phones.

Police believe he was involved in a brawl at St Kilda Marina on November 2 about 9.20pm, which was in breach of the 8pm to 7am curfew imposed as part of his bail conditions.

Police have not charged Ali El Nasher in relation to the affray and say they have not ruled out the possibility he was a victim in the incident.

Detective Senior Constable Brendan Humby, of the Echo Taskforce, said police had been called to reports that a group of men were punching and kicking each other near the boat ramp.

When one of the officers arrived, he found Ali El Nasher sitting in the passenger seat of a car with blood on his arm.

Ali El Nasher told police he had not been assaulted, he knew nothing about a fight and didn't wish to make a complaint.

The next day police made inquiries with the Royal Melbourne Hospital, where staff confirmed he had been admitted the night before with injuries to his face and a large cut on the top of his head.

Detective Senior Constable Humby said an investigation into the fight was ongoing and police were unclear what started it.

On Tuesday evening, investigators executed a search warrant at Ali El Nasher's house and found him with two black eyes and a swollen face. He told police the injuries were related to a car accident, but couldn't say where or when the crash took place.

They also found two phones, for which he refused to provide police with the PINs.

The court heard Mr El Nasher was pulled over on July 21 driving a Mercedes while unlicensed.

On August 10 this year, the gang crime squad conducted a search of his home under firearms prohibitions legislation following a large number of shootings in Melbourne's suburbs, which police believed were linked to organised crime.

Police found a "knuckleduster and Taser device" inside an Armani box under a bed in Ali El Nasher's home. He denied knowledge of it.

The court heard on Tuesday that medical records obtained by police show the man he is accused of stomping on, Mr Abouchaya, suffered injuries to his eye socket, chin, jaw, temple and cheekbone, and he was shot in the abdomen, cheek and right leg.

He required emergency surgery and could have digestive and mobility problems in the future.

The three Court of Appeal judges who granted Ali El Nasher bail in June said the case for attempted murder was "non-existent".

The application to revoke bail, before magistrate Michelle Hodgson, will continue on Wednesday afternoon.