Ethiopian national will be deported after jail term for sex assault

Footage shot by brave bystander shows ‘dangerous’ sexual predator, 29, just seconds after he violently smacked two random women on the bottom and punched them in the face

A ‘dangerous’ sexual predator has been jailed for 32 months after a witness tracked him down a month after he targeted two lone women in the street.

Once his sentence has been served Mentesnot Cheru is to be deported to his native Ethiopia.

Cheru, 29, from Tottenham carried out the violent sex attacks on random victims, who were in their 20s, minutes apart on the morning of April 4 in Tottenham, north London, the court heard.

Joshua Donka, 20, who was passing in his car, filmed Cheru, who was holding a tennis racquet as he fled following the first assault.

The footage shows the attacker – wearing a red baseball cap, jeans and white trainers, and carrying a black leather rucksack – being knocked to the ground before escaping.

A month later, on May 3, Mr Donka spotted Cheru before following him to his home and calling police. 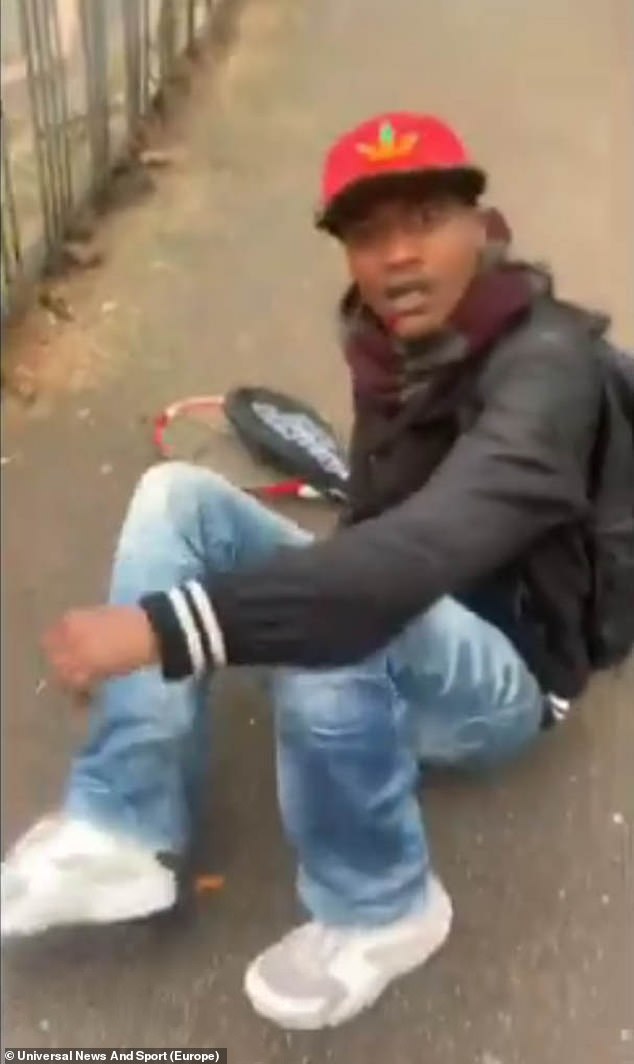 Joshua Donka, 20, filmed Cheru, (pictured above) on his mobile phone as he fled from the first assault on the morning of April 4 in Tottenham, north London

Officers arrested Cheru, of Winchelsea Road, Tottenham, and found the clothes he was wearing on the day he carried out the attacks.

He pleaded guilty to two counts of sexual assault and a charge of possessing cannabis at an earlier hearing.

Sentencing him to two years and eight months imprisonment, with an extra three years on extended licence, Judge Gregory Perrins told him: ‘You are plainly and simply a dangerous man.’

Cheru must serve at least two-thirds of his sentence and will only be released when the Parole Board says it is safe to do so. 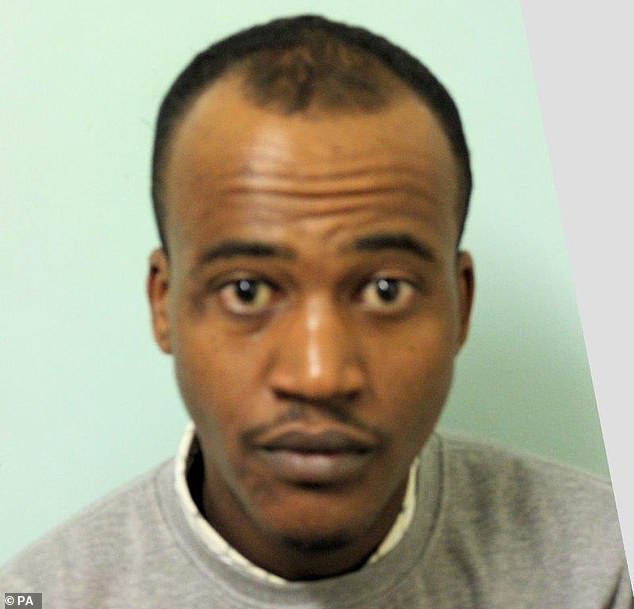 Mentesnot Cheru, 29, was jailed for 32 months after a witness tracked him down a month after he targeted two lone women in the street

After his sentence is completed he will be deported to Ethiopia, where he claims he is from, the court heard.

‘He wishes to be deported so that he can go home and see his family,’ said Joanna Staples, defending.

Cheru was twice warned to be quiet during his sentencing hearing today.

‘They both involved random attacks on lone women,’ he said. ‘You deliberately targeted them and saw them as vulnerable women walking alone in the street.’ 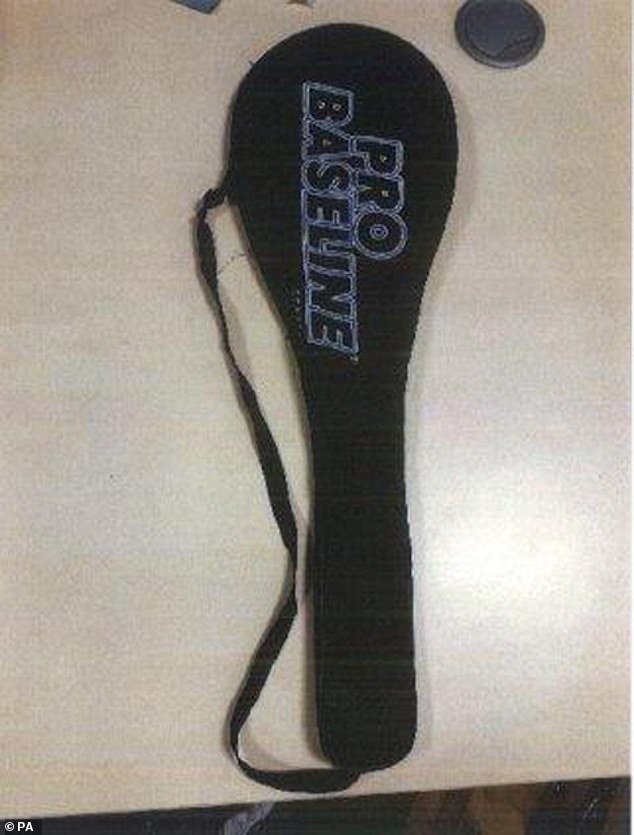 Tennis racquet cover found in the search at the home of Cheru Mentesnot. Cheru, was holding a tennis racquet as he fled following the first assault. He was sentenced at Wood Green Crown Court in London after he admitted to two counts of sexual assault (photo issued by the Metropolitan Police)

Wood Green Crown Court heard that his first victim, 20, was on her way to work at around 10.20am when she was attacked by Cheru, who touched her bottom and private parts.

He then called her a ‘f****** bitch’ and punched her five times in the face and shoulder, leaving the woman ‘shocked and traumatised’, with a swollen eye requiring hospital treatment, the court heard.

She said in a victim impact statement: ‘I was attacked for no reason. When the attack first happened, I was totally shocked. I couldn’t believe someone had attacked me for no reason.’

Minutes later another woman, 27, was attacked by Cheru in a nearby street. 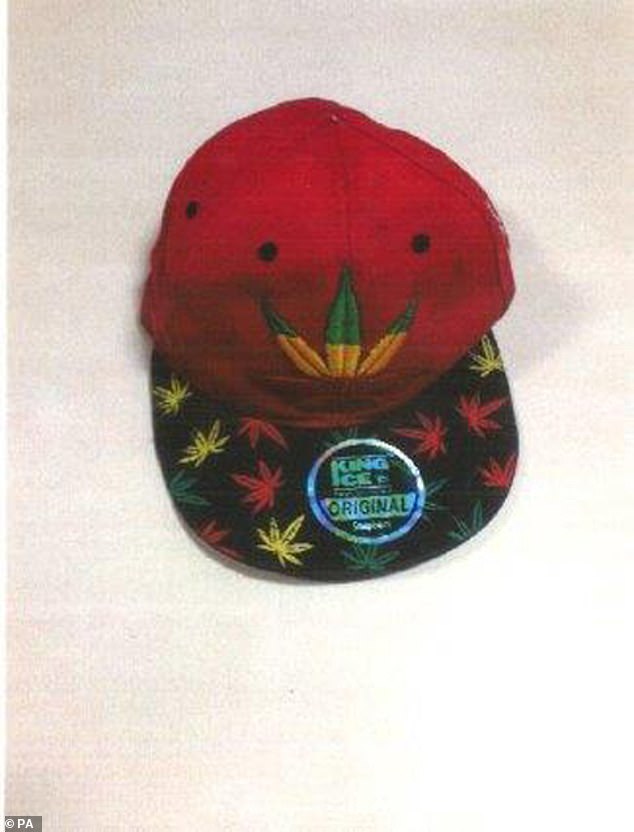 ‘I was suddenly slapped hard on my bottom from behind and it was really hard. I immediately turned around to see who had done that to me. He then punched me to the face once,’ she told police.

‘I was in shock because I was totally not expecting this to happen.’

The court heard Mr Donka chased Cheru after the first attack but he escaped. 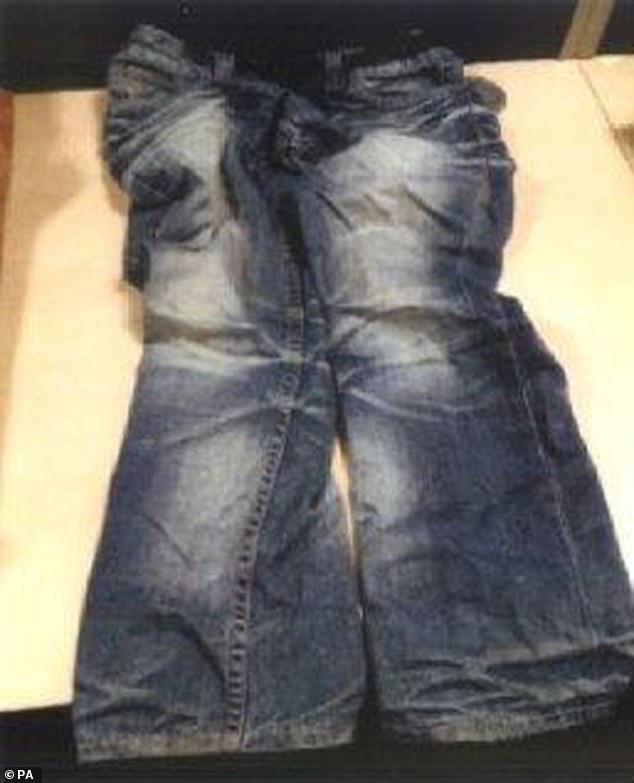 Pair of jeans found during the search of the home of Cheru Mentesnot. The court head how after his sentence is completed Cheru will be deported to Ethiopia

‘On May 3 he (Mr Donka) did see the male and was quite sure he was the same male,’ said prosecutor Sherry Nabijou.

‘He then followed him and managed to get an address.’

Cheru has a string of previous convictions, including a seven-year jail sentence in 2010 for stabbing a police officer in the back in Croydon.

While serving his sentence, he attacked a prison guard, before being convicted for exposing himself to a toilet cleaner two days after his release in 2016.