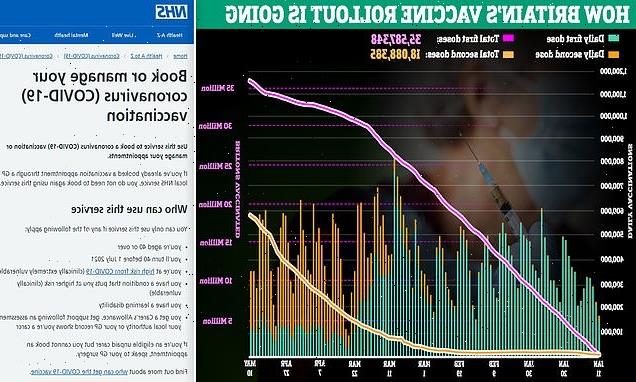 England's Covid vaccine drive will open up to under-40s TOMORROW

The coronavirus vaccine programme in England will open up to people under the age of 40 for the first time tomorrow.

An NHS Digital bulletin showed those aged 38 and 39 will be invited to come forward for their jab from Thursday morning.

They will be offered either the Pfizer or Moderna vaccine on the back of new guidance from medical regulators last week.

The Joint Committee on Vaccination and Immunisation said under-40s should be given an alternative to the AstraZeneca jab due to its link to rare blood clots.

The NHS Digital bulletin said 38 and 39-year-olds already booked in for a first dose of the British vaccine will have their appointment cancelled.

People who qualify for a jab will invited via a text from ‘NHSvaccine’, which includes a web link to the health service’s online booking service.

Those who can’t access the internet can call 119 instead to get an appointment at one of 1,600 sites administering the vaccines across England.

So far more than a quarter of the entire UK population – 18.1million – has been fully vaccinated against Covid and more than half – 35m – have received the first dose. 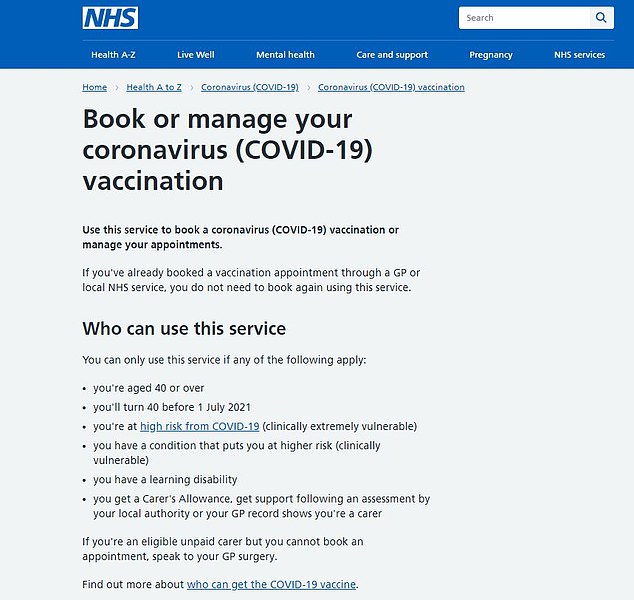 The coronavirus vaccine programme in England will expand under-40s for the first time tomorrow. Currently the national booking service shows the scheme is only open people over 40 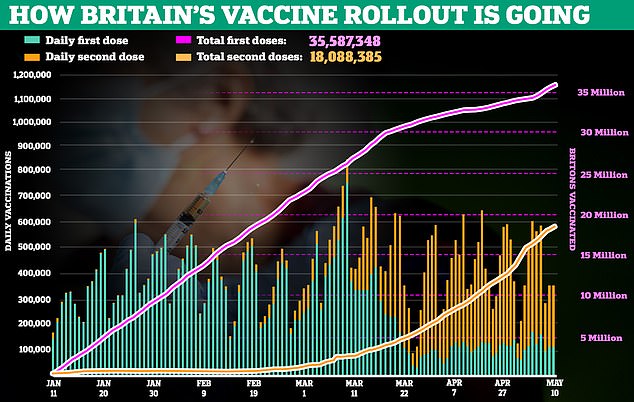 So far more than a quarter of the entire UK population – 18.1million – has been fully vaccinated against Covid and more than half – 35m – have received the first dose

The vaccine rollout is currently in phase two – which includes people between 20 to 49 – and is moving down by age. The Government says it is on track to fully vaccinate every adults in Britain by the end of July.

Everyone in phase one of the programme, which included elderly people and patients with underlying health conditions, have already been offered a vaccine.

Spain will not demand any British holidaymaker presents a covid passport or proof of a negative test on arrival from May 20, it was revealed today.

But with no sign of the UK adding the country to its ‘green list’ of destinations, travellers will still have to self-isolate for ten days when they get home and at least two PCR tests.

British holidaymakers will be able to freely enter the country from next week as long as the UK’s Covid infection rate remains below 50 cases per 100,000 people. It is currently at 21.3.

Spain will remain on Britain’s ‘amber list’ of destinations until at least June 7, when the Government carries out its next review, but experts are predicting it may not go green until the end of June at the earliest.

That means that any Briton heading there before then has to quarantine for 10 days at home on return and take two PCR tests on days two and eight of their self-isolation.

It came as Greece said it was confident it would go green on June 7, with tourism minister Haris Theoharis saying they were ‘disappointed’ not to be on the list with Portugal from Monday, May 17.

Green list status means Britons returning from those 12 countries don’t have to quarantine but must have a negative lateral flow test in the 72 hours before they return home and a PCR test on day 2 after they get back.

Confirming free entry into Spain, tourism minister Reyes Maroto said: ‘It will allow the opening of the British market so they can come to Spain. They (Britons) could come from May 20 onwards without a PCR if the incidence rates are below the range currently under review, which is around 50 cases per 100,000 people.’

Uptake is thought to be around 90 per cent in the over-60s UK-wide, while coverage in the over-50s is above 50 per cent and still climbing. Over-50s only started to be invited last month.

The bulk of vaccines given out in Britain so far have been AstraZeneca, which was being produced domestically and is easier to store than the American jabs, which need to be kept at extremely low temperatures and transported using special equipment.

But as the rollout progresses tomorrow officials have been told to turn to the Pfizer and Moderna shots.

The JCVI – which advises the Government on how best to vaccinate the population – said younger people are not to be given the UK jab because of its link to blood clots.

So far regulators have spotted major blood clots in 242 people given the AstraZeneca vaccine, of whom 49 died. But they are occurring more in younger adults, with a rate of around one in 60,000 under-40s.

Experts said the infection rate in the UK is now so low that the risk of the rare clots outweigh that of Covid in younger adults, who often only suffer mild illness.

They will be offered the Pfizer or Moderna vaccines instead, so long as there is enough supply and it won’t delay the rollout.

Anyone, no matter what age, who has been given their first dose of the AstraZeneca jab and didn’t suffer the complication is being urged to come forward for their second.

On Tuesday night, America’s regulator, the Food and Drug Administration (FDA), approved plans for the Pfizer jab to be given to children aged 12 and above.

No10 has reportedly already drawn up plans to vaccinate secondary school-aged children with Pfizer’s two-dose jab from September.

But experts are divided on whether Britain should press ahead with the policy, given that youngsters are at such tiny risk of Covid.

Professor Anthony Brookes, professor of genetics and genome biology at the University of Leicester, told MailOnline: ‘We should be worried about the completely unknown and unknowable long-term risks of vaccination of the young.’

And professor David Livermore, a medical microbiologist at the University of East Anglia, said he expects vaccines to be approved for children in the UK but warned it poses an ethical dilemma.

He said: ‘Children gain very little from the vaccination but may run some small hazard to harm.’

Giving children coronavirus vaccines is morally complicated, and UK health chiefs have already said it would only be done if it was deemed necessary.

Advocates of the move argue it would help protect older people by allowing Britain to move one step closer to ‘herd immunity’, curbing the spread of the virus.

They also warn that while the immediate harms of Covid seem small to children, the dangers of ‘long Covid’ on them are still somewhat unknown.

But critics say offering jabs to children would be unethical because it would only be done to protect older people — not youngsters themselves.

Just 57 people under the age of 20 in England have died with Covid since March 2 last year, but teenagers are thought to be just as likely to spread the virus as adults.