As Melbourne starts to talk about repurposing vacant offices and shops for affordable housing and arts spaces, I want to sound a note of caution on the inevitable dredging up of the concept of temporary use.

Temporary use is a practice that originated in Berlin after the fall of the Wall, when large tracts of land were in uncertain ownership and building vacancy rates rose quickly as the city went bankrupt.

Land and structures were occupied by punks, activists, anarchists, students and artists for housing, live-work spaces and clubs. While "temporary", they were unlimited as well as informal, and perhaps illegal. Their users certainly did not pay rent. 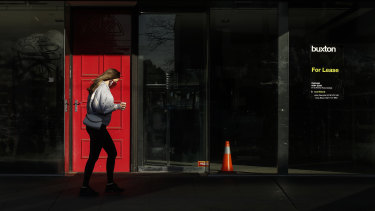 A woman walks past an empty shop on Chapel Street in Prahran. Credit:Daniel Pockett/Getty Images

As the concept spread to other European cities, "interim" or "meanwhile" uses emerged: more formal occupations of city space, usually while development approval was being sought and permits issued. Usually no rent was paid here either, but the occupants would sign an agreement that required them to vacate when it suited the owner.

Even this was regarded by temporary users as a corruption of the original concept, which was about taking control of space and showing how alternative land uses could engage people and enliven the 'hood, free of exchange and financialisation.

In Australia, temporary use has somehow distorted into "area activation", where users are not only recruited into a strategy explicitly intended to raise property values – which will mean they are evicted if the place can be profitably relet – but are asked to pay for the privilege.

The marketing of the temporary "pop-up" use as some edgy urban hack completely evacuates the concept of its political intent – no self-respecting punk would be caught dead entering into a lease agreement that requires them to pay rent for a temporary use and commits them to leaving at the owner’s whim.

More important are the implications of the commodification of temporary use for live-work spaces. While such uses in Europe generally have no time limit – meaning there is always the prospect of being moved on – controls on evictions mean they can continue for years.

The vast majority of cultural and social enterprises need stability for planning and production. For any kind of housing, security of tenure is fundamental to maintaining social relationships, proper healthcare and an ongoing income.

Before ideas of turning empty offices into temporary housing and shops into short-term arts spaces gain too much traction, we should look at how these might be made suitably long-term for their prospective inhabitants. There needs to be a way of ensuring secure, affordable rental contracts with building owners, which will require mediation and probably subsidies from local authorities, if not outright purchase.

There are still too many state and locally managed public buildings sitting empty. A key element to releasing and repurposing vacant buildings or parts of buildings is to get the planning and building controls right. This is a state responsibility. Changes of use from office to residential, shop to studio, or warehouse to music venue need to be facilitated in planning schemes. Building regulations have to be tailored to relieve such changes from unnecessary and expensive compliance conditions.

Those responsible for planning Melbourne finally seem to recognise the great contribution made by the city’s diverse array of social, arts and cultural enterprises. For the past two decades, start-ups, studios and venues have struggled against increasing rents, threats of closure from encroaching residents, unnecessary planning categorisations and prohibitive building standards.

These activities can no longer be consigned to planning afterthoughts or after-dinner entertainment for the comfortable classes. They have a vital role in reinvigorating Victoria’s economy, and should be put front and centre in strategies to attract visitors again to the state, city and regional centres.

None of this should preclude the possibility of genuine temporary uses, of course. Land and buildings left vacant for no good reason should be squatted. In some European cities contracts can be drawn up between absentee owners and users that allow the users to stay rent-free on the basis that they maintain and even improve the structures. In cases where the city is the owner, squats are often effectively legalised.

All these things happen in Berlin because the people have made it so.

In Melbourne, now, this thinking has a basis not only in equity, but in economic recovery.

Dr Kate Shaw is an urban geographer at the University of Melbourne.