When Oprah Winfrey ended her signature daytime talk show in 2011, it was a massive event that was watched by, according to Nielsen, 16.4 million people, commanding ad dollars unprecedented for daytime TV. During her last week of episodes, she was surprised onstage by the likes of Tom Hanks, Madonna, Stevie Wonder and a pre-slap Will Smith, as she appeared before an audience of 13,000 people. Fans flew to Chicago from as far away as Georgia and even Mumbai, India. The New York Times described it as the biggest moment in television since Johnny Carson signed off in 1992, and publications including The Hollywood Reporter, the Washington Post, New York Magazine and Jezebel liveblogged it.

This week, as Ellen DeGeneres’s own talk show concludes after 19 seasons, almost two years after allegations of a toxic workplace behind-the-scenes arose in the summer of 2020, there’s much less fanfare. One factor is that Oprah was more of a lifestyle show, with her take on things sprinkled among conversations with celebrities, and another is that TV audiences today are more fragmented than ever; shows just don’t draw 2011 ratings. Still, The Ellen DeGeneres Show is going out more quietly, and this lower-profile bow — no grand press tour — was at least partly by design.

As DeGeneres told the Hollywood Reporter in an interview published Wednesday, she was very focused on the events as they unfolded, meditating on her intention to enjoy it while it lasted. “I knew going in that this season was going to be my last season, so I really tried to take everything in,” she said. “And it’s funny because the last couple of months I was more emotional than I was in the last week or two. I got really emotional about two months out, but that last week I wasn’t because I really just wanted to enjoy it. I was working with [former monk] Jay Shetty a lot, too, on being present and I was. I was very present for all of it.”

‘A tricky position to be in’ 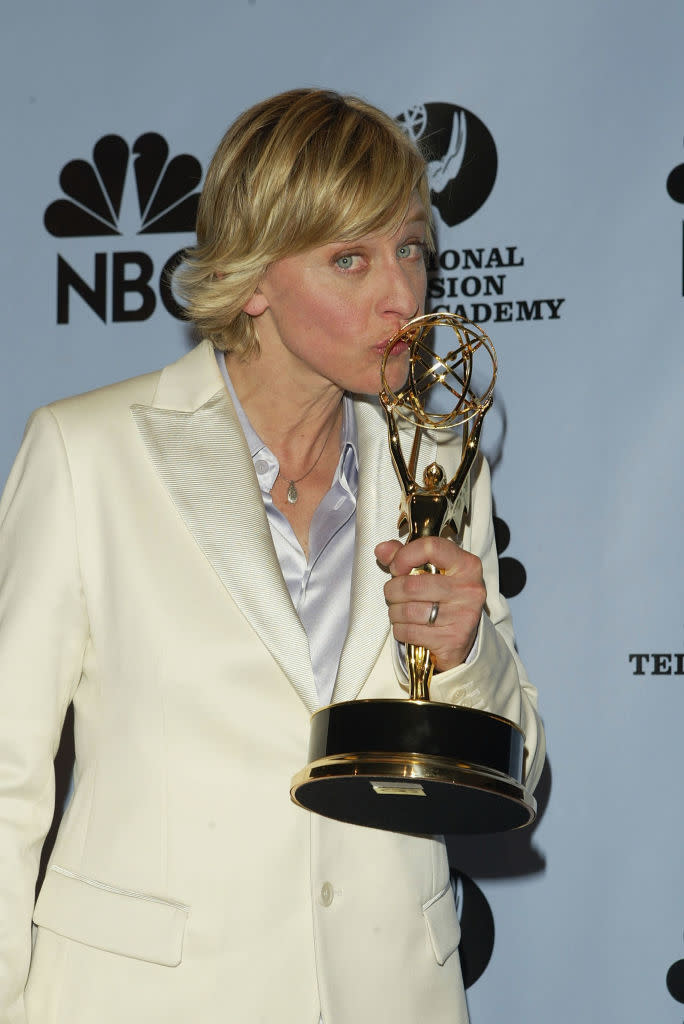 Like Oprah, Ellen, which premiered on Sept. 8, 2003, was a solid hit. With a mix of DeGeneres’s witty banter and dance moves, which she showed off daily at the top of the show, celebrity interviews and games with audience members, the show gained a reputation for being bubbly fun, led by a host whose image was all about being kind. And she was beloved, landing A-list guests and even outside gigs, such as hosting the Oscars in 2007 and again in 2014, when she snapped a star-studded selfie that went viral.

If only Bradley’s arm was longer. Best photo ever. #oscarspic.twitter.com/C9U5NOtGap

Rumors buzzed that the show was not a kind place to work, but for a while they were just that. Then, in April 2020, Variety reported that the show’s crew was upset with the way top producers had — and had not — communicated with them amid the COVID-19 pandemic, while they hired a nonunion company to help them film Ellen at DeGeneres’s home. Three months later, a Buzzfeed News report, citing former employees, described an environment where people were told not to speak to the star when they saw her and they lost their job after attending a family funeral. A Black woman recalled a situation where a co-worker told her, “I’m sorry, I only know the names of the white people who work here,” and other racist behavior.

At the time, the producers released a statement, which read in part: “Over the course of nearly two decades, 3,000 episodes, and employing over 1000 staff members, we have strived to create an open, safe, and inclusive work environment. We are truly heartbroken and sorry to learn that even one person in our production family has had a negative experience. It’s not who we are and not who we strive to be, and not the mission Ellen has set for us.”

The show then brought in WarnerMedia’s employee relations team and a third party to investigate, and, by the end of August, three lead producers were out, as staffers were offered apologies and more liberal perks. When DeGeneres returned to the airwaves in Sept. 2020, after the summer hiatus, she made good on a promise that she would address the toxic workplace allegations on the air. 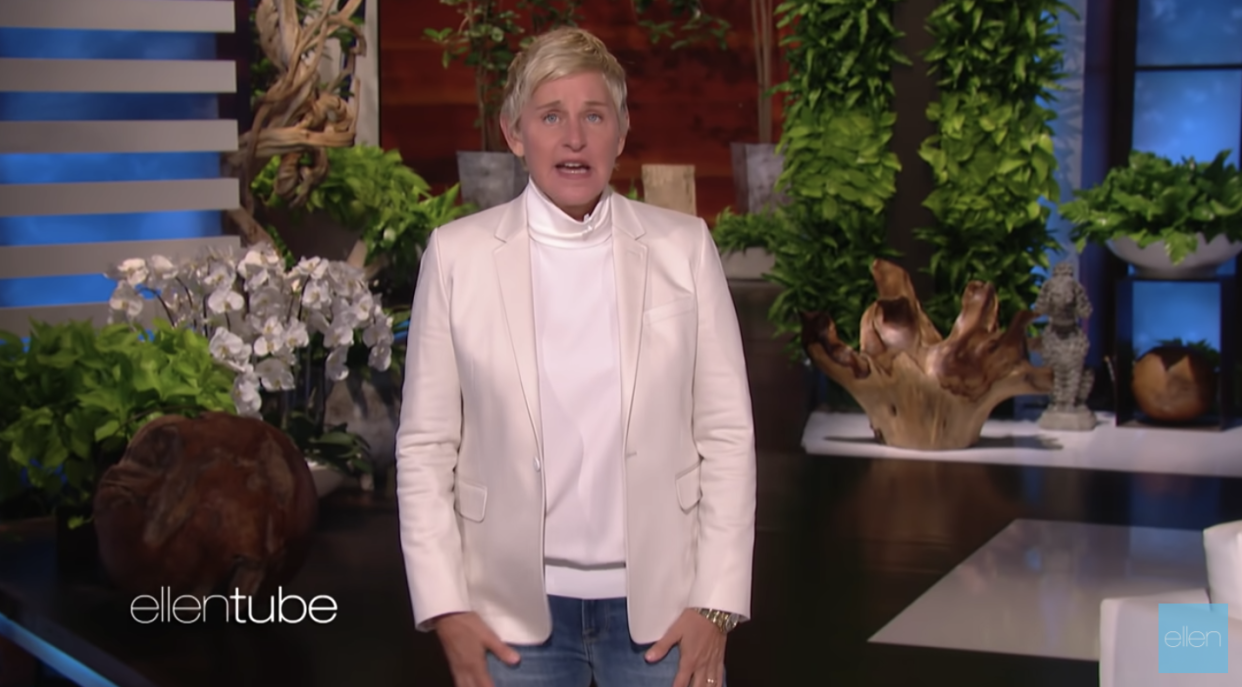 DeGeneres explained that “being known as the ‘Be Kind’ lady is a tricky position to be in,” because she’s “also a lot of other things,” including sad, mad, frustrated, anxious and impatient at various times.

“This is me and my intention is always to be the best person I can be,” DeGeneres said. “And if I’ve ever let someone down, if I’ve hurt their feelings, I’m so sorry for that. If that’s ever the case, I’ve let myself down… Because I always try to grow as a person, I look at everything that comes into my life as an opportunity to learn.”

Despite DeGeneres’s efforts, ratings for her show took a hit as the season wore on, according to numbers from Nielsen research published in the New York Times. Between September and March 2021, the audience declined from 2.6 million to 1.5 million.

DeGeneres announced in May 2021 that her next season would be her last. She said the toxic workplace allegations and ratings were not factors and the plan had always been to wrap it up when her contract expired in 2022, so that she could seek new challenges.

“Look, it’s going to be really hard on the last day, but I also know it’s time,” she told THR. “I’m a creative person, and when you’re a creative person you constantly need to be challenged, which is why I decided to host the Oscars or why I decided to go back to stand-up when I didn’t think I would. I just needed something to challenge me. And as great as this show is, and as fun as it is, it’s just not a challenge anymore. I need something new to challenge me.”

The final season of Ellen, which comes as several other long-running shows, including The Wendy Williams Show, The Real, The Dr. Oz Show and The Doctors conclude, too, has continued to feature the kind of family-friendly segments for which it’s known. Audience favorites, such as Sophia Grace and Rosie, the little girls who first performed “Super Bass” on the show when they were just 9 and 5 years old, returned to reprise their cover of Nicki Minaj’s track. Staffers spoke about their favorite moments, and video segments recalled memorable moments, such as the time DeGeneres was swarmed in Central Park. The host presented actress and activist Mila Kunis with a $30,000 check for the people of Ukraine. Julia Louis-Dreyfus applauded DeGeneres for breaking ground as a gay female comedian and having put on a show during such hard times in the world. Stars such as former first lady Michelle Obama, Kim Kardashian, David Letterman, Serena Williams, Jennifer Lopez, Halle Berry, Salma Hayek, and DeGeneres’s very first guest, Jennifer Aniston, returned to be one of her last.

Another one of the last people to sit across from DeGeneres was actually Winfrey herself.

If anyone knows what it’s like to end a long running talk show, it’s @Oprah. pic.twitter.com/7UsqYgbmMK

Winfrey said DeGeneres would be “so missed.”

‘I have to just trust’

Off-screen, DeGeneres had come to a better place after an emotional struggle.

“There was a time a couple of months out where I was crying every day,” she told THR the day before the finale. “I was really emotional, even though it was my choice [to end the show], and it’s the right choice. I knew it was time to end this chapter and to do something different, but still it was really emotional. But I did not want the last two weeks to be about that.”

The New Orleans native said she meditated daily on her intention to be present and enjoy it. She wanted that for her audience as well.

“I wanted people to be reminded of what we brought to television with the music and the games and everything,” she said. “It was more of a variety show than anything, and I wanted the last two weeks to be pure fun because I struggle with anxiety and depression and I know how important it is to have an escape. We’re reminded every single day of what’s going on in the world, from a sick family member to wars and fires and global warming. There are so many different things that make you sad.”

She said she’d been talked into staying three years earlier, which was, of course, before both the pandemic and the controversy. When asked, she said she didn’t regret having stayed through the latter.

“I have to just trust that whatever happened during that time, which was obviously very, very difficult, happened for a reason,” DeGeneres said. “I think that I learned a lot, and there were some things that came up that I was shocked and surprised by. It was eye-opening, but I just trust that that had to happen.”

During that very last broadcast, DeGeneres marveled at the difference in the world since when she started — it was illegal for gay people to marry, and she was told not to say “gay” — and now, when she regularly refers to her wife, Portia de Rossi, who sat in the audience.

She notably thanked her staff, and she also encouraged fans to open their hearts. “I hope that what I’ve been able to do in the last 19 years has made you happy, and I was able to take a little bit of pain away from a bad day or anything you’re going through. And I hope I’ve been able to inspire you to make other people happy and to put good in the world, to feel like you have a purpose. And I’ve said it before but I’ll say it again… If I’ve done anything in the past 19 years, I hope I’ve inspired you to be yourself, your true, authentic self. And if someone is brave enough to tell you who they are, be brave enough to support them. Even if you don’t understand, they’re showing you who they are, and that’s the biggest gift anybody can ever give you,” she said. “And by opening your heart and your mind, you’re gonna be that much more compassionate, and compassion is what makes the world a better place. Thank you so much for being on this journey with me. I feel the love, and I send it back to you. Bye.”