Home » World News » Eddington: The way out of lockdown is already here

Eddington: The way out of lockdown is already here

Sir Rod Eddington believes the way out for Melbourne and Victoria is right under our feet.

Throughout the pandemic, work has continued on the city’s two largest infrastructure projects, the Metro Rail Tunnel and the West Gate Tunnel.

Both projects are dear to the Andrews government and to Sir Rod, derived from the plan he delivered to John Brumby 12 years ago to free Melbourne from the social and economic consequences of traffic congestion.

Today, as Victoria faces social and economic consequences of a far greater magnitude, Sir Rod sees the twin tunnels less for the trucks and trains they will carry than the lessons they provide about how to safely reopen the city and state. 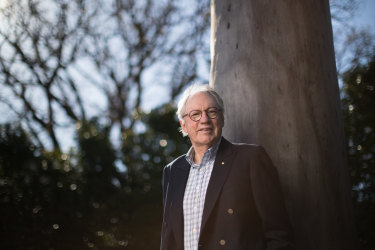 “We demonstrated through the first lockdown that the construction industry itself came to grips with how to deal with this,’’ Sir Rod tells The Age. “They put a lot of time, effort and energy into doing it and it worked. Construction sites very quickly became safe places to work.

“That is not just true of construction. If you talk to restaurateurs, if you talk to people who run schools and universities and sporting venues and businesses in the CBD, a lot of people have given a lot of thought to this. They have all got to have a voice in this.

“The answers are actually in our community here in Victoria already.’’ 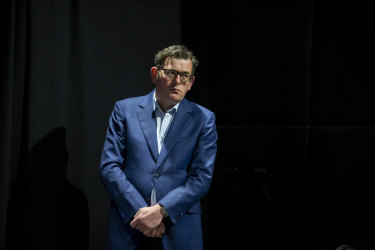 Today was to be the day Melbourne emerged from our six-week, stage four lockdown. Instead, the government’s road map out of COVID-19 restrictions released at the start of this week charts a slow, uncertain route.

We remain under stay-at-home orders and a curfew is still in place after dark. We cannot yet see a time when people can return to the places that breathe life into this city – the shops and restaurants and cafes and bars and theatres and galleries and libraries and the great, towering stands of the MCG.

Starting today, The Age will publish a series of stories in which prominent Melburnians – leading figures in business, education, the unions, the arts and the community – offer constructive ideas about the way forward.

We start with Sir Rod, a big-thinking, former aviation executive and company chairman whose ideas have reshaped contemporary Melbourne.

Sir Rod says Victoria succeeds when people and organisations with competing interests agree to work together.

When he returned to Melbourne in 2005 after 30 years spent running British Airways and other international airlines, he was asked to chair what was then known as the Victorian Major Events Company.

Although former premier Jeff Kennett is credited with overseeing Melbourne’s major events boom, it was his Labor predecessor, Joan Kirner, in unlikely partnership with the Liberal Party’s Ron Walker, who established the company and gave it a mission.

“We built a reputation as the world’s most liveable city and the events and sporting capital of the world,’’ Sir Ron says. “It worked because the government, businesses, officials, we all worked together.’’ 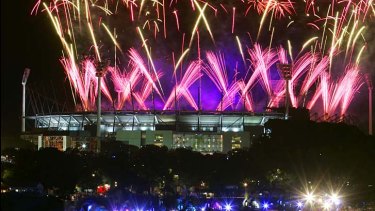 The MCG lights up during a major sporting event.Credit:AP

For reasons not clear to those outside Premier Daniel Andrews’s close circle of confidantes and advisers, this collaborative approach seems lacking from Victoria’s pandemic response.

“If you speak to people in the business community, they will tell you there has been little evidence of that in the past six months,’’ Sir Rod says.

The $11 billion Metro Tunnel is a case study of what could happen in other industries if the government looked for ways to re-open more businesses instead of reasons to keep them shut.

At the start of every shift, workers pass through what is colloquially known as a “heat room’’, where their body temperature is checked for signs of infection. They fill out an online questionnaire about how they are feeling and where they have been since their last shift.

If any workers are running hot, the information is immediately sent to the phone of a site manager. The early warning doesn’t make the site COVID-proof but it mitigates the risk of an outbreak. 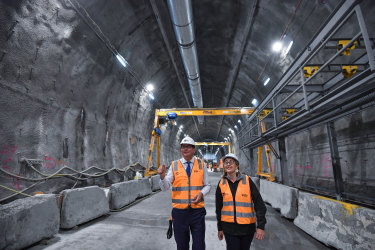 As the chair of Infrastructure Partnerships Australia, Sir Rod has a strong interest in seeing major projects continue through the pandemic. He says it is notable that in Victoria’s first lockdown, work continued at Melbourne construction sites without causing major COVID-19 outbreaks.

He is disappointed that when the Andrews government announced its second lockdown, it didn’t seek to apply these proven methods more broadly across construction and potentially, other industries. Instead, some construction sites were closed and others reduced to a quarter the size of their normal workforce.

“Through good luck and good management, we got through the first lockdown very well and a lot of important parts of the economy and the community continued to operate,’’ Sir Rod says. “We then allowed the bug to get out of quarantine and into the community, tragically into aged care facilities, and our response to that was to ignore the lessons learned in the first lockdown.

“There is no sense there has been any meaningful reach-out to business men and women who have gone to great lengths to adjust their businesses so they can continue to operate in the COVID world.’’

As a first step towards resetting the relationship between government, business and the community, Sir Rod suggests that Mr Andrews could admit the things his government got wrong.

“The thing about saying that openly, you create an environment where people can come to you. People understand the government had to make a lot of decisions on the fly. They didn’t expect them to get them all right. If you think back to the first lockdown, they got a lot of things right.’’

Sir Rod, through his extensive business network, has closely watched the approach taken by other countries, particularly in Europe, where most jurisdictions are tolerating higher COVID-19 caseloads than Melbourne to keep their societies and economies open.

He says Melbourne must find its own balance, one that acknowledges the importance of international education, tourism and major events to the state’s economy and doesn’t rely on the availability of a vaccine.

“If you close down the main drivers of our economy – education and tourism – you destroy the lives of many of the people who are employed in those parts of the economy and that has profound health implications for those people,’’ he says.

“My experience has been that the vast majority of people in Victoria are deadly serious about this bug but they want to find ways to live with it because they don’t think it is going to get eliminated any time soon, if ever.’’

Get our Coronavirus Update newsletter for the day’s crucial developments and the numbers you need to know. Sign up to The Sydney Morning Herald’s newsletter here and The Age’s here.