He took part in the publicity stunt after his party’s major upset in the Chesham and Amersham by-election saw them take the previously safe Conservative seat with a massive majority.

In an extraordinary result, the Lib Dems defied years of electoral woe to storm the ultra-safe seat – which has been held by the Conservatives since it was created in 1974.

And he decided to emulate this in physical form at a youth centre in Chesham, Bucks, this morning, as he went to congratulate the new MP Sarah Green.

He used a small orange mallet to take down a chest-high wall of blue bricks hastily set up at the indoor venue.

There was laughter as he help up the hammer and said it was an ‘orange force’, adding: ‘Do you know what happens when a really strong and powerful orange force goes against a blue wall? Stand back – let me show you.’ 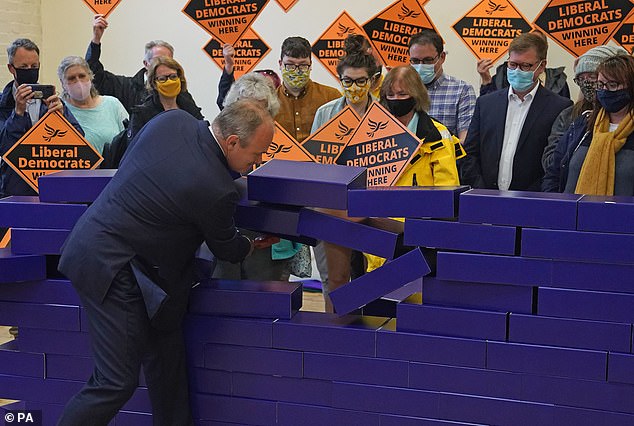 He took part in the publicity stunt after his party’s major upset in the Chesham and Amersham by-election saw them take the previously safe Conservative seat with a massive majority. 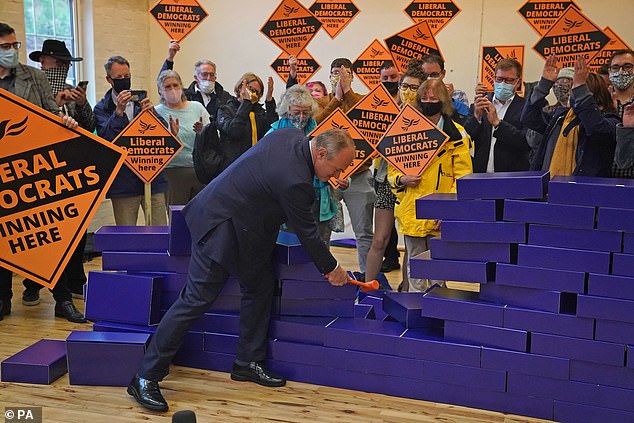 He used a small orange mallet to take down a chest-high wall of blue bricks hastily set up at the indoor venue. 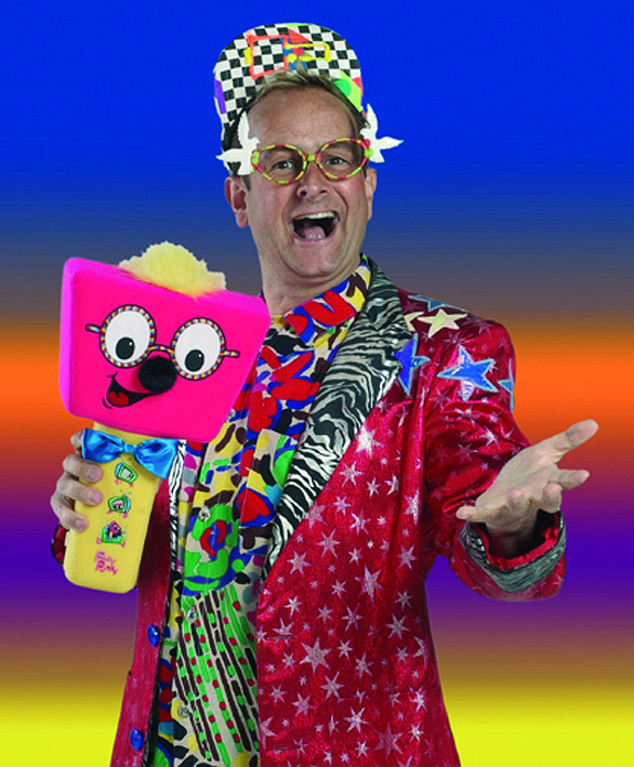 Timmy Mallett was a popular children’s presenter in the 1980s and early 1990s who carried a soft toy mallet that he would use to playfully hit children on the head with.

Timmy Mallett, now 65, was a popular children’s presenter in the 1980s and early 1990s who carried a soft toy mallet that he would use to playfully hit children on the head with on programes including the Wide Awake Club and Wacaday’.

The stunt drew comparisons with one performed by Boris Johnson ahead of the 2019 election. On an election visit to JCB he drove through a fake brick wall in a digger emblazoned with the words ‘get Brexit done’.

In a crumb of comfort for Mr Johnson, Labour’s 1.6 per cent share of the vote was its worst performance in any by-election since the Second World War.

The bombshell news will fuel fears that the Brexit-driven political realignment that allowed Mr Johnson to smash Labour’s Red Wall is now loosening his grip on traditional Tory heartlands.

Chesham & Amersham, in Buckinghamshire on the outskirts of London, voted strongly for Remain at the 2016 referendum. Opposition to the overhaul of planning rules and HS2 are also thought to have been a major factor – with Lib Dem candidate Sarah Green against the rail project even though the national party supports it.

In a round of broadcast interviews this morning, policing minister Kit Malthouse said the defeat was ‘obviously very disappointing’ – while arguing governments typically perform badly in mid-term by-elections.

But Tory backbencher Bob Blackman told MailOnline that it was a wake-up call on how badly government planning reforms are viewed across the south, and pointed out that the late former MP Cheryl Gillan had been the ‘foremost campaigner’ against HS2.

‘This is Tory heartland and very expensive housing. People were obviously annoyed about HS2. A lot of the countryside will be despoiled,’ Mr Blackman said.

‘A lot of us have been saying for quite some time, it’s all very well to say we want to see more housing built… but they have got to listen to the advice we have given. Local plans should be made sacrosanct so local people have their say about what is going to be built where, and not have national targets that ride roughshod over local people.’

Mr Blackman added on the planning loosening: ‘Across the South East it is the real threat.’

Other MPs voiced concerns that Mr Johnson was losing more affluent ‘bookshelf’ Tories for Red Wall voters who ‘go down the bookies’.

The loss appeared to surprise even Conservative MPs who have been spending a lot of time campaigning in the constituency. Lib Dem claims that they were on the cusp of victory had been dismissed as ‘what they always say’, with predictions that any challenge would be seen off once postal votes were counted.

Mr Davey said: ‘People talked about the red wall in the North, but forgotten about the blue wall in the South, and that’s going to come tumbling down if this result is mimicked across this country.’