DEVON and Cornwall has today been revealed as the worst area for flouting lockdown in the UK, new figures revealed today.

The regions accounted for more than a fifth (21 per cent) of all lockdown offences in the UK between March 23 and June 30 this year – more than any other authority. 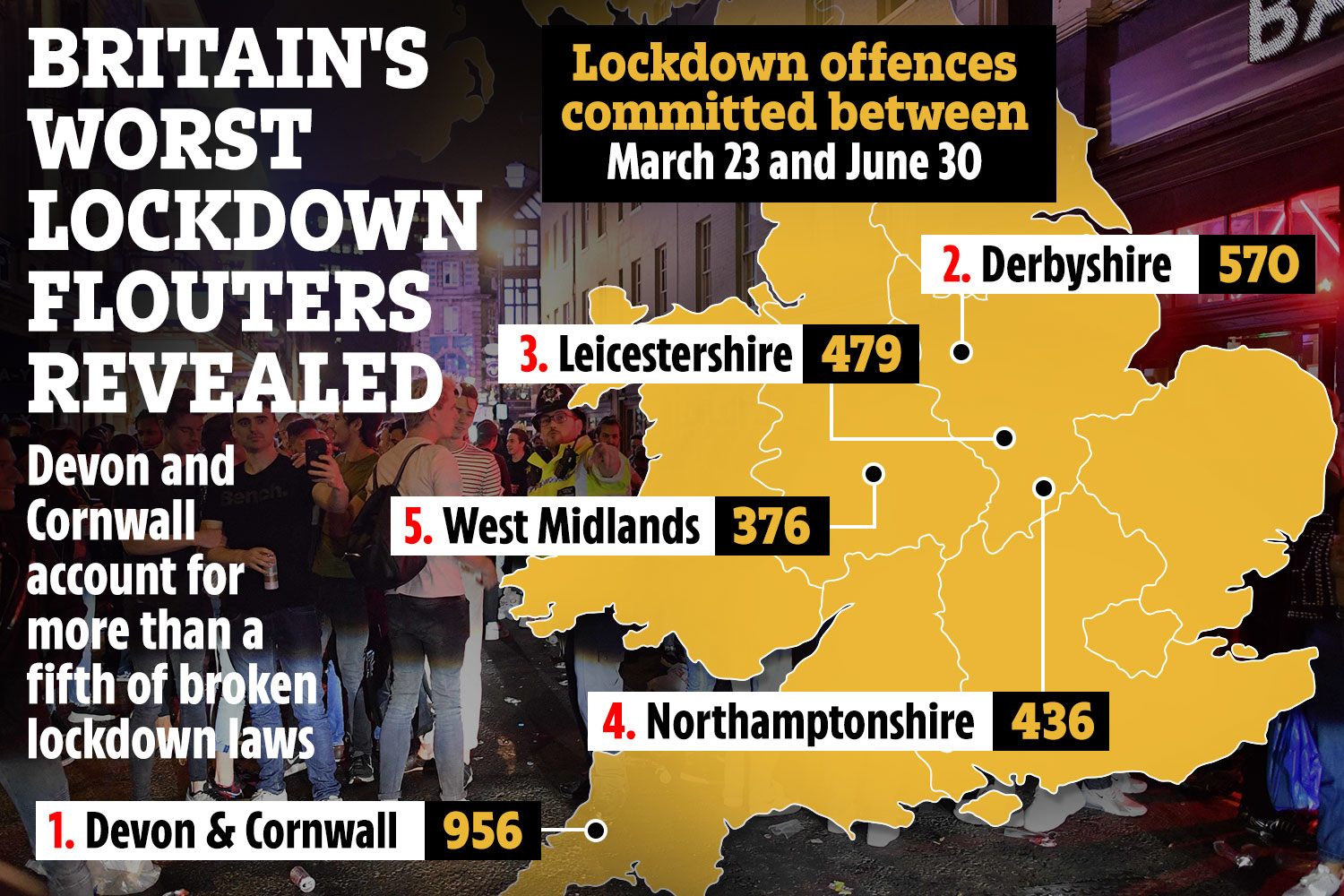 In total, the regions caught 956 rule breakers since lockdown was imposed on March 23, almost double Derbyshire – the second worst culprit – which recorded 570 offences.

It comes as cases in Devon and Cornwall more than doubled in the week ending September 17, a rise of 246% compared to the previous week.

Leicestershire, which saw Leicester plunged into the UK's first local lockdown back in July, recorded 479 lockdown offences between March and June, followed by Northamptonshire (436) and the West Midlands (376).

The data, collected by the University of Law (ULaw) shows Cambridgeshire had the least amount of lockdown lawbreakers over the same period, recording only four offences including warnings and charges.

Jennifer Schmidt-Petersen, Programme and Student Lead for Policing Programmes at ULaw said: “While public authorities were already under immense pressure during lockdown earlier in the year, it is shocking to see this research highlighting the huge number of those defying lockdown rules set by the Government, which were there to protect us.

"During this same time frame, public authorities around the UK also dealt with a total of 68,747 general crimes, further putting pressure on their resources.

“Lockdown was hard for many people and the laws were put in place in order to slow the spread of the virus, as is shown with Leicestershire, not abiding by these lockdown rules may result in us being placed under tighter restrictions once again right across the UK."

The findings come as the number of Covid infections rose by 6,178 to 409,729 in the UK yesterday – the nation's third highest daily rise ever.

Boris Johnson this week begged Brits to show "discipline, resolve and the spirit of togetherness" in order to slow the surge and avoid a second lockdown.

He introduced a 10pm curfew for all pubs and hospitality venues from today, slashed the size of weddings from 30 to 15 and brought in tougher fines for rule breakers.

The PM told the House of Commons the measures were imperative to stop growing infection rates and warned rule breakers they could face tougher restrictions if the flout new orders.

He said: "If we were forced into a new national lockdown, that would threaten not just jobs and livelihoods but the loving human contact on which we all depend.

"We must do all we can to avoid going down that road again.

"But if people don’t follow the rules we have set out, then we must reserve the right to go further."