Offshore social media platforms with at least 250,000 Australian account-holders would be required to set up a local company to handle defamation complaints as part of a federal government plan to make tech giants take greater responsibility for defamatory content posted by anonymous users.

An exposure draft of proposed anti-trolling laws, released today, makes clear social media companies will be considered “publishers” of users’ comments made in Australia on their platforms and can be held liable for defamatory comments, while media companies and individuals with public Facebook pages will not be responsible for third-party comments. 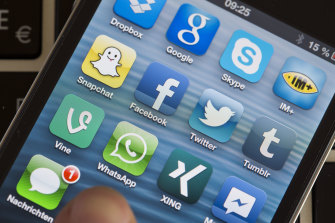 The federal government has announced a change to defamation laws to tackle anonymous trolls.Credit:Getty Images

Prime Minister Scott Morrison has signalled the Coalition’s tough-on-tech platform will be a key election pitch to voters ahead of next year’s federal poll.

Characterising the companies as a potential threat to Australians, Mr Morrison said on Wednesday the government was “ripping the mask off” trolls and issuing an edict to the tech giants of: “You built it, you make it safe”.

The proposed changes come as Coalition MPs, including Defence Minister Peter Dutton and Victorian senator Sarah Henderson, have shown their willingness to pursue defamation actions over comments on social media.

The proposed laws will reverse a High Court ruling that the owners and operators of public Facebook pages, including mainstream media companies and public figures, are legally responsible as “publishers” for the defamatory comments of third parties. The person posting the comments will continue to be liable alongside the social media companies, and can be sued directly for defamation.

But there can be jurisdictional issues with bringing defamation proceedings against entities that are not located in Australia. The proposal aims to create an incentive for platforms to set up an Australian “shopfront” by giving them a defence against being held liable for the defamatory comments of users if they meet specific conditions.

Platforms with at least 250,000 Australian users would need to set up a local entity to handle complaints from users about potentially defamatory comments, including dealing with requests for information about the identity of an anonymous commenter to enable an alleged victim of online defamation to sue the person directly.

However, the anonymous commenter must consent to their details being disclosed by the platform.

If consent is not given, a person could apply to the Federal Court for a new order requiring the platform to disclose the identity of the anonymous commenter. This appears similar to an existing process in Australia known as preliminary discovery, and it is not yet clear how this would be cheaper or easier than this process.

To escape liability for the defamatory comments of users, the social media companies would need to reveal the identity of the anonymous commenter, either because the person agreed to their details being provided or the court order was made.

Professor David Rolph, an expert in defamation law from the University of Sydney, said: “The reason why social media companies have not been defendants in Australian defamation cases until now is due to problems of jurisdiction and enforcement.

“A reform to require social media companies to have a presence in Australia for the purposes of jurisdiction and enforcement will overcome a significant impediment that plaintiffs have faced.”

The High Court ruled the media outlets were legally responsible as “publishers” of those comments, even if they were not aware of them. The case will now proceed to a NSW Supreme Court trial to determine if the comments were in fact defamatory and if the media outlets have any defences.

The change proposed by the federal government would mean operators of Facebook pages would have no legal responsibility for comments on their pages and would not have a duty to monitor comments.