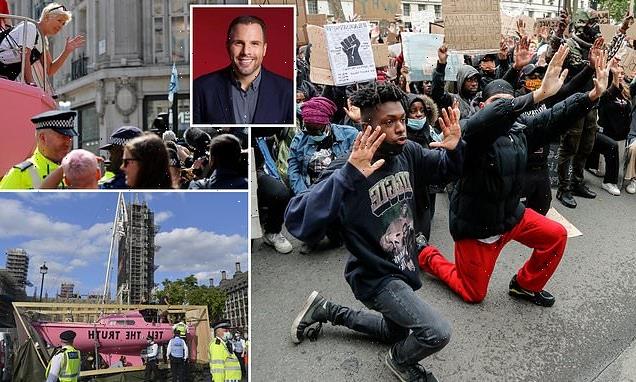 DAN WOOTTON: Why do our woke broadcasters love to cover a protest – unless it’s against lockdown?

I’ve never been on a protest march in my life.

They usually cause chaos for hardworking folk attempting to go about their day to day business and usually include smelly troublemakers who would be much better off attempting to make changes via channels that are more likely to lead to real change.

But I respect people’s democratic right to protest under any circumstance and appreciate it’s a cornerstone of a free political system.

That’s why I’ve been so disturbed to see the virtual media blackout of the massive anti-lockdown protests in London over the weekend.

The BBC, ITV, Channel 4 and Sky News have devoted hundreds of hours over the past year to less well attended demonstrations by Black Lives Matter, anti-statue, Extinction Rebellion and women’s rights supporters.

Yet the thousands of folk who turned up to march against the biggest erosion of our freedoms and civil liberties in modern history are given short shrift. 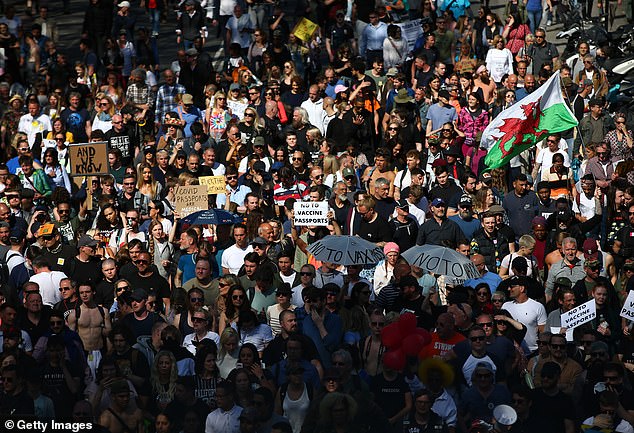 I’ve been so disturbed to see the virtual media blackout of the massive anti-lockdown protests (pictured on Saturday) in London over the weekend, writes DAN WOOTTON

It seems our broadcasters, which claim to be impartial, have made a decision to only accurately cover the demonstrations of causes that the London metropolitan elite believe in.

In fact, the only significant reportage provided by the BBC was to denigrate those marching as QAnon-supporting anti-vaxxers.

That would be the same as trying to describe all those marching for BLM as Antifa anarchists, rather than folk who believe in racial equality.

There was some despicable violence against police officers, which I utterly condemn. Those responsible should be arrested and feel the full force of the law. 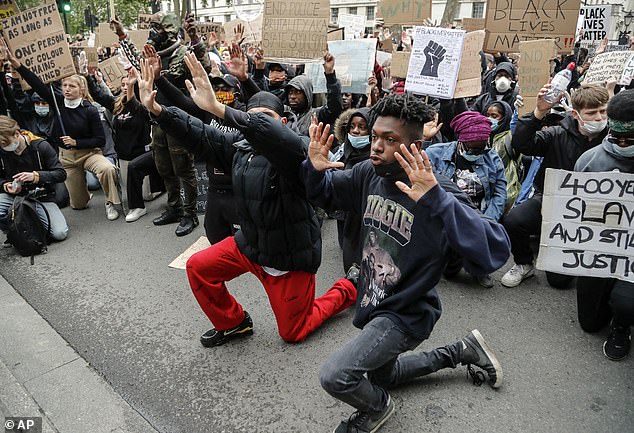 Were there cranks and conspiracy theorists in attendance? Probably, like at every protest march.

But it’s very obvious to me that the vast majority of people were Brits from all demographic groups peacefully protesting their right to reclaim freedoms that a year ago seemed impossible to believe the Government could take away from us.

The right to visit an elderly relative in a care home.

The right to attend a funeral and hug a grieving widow.

The right to invite a loved one over to your house.

The right to get married in front of all your nearest and dearest.

The right for your child to go to school without wearing a mask.

The right to run your business at a profit to feed your family.

The zealotry is not coming from sensible people like me and the protestors looking at the data and pushing against lockdown, it’s owned by those who believe we should remain perpetually in one, even though the facts on the ground clearly shows us it is time for all restrictions to be lifted.

But that didn’t stop the pious virtue signallers online attempting to disparage those who decided to protest against lockdown, even though they were strangely silent about other similar marches. 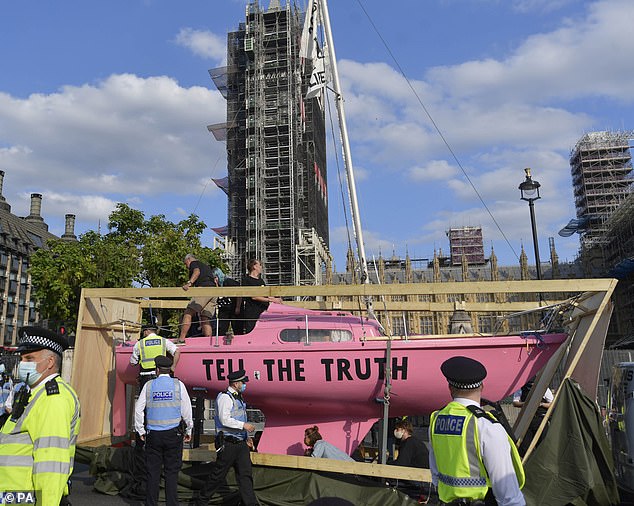 Police are seen surrounding the Extinction Rebellion pink boat that had been parked in Parliament Square, London, on the last day of 10 days of demonstrations in 2020

She tweeted: ‘Dear Everyone Marching in Oxford Street, please go home, switch on the news and look at the footage coming out of India. That is what happens when the virus overruns a health system. We’ve been trying so hard to stop that happening here. Don’t p*** on all our chips. Ta.’

That’s funny. Because on March 13 it was the same Sue Perkins who tweeted a picture of a mass gathering for the murdered Clapham woman Sarah Everard, which she described as an ‘extraordinary image’.

There was no criticism of the thousands who had turned up at that vigil (which I also believe should have been allowed to go ahead) without any social distancing.

What’s changed, Sue? Are there only certain types of democratic protests you think are acceptable?

Further, to raise India is ridiculous and misleading. It doesn’t take into account our highly successful vaccine programme, which this weekend saw over half the population jabbed, including the vast majority of those with any realistic chance of dying or getting seriously ill from Covid-19.

Sadly, there was only one broadcaster that accurately reported on the peaceful anti-lockdown march in London and they were on the other side of the world. 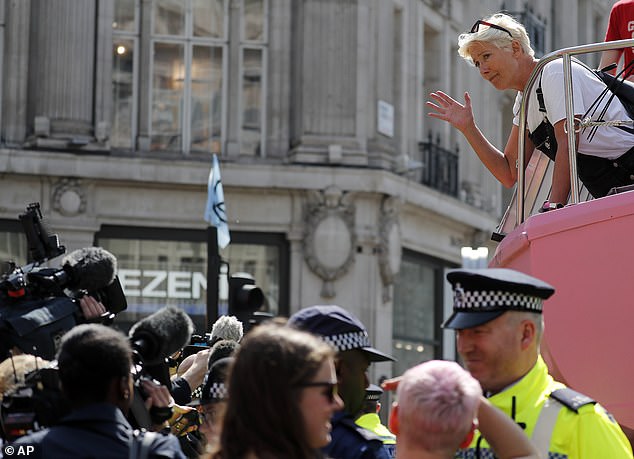 In a one minute and 51 second report, which has now gone viral online, Sky News Australia accurately summed up the event, without a hint of bias.

The excellent Rita Panahi reported: ‘Yes, massive crowds. Peaceful, which is lovely to see. They are wanting their freedoms reinstated.

‘They are wanting to be able to see their family, hold funerals where numbers aren’t limited and people aren’t socially distanced, and get businesses back to operating at full capacity, particularly given how well they’ve gone with their vaccine rollout.

‘So the masses were out today and there is a fightback.

‘So there’s a lot of people who feel they’ve been voiceless throughout this pandemic…including medical experts who’ve come out and said: ‘What we’re doing is actually not based on the evidence and it has all sorts of unintentional consequences that are negative, particularly when you look at the rates of cancer, heart disease and serious illnesses not being diagnosed early.’ 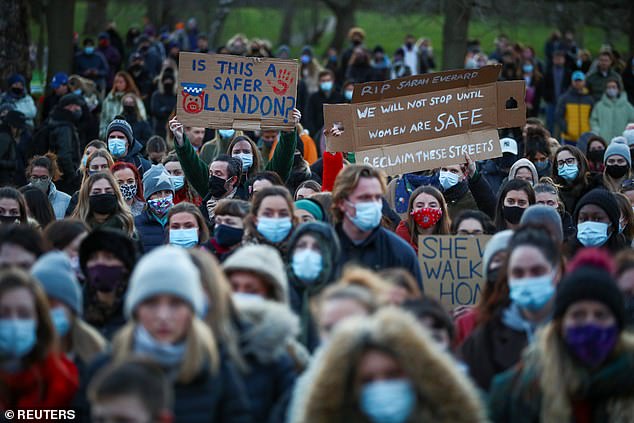 People gathered at a memorial site in Clapham Common Bandstand, London, in March following the kidnap and murder of Sarah Everard

And they remain voiceless, thanks to our broadcasters whose coverage of protest events is so steeped in their own biases they can no longer be taken seriously.

What there will be no shortage off in the broadcast media today, however, is infinite coverage of a private comment the Prime Minister Boris Johnson is said to have made after being bullied into a second national lockdown last October.

According to an agenda-setting exclusive in today’s Daily Mail, the PM said in a candid moment to a handful of key advisers and ministers: ‘No more f***ing lockdowns – let the bodies pile high in their thousands.’

Now that clearly was not a wise comment to make around some Downing Street snakes who cannot be trusted.

But what is most fascinating about today’s excellent reporting by Simon Walters and Andrew Pierce is that it showed the massive frustration Boris felt to be forced into locking the country down for a third time, given the tidal wave of non-Covid deaths and explosion of poverty that he knew would come with such a decision.

I’m glad to finally hear Boris was doing everything possible to resist such a move and was angry about having to lock down the country again.

What a shame he feels unable to express himself honestly in public, where his narrative suggests he has become a lockdown zealot.

Lockdowns have huge costs and, looking around the world, evidence of their effectiveness to do anything other than temporarily supress the virus is far from clear.

Here’s the fascinating thing: If Boris Johnson wasn’t in a straightjacket thanks to the SAGE extremists and professional scaremongers surrounding him, he might have been on the anti-lockdown protest march himself.

But the PM has betrayed his libertarian instincts for political expediency, the cost of which the UK will feel for many years.