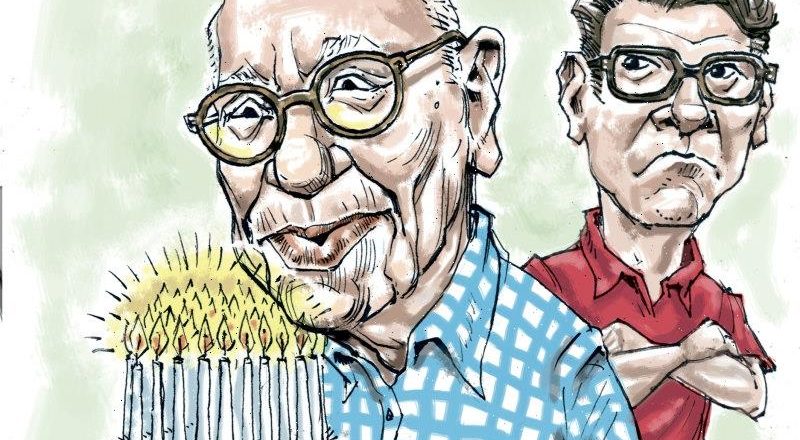 Footy fans are packing away their scarves after the sun set on another AFL season at Perth’s Optus Stadium on Saturday. While the Mighty Melbourne Demons and the Western Bulldogs players were scrapping it out on the field, the real action took place inside the Victory Lounge, as AFL chief executive Gillon McLachlan hosted 400-members of the Western Australian power set. Premier Mark McGowan led the roll-call of state MPs including Sport Minister Tony Buti and anonymous Opposition Leader Mia Davies, while federal Attorney General Michaelia Cash, accompanied by assistant minister to the prime minister Ben Morton, sports minister Richard Colbeck and Senator Patrick Gorman represented the feds. 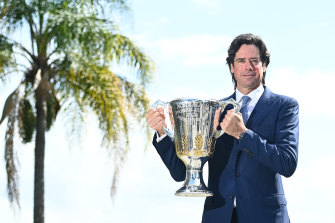 AFL supremo Gillon McLachlan hosted a knees-up for the rich and famousCredit:Getty Images

McLachlan delivered a zinger when introducing Prem McGowan. “Premier aside, the power in Perth does seem to be concentrated … And clearly this is a room where 10 of you think they run Perth, but as they say in the classic film Highlander ‘there can only be one’ and well, it’s great to see you here Kerry.” Oh, how Seven West chairman Kerry Stokes laughed.

But the zingers didn’t stop there. McLachlan followed with a dig at WA’s Mr Everywhere – (and “beautiful tenor voiced” Hale School singer ) Basil Zempilas, noting “Perth is a city with its quirks … it’s the only city in the world where the Lord Mayor commentates his own meetings.” Gillon, you’re not wrong.

Meanwhile, muted celebrations in Melbourne, where a small band of Melbourne Football Club supporters gathered at midday on Domain Road outside the Botanical Hotel to walk the Tan. Clockwise, obviously, past MFC feeder academy Melbourne Grammar School. Spotted among the throng were ex-club directors David Turin and Russel Howcroft. 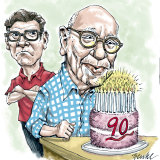 Media tycoon Rupert Murdoch is thoroughly enjoying himself in his 90th year. His News Corporation has bought gossip website TMZ, which in 2012 revealed the Murdoch inconsistencies towards the Royal Family match its stance on climate change via the headline: “Rupert Murdoch – leave Prince Harry alone!”

Murdoch has also bought up anti-Meghan Markle British broadcaster Piers Morgan in a global deal which will include a nightly show on Sky News Australia at the expense of… Peta, Alan, Chris, Paul? Well, watch this space. Mr Morgan doesn’t do daytime!

Plus, Daddy M managed to miss out on dinner in New York with Prime Minister Scott Morrison, Nick Greiner and Arthur Sinodinos, dispatching key lieutenant Robert Thomson to be grovelled at in his place. Winning!

But all that has played second fiddle to Murdoch’s really big project: his birthday party.

It was just over a week ago that KRM and his fourth wife, Jerry Hall, 65, threw open the doors of Holmwood, their £11 million ($20 million), 11-bedroom Georgian palace in the Chilterns, west of London, to about 150 of their nearest and dearest friends for the mogul’s much delayed 90th birthday.

Fittingly, the heritage-listed Holmwood was once the residence of the poet Alfred, Lord Tennyson, the 19th century British equivalent of a Sky News anchor.

Just one thing seemed to be missing: Murdoch’s youngest son James, who split from the company last year after expressing unease about the editorial direction of its mastheads.

Murdoch Jr was not spotted and his apparent absence was a hot topic of conversation.

The 48-year-old son was absent from the lengthy video tribute, put together by Murdoch’s TV-producing daughter Elisabeth, which starred eldest son Lachlan Murdoch, former prime ministers John Howard and Tony Abbott as well as UK prime minister Boris Johnson and which was cheekily said to include the theme tune to the HBO drama Succession, a totally fictitious drama about a dysfunctional media dynasty.

CBD approached spokespeople for both Murdochs, who observed a mafia-like omerta in response to our questions.

Senate president Scott Ryan sounded the starting gun on two races last week when he announced his retirement from politics after nearly 15 years. In Victoria, a pre-selection process to fill the casual vacancy left by Ryan – who occupies the sought-after number one position on the state’s Coalition Senate ticket. But in federalParliament, Ryan’s colleagues are sizing up their chances of landing the prestigious Senate president gig. The position comes with serious perks – a sprawling President’s Suite. “It’s seriously plush,” one MP told CBD. Behind a grand entrance and about a zillion flags, the suite includes a full-sized dining room, a well-appointed reception room, a kitchen, art from the parliamentary collection, an internal courtyard and – luxury of luxuries – windows that actually open. The President’s Suite is one of two in the building where the windows can be opened for ventilation. A privilege not even afforded to the Prime Minister.

The President’s suite – which caters to the President’s administrative responsibilities which include hosting international delegations and foreign heads of state – also comes with some serious history. Queen Elizabeth visited the suite in 1988, which also includes a “Queen’s Robing Room” where the sovereign dons ceremonial robes to open the house. A suite worth fighting for.