Some local councils that have promised their residents they will introduce food waste collections this year are now unable to do so because processing facilities for food organics and garden organics (FOGO) are at capacity and too few people want to buy the resulting compost. 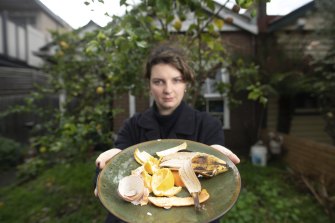 Zoe (Helga) Alsop with food scraps from her housemates outside her Clifton Hill home.Credit:Penny Stephens

But Melbourne, Yarra, Port Phillip, Brimbank, Maroondah and Manningham councils are yet to introduce the service. Several say a lack of processing capacity is holding them back.

The City of Yarra was meant to bring in food waste collection this year but provision for it has been dropped from the council’s budget and no date has been set for its introduction.

Mayor Sophie Wade said the delay was because there was not capacity to take any more waste at present.

In addition, “the compost result isn’t as desired by the market as one might hope”, Wade said.

“If you’re producing a whole bunch of this stuff that isn’t actually useful, it’s going to end up in landfill anyway,” she said. “What we’ve got at Yarra is a really keen community and a really keen bunch of councillors, but basically we’re hitting a brick wall … It’s not a money issue; it’s a ‘no one wants the waste’ issue. We’ve been actively told to slow down and prioritise other things.”

The City of Melbourne is undertaking a trial FOGO system for 20,000 households but is yet to implement it citywide. Wyndham is building its own facility and will not begin a trial until next year. Port Phillip and Manningham both want to introduce a FOGO system next year and Maroondah did not respond to a request for comment.

Manningham Mayor Michelle Kleinert said a lack of processing facilities was one of the reasons the council’s scheme was not scheduled to start until next year.

“In order to accept food with garden waste in Manningham, we, along with the other eastern region councils, needed to procure a new processing facility due to the lack of local processing capacity for organics,” she said. 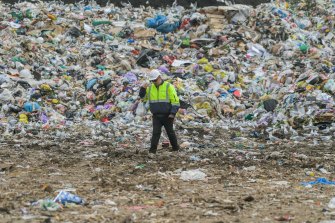 The state government wants all councils to have FOGO collections and processing by 2030.

A government spokesperson declined to comment on whether processing facilities were at capacity but said many councils had indicated they wanted to start food waste and green organic processing before the 2030 deadline.

“The government is investing in new facilities to build capacity in this burgeoning industry, which will take time to develop as we work towards our 2030 goal,” the spokesperson said. “Four facilities will have been commissioned by the government by the end of 2022, which will provide additional capacity.”

Sustainability Victoria’s most recent data showed 1.3 million tonnes of food waste was collected in 2020. About a quarter of Victorian households used a kerbside food and garden organics collection service, almost twice the number in 2018–2019.

Those councils already collecting food waste have been seeking to increase their collection from fortnightly to weekly. Monash, Boroondara, Glen Eira, Bayside and Kingston are all investigating moving to a weekly collection, according to the City of Monash.

Monash’s fortnightly collection is diverting only 20 per cent of food waste from landfill, well below its target of 75 per cent.

Fortnightly collections have discouraged some residents. Nearly all negative comments about FOGO relate to smells and pests because of food waste sitting in the bin for up to two weeks, the submission said.

Clifton Hill resident Zoe Alsop, who goes by Helga, wants to see the introduction of a FOGO service in the City of Yarra back in the budget and is scheduled to present a petition calling for FOGO implementation to the council at its meeting on Monday night.

Alsop said she was tired of having to put her food waste into landfill and concerned about throwing away leftovers that could be a resource.

“Not everybody has a garden, but everybody has food waste,” she said. “I was sad to see that the infrastructure was a possibility and then it was removed for a reason, that I didn’t understand.”