CORONAVIRUS deaths have increased 46 per cent in a week – but they accounted for just nine per cent of all fatalities in England and Wales.

New official figures show a total of 978 deaths registered in the week ending October 23 mentioned Covid-19 on the death certificate. 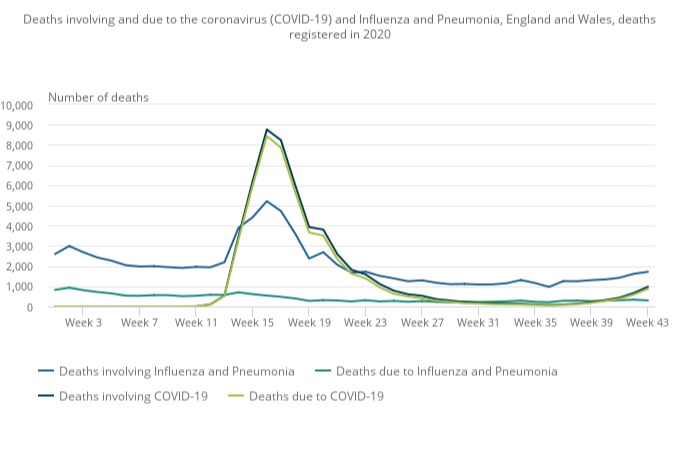 The Office for National Statistics (ONS) said it is the highest number of deaths involving Covid-19 since the week ending June 12.

The biggest increase was in those aged between 85 and 89, with those over 75 accounting for the highest number of Covid deaths at 72.6 per cent.

In England, deaths from coronavirus increased in all regions, with the North West the worst-hit with 325 fatalities in a week.

Of the 978 deaths involving Covid, 89.4 per cent had this recorded as the underlying cause of death.

While, the 1,719 deaths that involved influenza and pneumonia, 302 had the cause coded as its underlying cause. 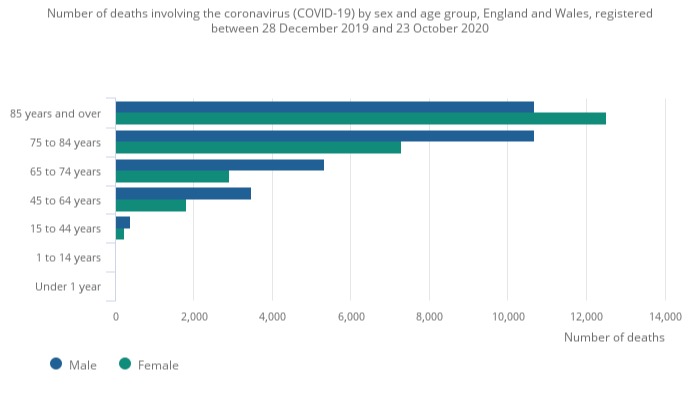 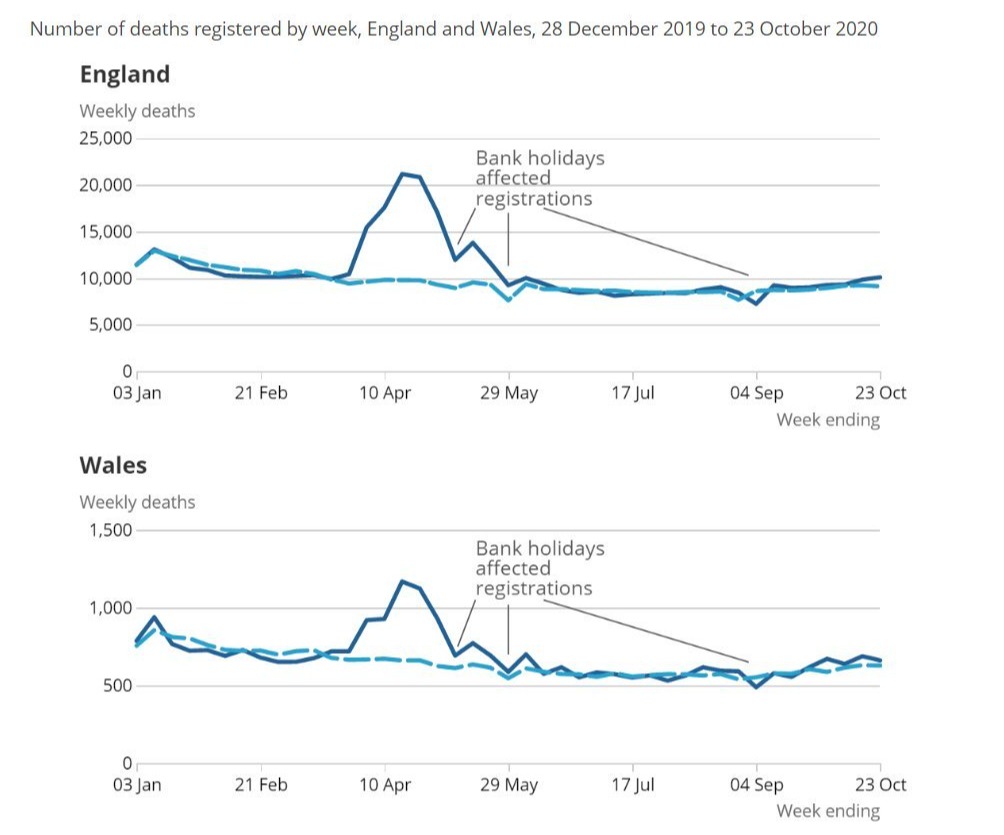 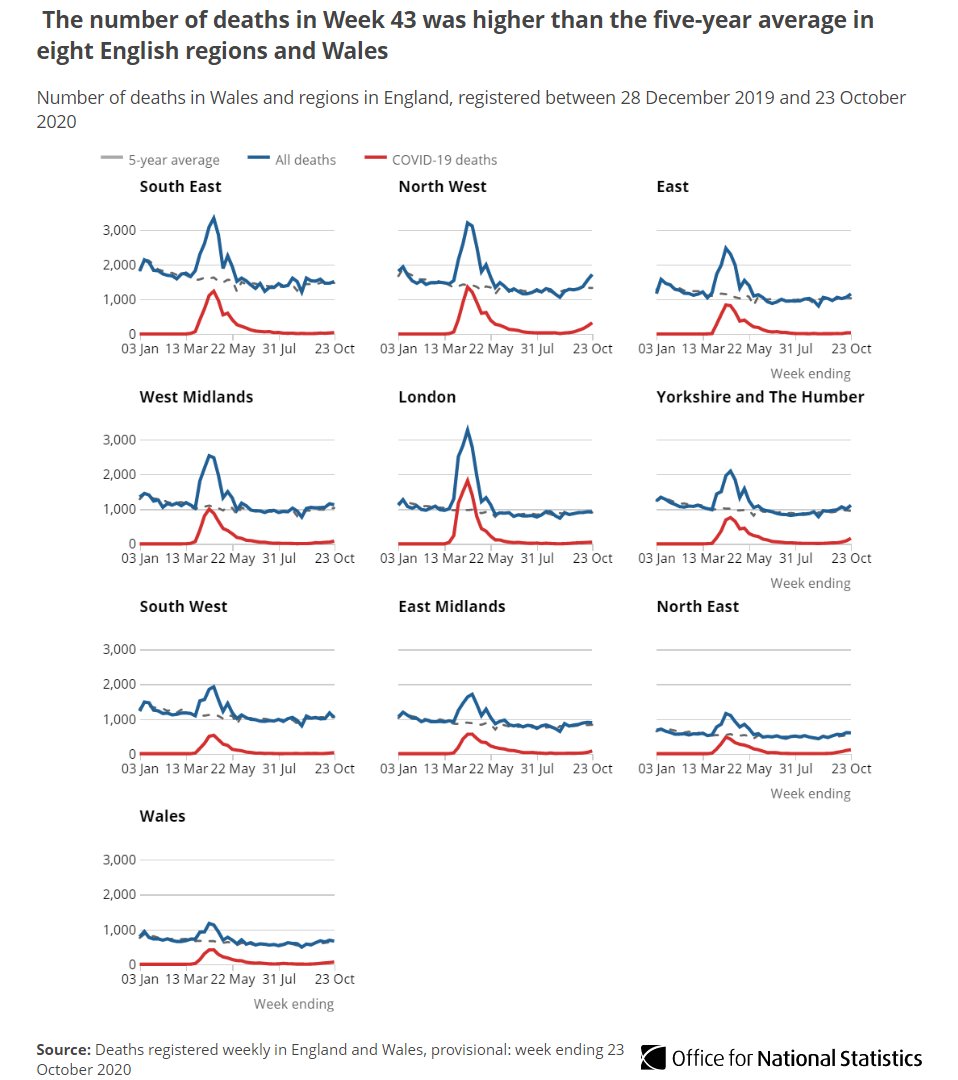 The ONS explains that it uses the terms “involving Covid-19” or “involving Influenza and Pneumonia” when referring to deaths that had that illness mentioned anywhere on the death certificate, whether as an underlying cause or not.

Deaths that involved both coronavirus and influenza and pneumonia have been included in both categories for consistency when comparing with the underlying cause of death, the statisticians added.

The figures also show that 10,739 deaths were registered in England and Wales in the week ending October 23, which was 10 per cent above the five-year average.

It was also 205 more fatalities than in the previous week. 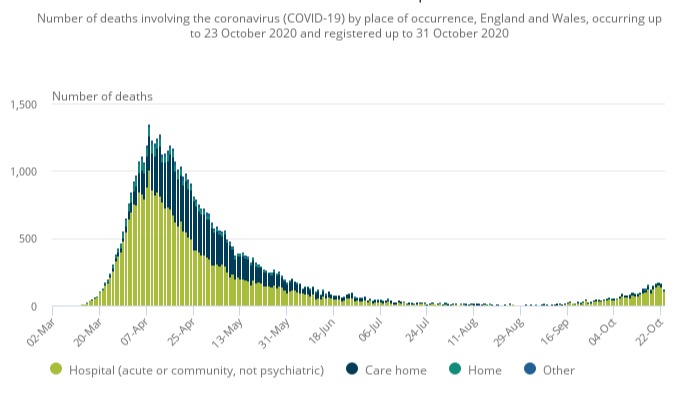 Across the UK, there were 12,292 deaths in the week ending October 23, which was 1,22 deaths higher than the five-year average and 364 more than the previous week.

Of these, 1,126 involved coronavirus which was 365 more than the previous week – a 48 per cent increase.

The ONS has developed an experimental statistical model to estimate how many deaths actually occurred in a given week, rather than the number registered.

It said: "Based on a statistical model that allows for the time taken for deaths to be registered, we estimate that the number of deaths actually occurring (rather than registered) in Week 43 in England and Wales was between 9,750 and 12,097."

It comes as England prepares to head into a second national lockdown on Thursday, which will end on December 2, when the Government is hoping to reintroduce a localised tiered system of restrictions.

Mr Johnson hopes that a mass testing campaign, using equipment which can deliver a result in a matter of minutes, could be a route out of the coronavirus crisis.

A pilot scheme in Liverpool will see half a million people offered regular testing from Friday, with 2,000 military personnel helping with the logistics.

The Prime Minister said that, depending on the success of rapid turnaround tests in the pilot, the aim is to distribute millions of them between now and Christmas to "empower local communities to use them to drive down transmission in their areas".

The Department of Health said further detail would be released by Liverpool City Council this week on how residents and workers will be able to access the tests, and did not give any more information on how regular the testing would be.

Mayor of Liverpool Joe Anderson said local leaders had made it clear to the Government that they are "keen that we should be considered for any new strategies to tackle the worrying rise in Covid-19".

The aim is to use new rapid turnaround tests – alongside existing swab tests, and Lamp (loop-mediated isothermal amplification) technology for NHS staff – to find asymptomatic cases in order to help prevent and reduce transmission in the community.

Mr Johnson said: "These tests will help identify the many thousands of people in the city who don't have symptoms but can still infect others without knowing.

"Dependent on their success in Liverpool, we will aim to distribute millions of these new rapid tests between now and Christmas and empower local communities to use them to drive down transmission in their areas.

"It is early days, but this kind of mass testing has the potential to be a powerful new weapon in our fight against Covid-19."

Mr Johnson was chairing a meeting of his Cabinet on Tuesday ahead of MPs voting on the lockdown measures on Wednesday.

Chief scientific adviser Sir Patrick Vallance and chief medical officer for England Professor Chris Whitty are due to face questions from MPs on Tuesday afternoon when they appear before the Science and Technology Committee.

The Government has extended the furlough scheme until December to coincide with England's lockdown.