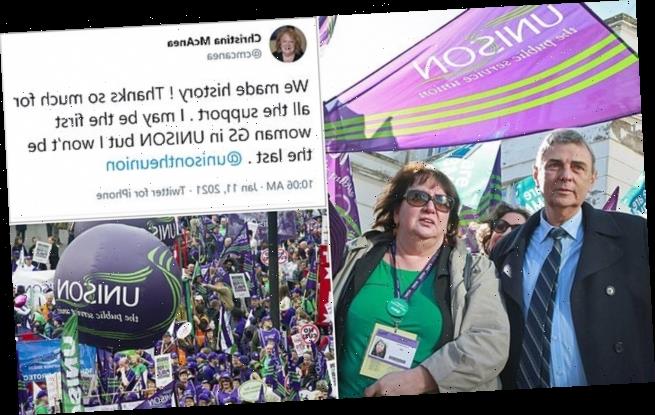 An official who has represented health and social care workers during the Covid-19 crisis has been elected as the first woman to lead the UK’s biggest trade union.

Christina McAnea succeeds Dave Prentis, who is retiring after 20 years as general secretary of Unison.

Mother-of-two Ms McAnea, who grew up on a council housing estate in Drumchapel, Glasgow, won almost half the votes in a ballot of members, beating three other candidates.

In 2015, Ms McAnea was one of the driving forces behind the first national health strike in England in 25 years.

The controversial action saw members of the military forced to step in when more than 400,000 NHS staff staged a four-hour walk out. 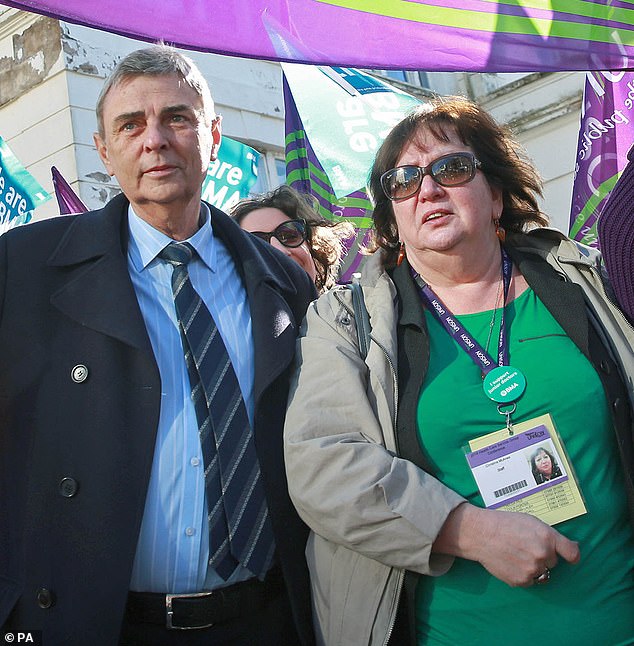 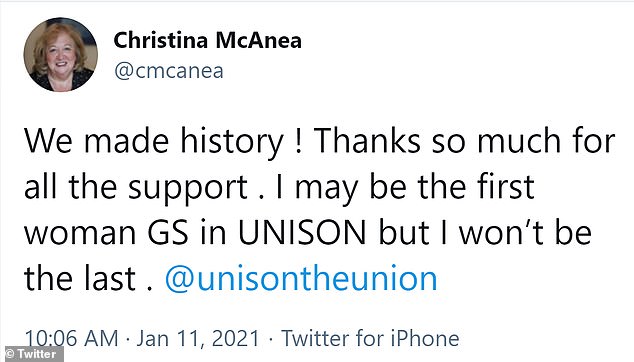 The mother-of-two tweeted followers to thank them for their support as she said, ‘We made history’

Christina McAnea grew up on a council housing estate in Drumchapel, Glasgow.

She left school at 16 and worked in the civil service, the NHS and retail before going to university aged 22 to read English and history.

From there, worked as a housing officer for Glasgow City Council, before moving to the GMB.

She has worked at UNISON since its formation in 1993, and became the lead negotiator in the first national health strike in England in 25 years.

The 2015 strike by members of the Royal College of Midwives marked the first walk out midwives and support staff since the union was founded during Queen Victoria’s reign in 1882.

She lives in South London with her husband, and has two adult children.

Ms McAnea left school at 16 and worked in the civil service, NHS and retail before going to university aged 22.

In her role as assistant general secretary at Unison, she has been responsible in recent years for collective bargaining, negotiations and equalities strategy, including health and safety, pensions and procurement.

Ms McAnea was the lead negotiator in the 2015 strike that saw some 400,000 nurses, midwives, paramedics, specialist health staff and hospital porters and cleaners stage a walk out from 7am for four hours.

The strike was in protest at the Government’s decision not to accept a recommended one per cent pay rise for all NHS staff, and involved workers from seven trade unions, including the Royal College of Midwives, which was taking action for the first time in its history.

Soldiers and police officers were called in to drive ambulances, taking the place of trained staff.

She said today: ‘I’m so grateful to everyone who voted for me and for the trust placed in me.

‘I become general secretary at the most challenging time in recent history – both for our country and our public services.

‘Health, care, council, police, energy, school, college and university staff have worked throughout the pandemic, and it’s their skill and dedication that will see us out the other side.

‘Their union will continue to speak up for them and do all it can to protect them in the difficult months ahead.

‘Despite the risks, the immense pressures and their sheer exhaustion, the dedication and commitment of our key workers knows no end.

‘I will not let this Government, nor any future one, forget that.

‘Supporting public service workers through the pandemic, securing an early pay rise for NHS staff and ensuring the Government backs down on its plans for an ill-judged pay freeze will be my immediate priorities.

‘Pushing for the funding and the political will to create a quality, affordable national care service, where staff are respected and paid fairly, comes close behind.’

Outgoing general secretary Mr Prentis said: ‘This is a historic day for our union, and I am delighted that Christina – a close friend and colleague for over 30 years – has today been elected as general secretary of our great union.

‘As an experienced and respected negotiator and passionate campaigner, I can think of no better person to pass the baton to and take our union forward.’