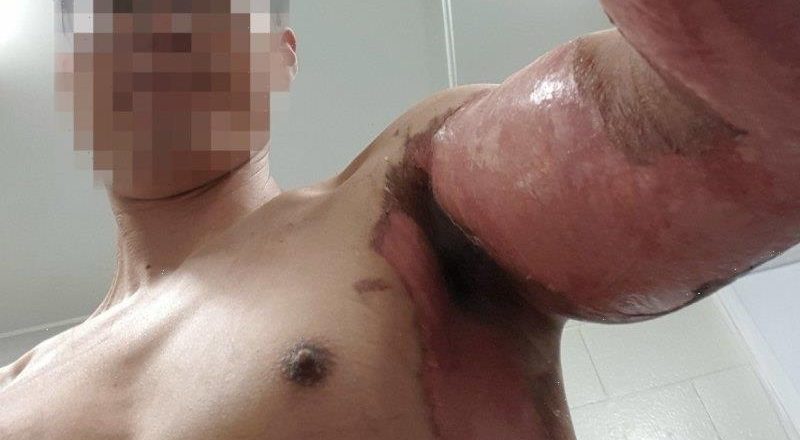 The abattoir clock had ticked into overtime when Chinese meatworker Wang pressed his foot on a button to lower a platform to better cut into a cow carcass. Instead of gliding down, the platform shuddered to a stop and caused a tank of near-boiling water to spill over him.

The next day, Wang turned up for work as usual: he did not want to disappoint his employer because soon he would become eligible for permanent residency in Australia. Months later, though, his body still in pain from the workplace accident, Wang found himself without a job anyway, his hope of a better life in Australia in ruins. 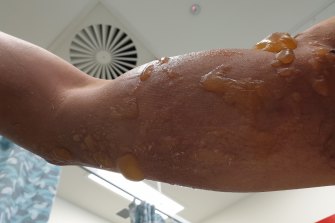 Wang was badly burnt in a workplace accident at a meatworks.

Wang is now back in China but is keen to speak out about his experience at Teys Australia’s Biloela abattoir in Queensland. He wants to tell Australians how vulnerable the migrant workers are who come to Australia to do jobs the rest of us shun.

“Such things happen to me but would not happen on local people. Why? Because we want to stay in Australia. We want to have the long-time [permanent] visa,” said Wang, who requested that his full name not be published.

“If you are Australian local people, you don’t have to worry about this. You have equal position with the factory [owner] like anyone else. We are poor people. We have no power when we talk with factory.”

An investigation by The Age and The Sydney Morning Herald into the Australian meat industry’s over-reliance on migrant workers and the recruitment networks that bring them here has uncovered shocking examples of mistreatment. 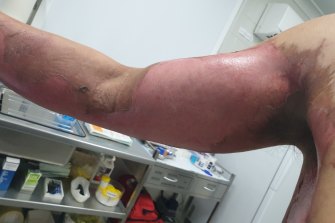 Wang’s arm after the blisters faded.

There was the Chinese meatworker at a Victorian abattoir who was not taken to hospital after being concussed at work last year, and an Argentinian at the same meatworks being forced to turn up for work before being vaccinated for Q fever – a sometimes deadly bacterial infection spread via airborne droplets from animals to humans. The Victorian Health Department recommends all abattoir workers be vaccinated before coming on site.

In NSW, a Taiwanese abattoir worker was last year ordered to return to work while he was still bleeding from the mouth from an injury so severe he would later need surgery. The worker was not paid sick leave.

At the Teys abattoir in Biloela where Wang worked, a Sri Lankan man also sustained water and chemical burns and, according to Wang, was also forced to return to work against medical advice. Months later he quit because of the pain, Wang said. 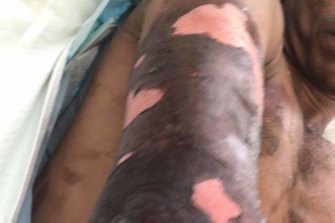 The injury to an unnamed Sri Lankan meatworker’s arm. He later lost his job.

Like hundreds of his countrymen, Wang was brought to Australia by a recruitment syndicate that enticed him with the promise of permanent residency. It would take three years to qualify, he was told. He was so confident he brought his wife with him.

Now officials from the Home Affairs Department are grilling hundreds of mostly Chinese abattoir workers about claims made in their visa applications amid fears some recruitment syndicates have been falsifying work experience and English language tests to meet Australia’s requirements for skilled migrants.

The scrutiny of the meatworkers and recruitment syndicates coincides with a promise by the Morrison government to introduce a new low-skill migrant agricultural worker visa, including for workers in abattoirs, to help deal with what primary producers say is a dire labour shortage. 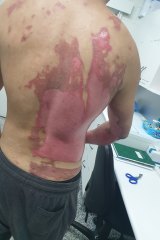 The burns to Wang’s back.

Privately, migrant abattoir workers from Victoria, NSW and Queensland, most of them Chinese, talk about how they borrowed money or sold possessions to pay recruitment syndicates $70,000 or more to secure a job in Australia after being promised it would lead to permanent residency.

According to Wang, many lie to get their visas because very few people in China with high levels of English would also have worked for three years as a boner or slaughterman – a requirement for a skilled visa.

When those lies are uncovered, individual workers fear they will be punished and forced back to China – a fear that makes them reluctant to speak out, take sick days or demand other rights.

“It is easier for the Australian government to say no to some workers’ visas than to do something against the company owners or the [recruitment] agents. They are big. We are small,” said one Chinese worker from a regional NSW abattoir.

The Victorian secretary of the Australasian Meat Industry Employees Union, Paul Conway, said it was time the public considered the working conditions of the migrant workers who ensured their supermarket shelves were stocked with meat. There were “elements of the meat processing industry that have become reliant on what really is modern-day slavery and exploitation,” he said.

When Wang was scalded in April 2019, he went to the emergency department at a nearby hospital for a few hours before being discharged. The doctor had told him he would need a few weeks off, but the abattoir called Wang in the following day and told him he could perform tasks in the office. Within days he was back in hospital in fear of infection as his burnt skin peeled away.

Once again, he was told he needed to rest, but soon a car arrived at his house to take him to work.

Wang said a senior manager told him he was not to see a doctor without a company representative. With his 457 visa nearing expiration and hopes high for permanent residency sponsorship, Wang felt powerless to object.

“Most people come to Australia for better life and long-time stay visa. I had no choice … I listen to him [his boss]. I come to factory every day and keep silent,” he said.

Months later Wang secretly went to see another doctor for knee pain. He paid for an MRI scan because migrant visa workers are not eligible for Medicare. Somehow, Wang says, Teys management found out.

“Within one week they fire me. The reason is I had a bad attitude.”

Wang enlisted law firm Maurice Blackburn and sued Teys Australia for unfair dismissal. The case was settled on a confidential basis. His recruitment agent was unable to find him a job elsewhere.

Teys executive chairman Brad Teys questioned Wang’s account, saying he was medically cleared to come back to work. “He got the shits and walked off the job twice. We let him go the second time,” he said.

Veteran Labor senator Kim Carr questioned the claims by many meat processors about being forced to rely on migrant workers because Australian-born people refuse to work in abattoirs.

“This is a question of proper wages and conditions,” Senator Carr said, highlighting abattoirs in Geelong and Warrigal that did not rely on foreign workers. “It’s the Chinese now but in the past it has been other ethnic groups. The common denominator here is exploitation.”

Back in China, Wang is looking for work. He has got fresh tattoos to cover his scarred skin.