Singapore: China says attempts by the United States and Australia to sabotage its security plans for the Pacific are doomed to fail, as Beijing’s top diplomat Wang Yi arrived in Kiribati to forge ahead with plans for Chinese-built infrastructure in the island nation.

As China and Australia go head-to-head in a diplomatic blitz of the Pacific,Wang accused the US and Australia of treating the region as their “backyard” and said China would help strengthen security cooperation in the region. The comments, after a meeting with Solomon Islands Foreign Minister Jeremiah Manele, followed interventions by Australian Foreign Minister Penny Wong and the US State Department on Thursday. 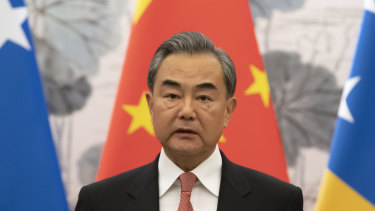 Chinese Foreign Minister Wang Yi at a ceremony marking the establishment of diplomatic relations between the Solomon Islands and China in 2019.Credit:AP

“Any smears and attacks on China-Solomon Islands normal security cooperation will be a dead end and any interference and sabotage will be doomed to failure,” Wang said in Honiara.

US officials continue to hold concerns about China’s plans for a two-kilometre runway on the tiny Kiribati island of Kanton halfway between the US and Asia. China’s Foreign Ministry says it has proposed upgrading and improving the airstrip – an ageing stop off on long-haul tourism flights across the Pacific. The Kiribati government maintains China has only provided funding for a feasibility study and any runway will be strictly for civilians. Kiribati’s foreign affairs secretary Michael Foon last week denied the country was in “discussions on a security agreement with any partner” after warnings from the US about a broader deal with China.

Kiribati has control over 3.5 million square kilometres of the Pacific and one of the world’s largest protected fishing areas. Like the Solomons, Kiribati switched its diplomatic allegiance from Taiwan to China in 2019. Taiwan claims Beijing made promises to Kiribati of planes, ferries and economic investment.

The details of Wang’s visit have been closely guarded but the Kiribati government made an exception to its strict COVID-19 border policy for the 20-strong Chinese entourage to arrive on Friday. All officials who meet with Wang during his four-hour visit will have to go into quarantine for a week.

Kiribati opposition leader Tessie Lambourne said on Wednesday she was “gravely concerned” about a security deal between Kiribati and Beijing that would give China access to Kanton Island and its marine zones.

“Our rich marine territory in the Phoenix Islands Protected Area (PIPA) will be under China’s control for sure,” she told 1News in New Zealand.

Washington and Canberra have been lobbying other Pacific nations against signing up to a proposed 10-country Solomons-style trade and security pact with China that could shift the balance of power in the region and see Beijing establish a strategic foothold between Australia, Asia and the United States.

On Friday, China’s ambitions were dealt a blow after Fiji, the region’s largest economy and most significant diplomatic player, announced it would join a US-led Indo-Pacific framework. The framework, which to date is more symbolic than practical, is designed to counter China’s “Common Development Vision,” which offers countries security training and free trade networks in exchange for Chinese-led development.

US National Security Advisor Jake Sullivan said Fiji had joined the framework because “across geography, we are united in our commitment to a free, open, and prosperous Indo-Pacific region”.

The Fiji announcement came as Australian Foreign Minister Penny Wong met with Prime Minister Frank Bainimarama on Friday in Suva. Wong denied her trip to the Pacific had anything to do with Wang’s visit to the region. The Chinese Foreign Minister is scheduled to attend a meeting in Fiji on May 30 where China’s proposed development plan will be debated.

“I was very keen to come to the Pacific as soon as I became Foreign Minister,” she said. “It’s for Pacific nations to make their own decisions about who they want to partner with and in which areas.

“We want to be a partner of choice. We want to demonstrate to your nation and other nations of the region that we are a partner who can be trusted, who can be reliable – and historically, we have been.”

Wong said Australia had expressed its concerns publicly about the security agreement between Solomon Islands and China because, like other Pacific nations, “we think there are consequences, we think it is important that the security of the region is determined by the region”.

Wang rejected that criticism. “The framework agreement aims to…support Solomon Islands to better safeguard its social security while also protecting the safety of Chinese citizens and institutions in Solomon Islands,” he said.

“[This is] reasonable and legitimate with everything being operated in an open and transparent manner.”

US Secretary of State Antony Blinken said on Friday that competition between China, the US and its allies would continue to escalate, but Washington was not looking for conflict or a new Cold War.

“China is the only country with both the intent to reshape the international order and, increasingly, the economic, diplomatic, military, and technological power to do it,” he said.