While he doesn’t expect the date of Australia Day to change any time soon, Les Daniels can sense something stirring in the Australian population.

After performing a traditional smoking ceremony with fellow members of the Koomurri Aboriginal dance troupe at dawn on Wednesday, Mr Daniels said he detected a growing recognition of the importance of Aboriginal history and culture among non-Indigenous Australians.

Without downplaying the atrocities of the past and difficulties of the present, it gives him hope for the future. 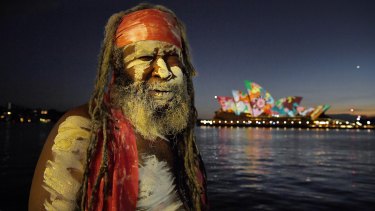 Koomurri performer Les Daniels in front of a projection of artwork by Pitjanjara artist David Miller on the sails of the Opera House on Australia Day.Credit:Kate Geraghty

“People are starting to have more awareness of being on Aboriginal country,” Mr Daniels said.

“It is really good to see that change is coming.”

As the Koomurri dancers held their WugulOra – or “one mob” – ceremony at Barangaroo, the sails of the Opera House sails lit up with a spectacular artwork by Pitjantjatjara artist David Miller depicting the giant perentie lizard that prowls the desert in central Australia.

It was the second consecutive year in which a painting by a distinguished Aboriginal artist was projected onto the nation’s most famous building to mark the start of Australia Day.

Mr Daniels regards January 26 as a day of invasion and genocide, a view shared by the crowd that gathered later in the morning at the steps of Town Hall steps for an Invasion Day rally and march.

NSW Police estimated that 4000 people participated in the march, which proceeded peacefully through the city centre before ending at Victoria Park next to the University of Sydney’s Camperdown campus. 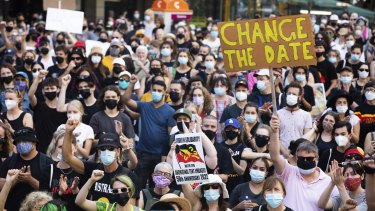 Event organiser Clayton Simpson-Pitt, of the NSW Aboriginal Land Rights Association, said he did not expect such a high turnout given continuing concerns about the coronavirus.

“Five years ago you would never have seen this many people show up,” he said. “It’s a testament to the support we have in the community.”

The rally crowd was noticeably diverse, ranging from young Muslim women in headscarves to older white Australians and Indigenous Australians of all ages.

“We look forward to the day Australia Day is no more.” 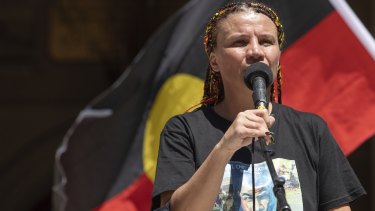 Elise Cooke, 23, a ceramic artist from Sydney’s northern beaches, said differences in opinion about how to mark Australia Day had caused tension in her friendship circle.

“I have friends who know the history but don’t regard it as a genocide,” Ms Cooke, who is non-Indigenous, said. “I see that as arrogant and ignorant.”

She marched at the Invasion Day rally alongside friends holding a sign reading: “Put down ya beer, pick up a banner.”

“It doesn’t feel right in my soul to celebrate today,” she said. “We’re celebrating deaths, the loss of language, the loss of culture. I don’t understand how anyone could feel happy having a beer and a barbeque today.”

“I’m ashamed of the way Indigenous people have been treated,” she said. “This day should be changed.”

Several speakers at the event highlighted the stubbornly high rates of incarceration for Indigenous Australians and the fact 500 Indigenous people have died in custody since the Royal Commission into Aboriginal Deaths in Custody 30 years ago.

Others demanded the creation of a truth and justice commission to document the historical mistreatment of Indigenous people since the founding of NSW.

“I wake up with tears running down my eyes thinking about the generational trauma that continues. It’s not a day to celebrate: not now, not today, not ever.”

Mr Silva is the nephew of Aboriginal man David Dungay Junior who died in custody in 2015 after police stormed his cell when the diabetic refused to eat a packet of biscuits.

Chris McCaughey said he had brought his 5-year-old daughter Alex, who is Korean-Australian, to the protest to inform her about Indigenous history.

“I hope my daughters grow up in a country where first nations people have the justice they deserve,” he said.