Calais Jungle is home to hundreds who have already been told they CANNOT stay in EU – as 70% of migrants who sail into Europe from Libya do not qualify for asylum, reveals UN report

The Calais Jungle migrant camp is filled with hundreds who have already been told they cannot stay in the EU, it has been claimed.

Tony Smith, the former director general of the Border Force, has said that officials are seeing the ‘same faces’ among those attempting to make the crossing from Calais to the UK.

It comes as it was revealed that the majority of migrants using one of the most common sea routes into Europe are not in need of ‘international protection’, according to a UN report.

The United Nations High Commissioner for Refugees found that more than 70 per cent of migrants crossing from Libya to Europe are unlikely to qualify for asylum when they arrive.

Vincent Cochetel, the UNHCR special envoy for the region, also admitted that a ‘fair and equitable return mechanism’ must be put in place. 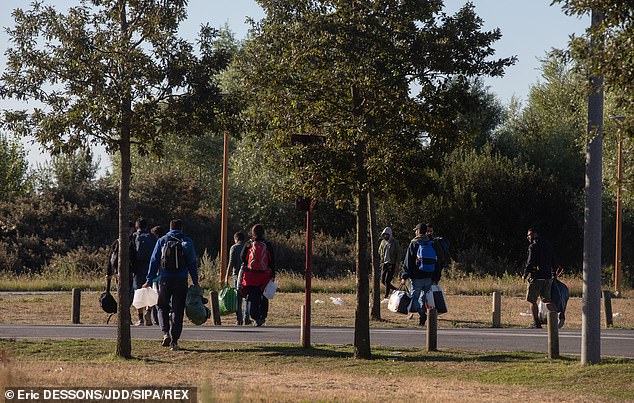 The former director general of the Border Force, has said that officials are seeing the ‘same faces’ among those attempting to make the crossing from Calais to the UK 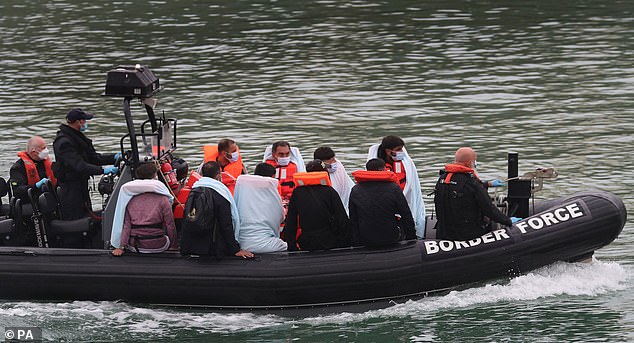 If it is not, then ‘the entire asylum system will be called into question’.

According to the UNHCR report, migrants who travelled from Libya to Italy and Malta made up 68 per cent of arrivals to Europe via the Central Mediterranean between January and May.

Around 8,600 people have departed from the North African country by sea, with Bangladeshis, Sudanese and Somalis the most common nationalities making the crossing.

The report reads: ‘As of the end of May, an estimated 28% of the people who had crossed the sea from Libya are likely to be in need of international protection.’

The vast majority of those attempting to reach Britain from Calais have travelled over land through the EU, experts say.

The news comes amid an increase in migrant crossings in the UK, with a record number attempting to come over in small boats from Calais.

Former Border Force director general Tony Smith told the Telegraph: ‘A lot of people who are in Calais have already been told that they cannot stay in the EU, some of them have been refused in a couple of different countries, but they don’t want to go back.

‘The French can’t remove them so they are just their names and details and telling them to stop trying to break the law.’ 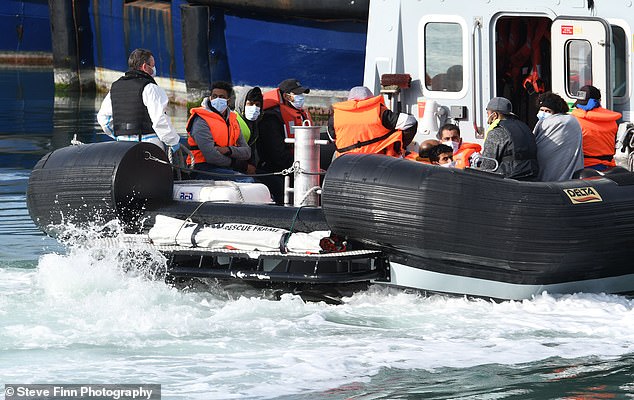 The news comes amid an increase in migrant crossings in the UK, with a record number attempting to come over in small boats from Calais 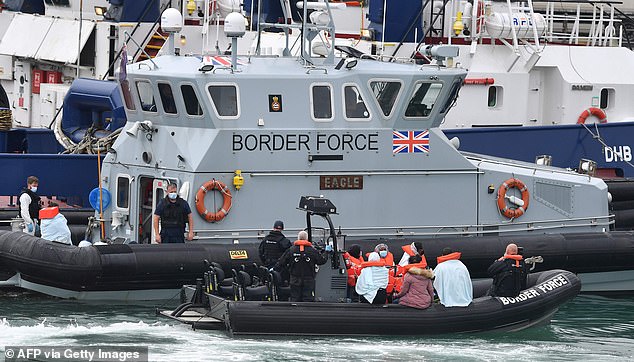 Hundreds of migrants have been landing on the Kent coast in recent weeks as warm weather and calm sea conditions encouraged them over from France. Pictured, UK border force officials with migrants on August 15

He said that smugglers have the ‘upper hand’ and it will encourage more people to travel to northern France to ‘try their luck’ as the smugglers have found ‘a gap in our defences’.

He also insisted migrants crossings were an international issue and called on assistance and action from the French.

He added: ‘We must put the smugglers out of business. These are busy shipping lanes, the boats could get run over by a ferry without even knowing it, and babies drowning in the Channel is not what anyone wants to see.

‘There is a real reason for stopping this no matter what your opinion on asylum is, this is a matter of life of death. These are human beings and these organised criminal gangs do not care if they survive or not.’ 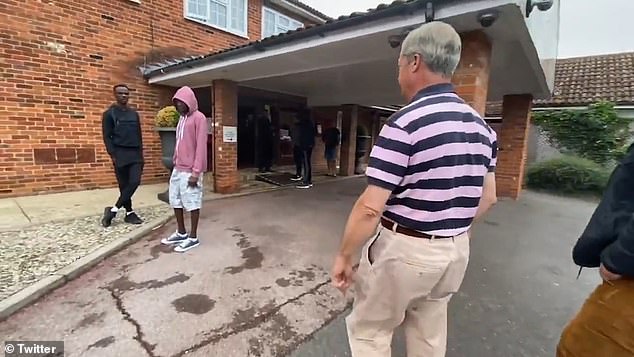 More than 5,000 migrants have crossed the Channel this year, with August’s total of more than 1,200 so far making it the busiest month on record.

Hundreds of migrants have been landing on the Kent coast in recent weeks as warm weather and calm sea conditions encouraged them to travel in small boats from France.

A migrant was attacked on a Kent beach just moments after landing onshore in a dinghy on Sunday.

The man, thought to be in his 20s and from the Middle East, was set upon by an unknown assailant who watched the boat arrive on the beach near Deal.

It is thought to be the first assault on a migrant arriving on the Kent coast.

Police said the victim was not injured but a search for the attacker has begun, according to The Times.

Natalie Elphicke, the Conservative MP for Dover & Deal, condemned the attack. ‘While urgent action is needed by the French and the Home Office, there is no excuse for violence or vigilante behaviour,’ she said.

In a Zoom call with backbenchers Ms Patel (pictured in Dover last week) suggested that the system was being ‘exploited by leftie Labour-supporting lawyers’ who were doing everything they could to stop the Government removing people.

Police were called at around 11.05am on Sunday after the attack in Kingsdown near Deal in Kent.

On Monday a five-year-old girl was among 17 migrants to arrive in Dover on the 14th consecutive day of Channel crossings as it was revealed smugglers offer ‘gold, silver and bronze’ packages to desperate passengers.

The previous day 112 migrants arrived at Kent’s shores, bringing the total for this month so far up to at least 1,232 – smashing July’s record 1,118 arrivals.

Traffickers take advantage of vulnerable asylum seekers desperately fleeing their homelands by offering the paid-for arrangement at a camp in Calais.

The most expensive package, gold, costs £10,000 and means you get a larger boat with better conditions, less other people and lifejackets, as reported by The Sun.

One migrant who was hoping to make the journey in the next few days told the newspaper: ‘The prices vary. It depends on the size of the boat and how many people are inside.

‘People come around offering the crossings. We pay and keep in touch. They tell us when and where to go and pick us up.

‘I’m looking forward to it. Britain is like heaven to me!’ 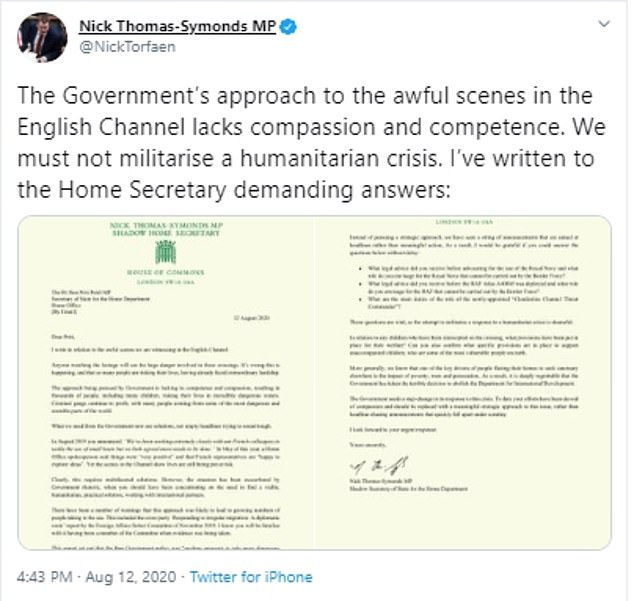 The silver package costs between £3,000 and £5,000, and means you get a worse boat. And the lowest package, bronze, means you pay a prize of £1,000 or less and are often crammed onto a stolen boat.

Roger Gough, the leader of Kent county council, said on Sunday that more unaccompanied migrant children arriving over the weekend had ‘tipped the balance’ in the area.

Large numbers of migrant children reaching the UK led to an ‘unthinkable’ situation where the council said it ‘cannot safely accommodate any more new arrivals’.

The Home Office has booked 4,000 hotel rooms for asylum seekers amid pressure from a surge of cross-Channel migration and the coronavirus pandemic.

Hotels in Hull, Birmingham, Nottingham, Southport and Glasgow have been used amid a shortage of permanent accommodation for newcomers to live while their asylum claims are assessed.

Companies who provide accommodation for migrants had also been permitted to find rooms in places that were not part of the scheme that oversees where the newcomers are dispersed across Britain.

Priti Patel previously warned France the UK will not cough up millions of pounds for anti-migrant patrols unless it agrees to take back more refugees as she prepares sweeping changes to the ‘broken’ immigration system.

The Home Secretary told Tory MPs that she was preparing sweeping legal changes that would ‘send the left into meltdown’.

In a Zoom call with hardline backbenchers she suggested that the system was being ‘exploited by leftie Labour-supporting lawyers’ who were doing everything they could to stop the Government removing people.

And she said that France’s demand for £30million to fund Channel patrols and surveillance would be dependent on it taking in more of those seeking to get to the UK, the Times reported.

The Government has asked for military assistance, which so far has taken the form of two RAF planes, but proposals to send armed forces to the English Channel to deal with small boat crossings have come under fire from France.

Calais mayor Natacha Bouchart said sending the Royal Navy into the English Channel to deal with migrant crossings is a ‘declaration of maritime war’.

And Labour shadow home secretary Nick Thomas-Symonds insisted that ministers must provide solutions rather than ’empty headlines’ in order to tackle the issue.

‘Caricaturing an entire profession, which is subject to a code of conduct and upholds the rule of law, is dangerous and unbecoming of a serious Home Secretary.’ 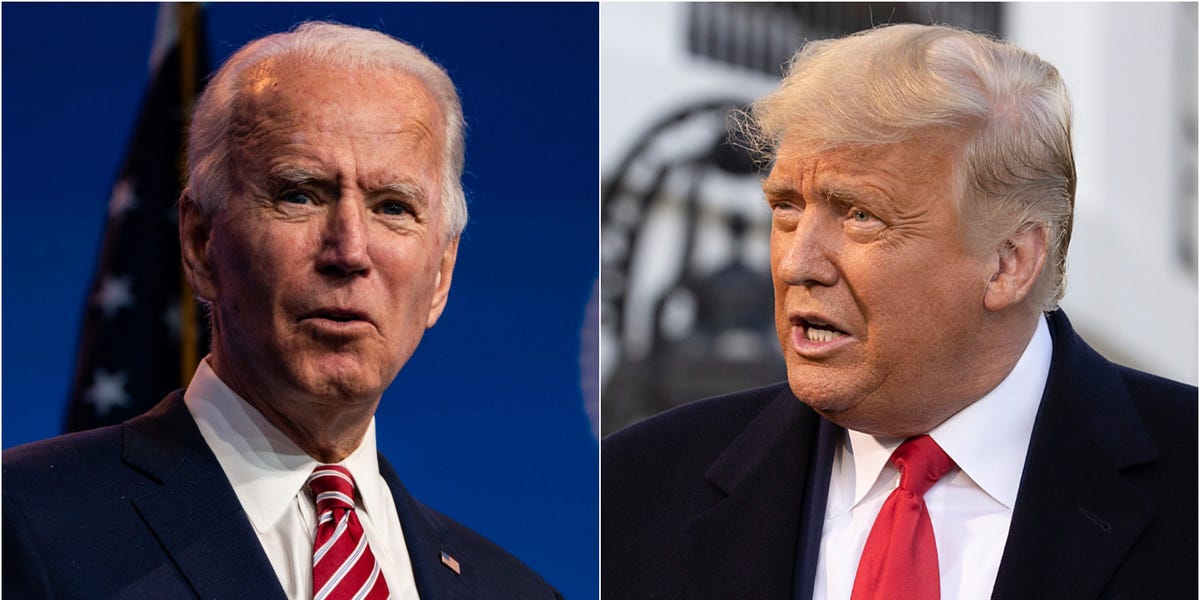