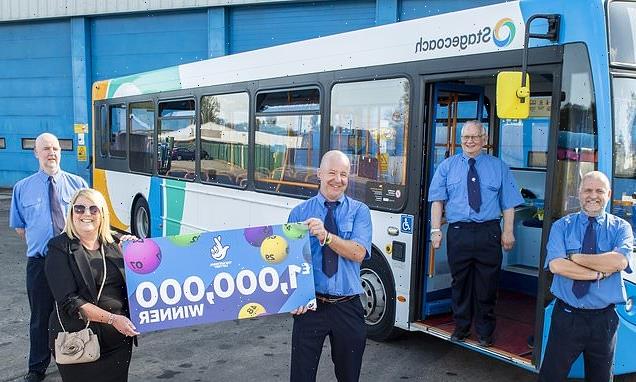 Nine bus drivers insist the love of the job will keep them from retiring despite the fact they split a £1 million lottery win.

The Carlisle-based Stagecoach lottery syndicate, named Plan B, will each pocket £100,000 after hitting the EuroMillions jackpot – but they have vowed to continue in their jobs.

The syndicate, whose ages range from 30 to 65, each have their own plans for their winnings – including forking out on camper vans to make the most of the Great British summer.

Father of three Kevin Davidson, 50, said treating his family is top of his shopping list.

‘This is a life-changing sum of money for every single one of us and we all have different plans.

‘Some of the syndicate initially thought they may retire – but then decided against it.’ 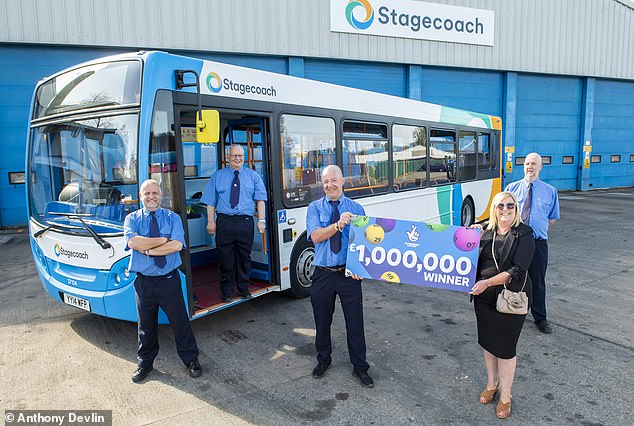 Kevin, who has driven buses for 16 years, admitted the group love their jobs so much that some returned to work the the same day they were declared lottery winners.

He continue: ‘None of us would dream of cancelling our shifts. We think too much of our customers to do that and would never want to let anyone down.’

‘This money will significantly change my life and just enable me to live more comfortably.

‘It takes any financial worries away.’

The Plan B syndicate, named because no-one could think of a different name, started eight years ago and have notched up smaller wins that normally go towards Christmas spending money. 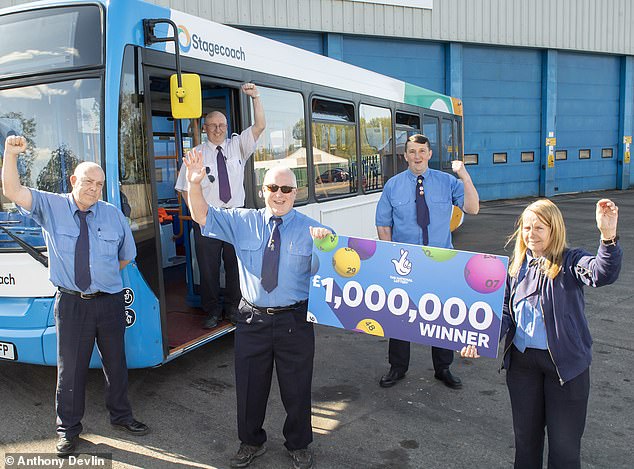 He said: ‘This way, if I ever forgot to buy a ticket I know we would be safe!’

Kevin recalled the day after the draw, on April 17, that he noticed three missed calls on his phone from David.

He explained: ‘We have a group chat and my phone just started to ping and I noticed I also had three missed calls.

‘I called David back and he just said, Kevin I need you to check our ticket I think we may have won and won big.

‘He sent me a photograph of the ticket to my phone and I was actually quite calm at this point and checked the ticket carefully.

‘When I realised we had won I couldn’t quite believe it.

‘You always hear of people winning The National Lottery but you just think it will never happen to you.

‘Everyone was just totally shocked that something as amazing as this had happened to us!’

And Kevin says the syndicate has no plans to stop now and already has their EuroMillions ticket in his back pocket for this Friday’s draw.

Who is the biggest ever UK lottery winner? Two couples and a former car mechanic top list

The couple, who have been married for 30 years, said they were ‘not scared’ of the wealth because they were going to have ‘so much fun’ with the money.

The pair, a retired TV cameraman and a retired psychiatric nurse, from Largs, in Ayrshire, said their children Carly, a photography student, and Jamie, a call centre worker, would be bought their own homes and cars.

The family made a £1million donation to the SNP shortly after winning.

The marriage ended just 15 months into their new jackpot winning lives, citing the stress of the money as the reason they needed to split.

At the time, a spokesman for Mrs Bayford said: ‘Gillian Bayford confirms that her marriage to Adrian has broken down irretrievably and they have separated.’

It came after Mrs Bayford was forced to deny she had an affair with the couple’s gardener, Chris Tovey.

Adrian and Gillian Bayford, from Suffolk, took home more than £148 million in August 2012

5. An unnamed ticket-holder claimed just over £113million in October 2010, and chose not go public.

Neighbours in Croydon described he and partner Nicky Ottaway moved out ‘almost overnight’ after they scooped the EuroMillions jackpot last March.

Mr Trotter admitted at the time that he was like his namesake, Del Boy Trotter from Only Fools And Horses.

7. Steve Thomson and his wife Lenka, from West Sussex, became the UK’s biggest EuroMillions winners when they claimed a prize worth £105million in November 2019.

8. A couple from Cambridgeshire, Dave and Angela Dawes, won more than £101million on their third go on the EuroMillions draw in October 2011.

Mr Dawes said he ‘didn’t sleep a wink’ the night of the win, as it was too late to call Camelot after the couple checked their numbers.

Last year, the couple were taken to court by his son, an Afghanistan veteran, Michael Dawes, 32, who said he was ‘ungenerous in spirit’.

But a judge ruled the millionaire father does not need to keep bailing out his son, who burnt through £1.6million in two years, and came back for more, failing to heed his stepmother’s advice to stop eating at the Ritz and go to McDonald’s instead.

10. The Davies from Wales family won £61million on the EuroMillions in 2016

Stephanie Davies, 23 is said to have ‘reluctantly’ purchased the ticket at the time after her mother Sonia called her from Florida begging her to go out and buy one.

Keith Reynolds, Sonia Davies, Stephanie, Courtney Davies and Steve Powell all scooped money on the jackpot and said they were the ‘luckiest people’ on the planet to have won.