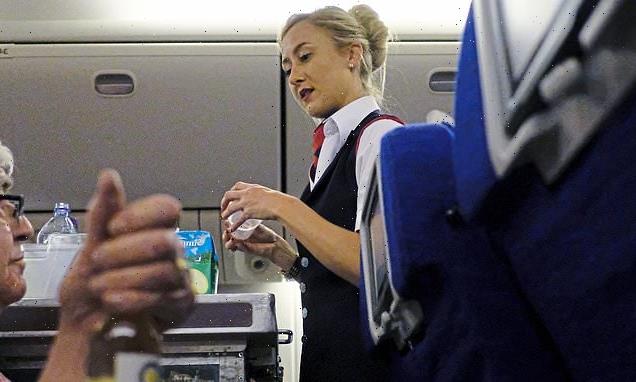 Save our G&Ts! British Airways sparks fury by axeing the drinks trolley and making passengers order on an app

For many, being handed a glass of bubbly or a G&T at 30,000ft is when a holiday really starts. But traditional in-flight service could soon be a thing of the past following a move by British Airways.

Instead of air hostesses wheeling trolleys along the aisle, short-haul economy-class flyers with BA must now pre-order or use an app – similar to those in Wetherspoon pubs – if they want a drink.

BA, which once billed itself as the world’s favourite airline, insists the move is to cut down on aircraft weight and food waste.

But critics say the lack of personal touch is another example of the nation’s flag carrier running down its services. 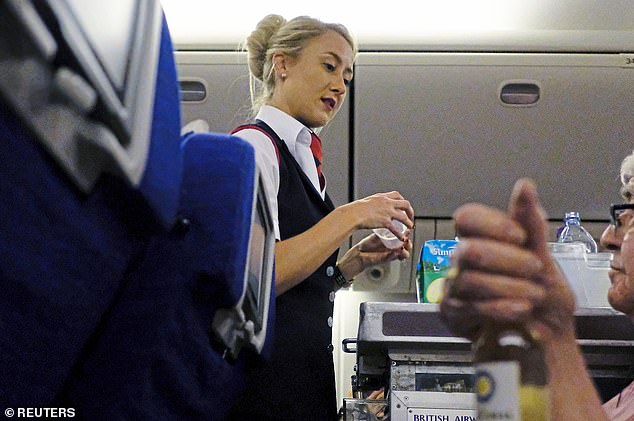 Thing of the past? A British Airways cabin crew member serves alcohol and snacks to passengers. Instead of air hostesses wheeling trolleys along the aisle, short-haul economy-class flyers with BA must now pre-order or use an app if they want a drink

Former BA stewardess Amanda Epe, who wrote a book about her experiences in the sky, told The Mail on Sunday: ‘You can never replace people with apps, and that’s why we call it service – because of the human touch.

‘With all the profit in the airline industry, it’s not right to do this. They seem to be ditching tradition for no good reason.’

In May, The Mail on Sunday revealed how BA executives were moving upmarket again after the pandemic.

At the time, Tom Stevens, BA’s director of brand and customer experience, said: ‘From booking until landing, BA needs to feel like a premium experience.’

Part of the revamp was the Buy Before You Fly scheme, where drinks and food could be ordered from home up to five days before travel. Duty-free and other online shopping could also be done in advance. 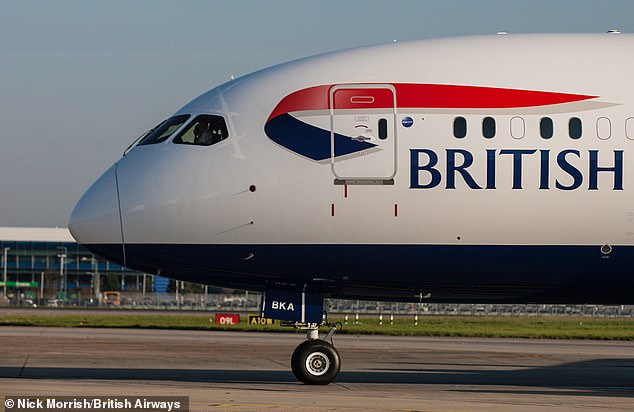 In May, The Mail on Sunday revealed how BA executives were moving upmarket again after the pandemic. Pictured: file photo of a BA Boeing 787-9 arriving at London’s Heathrow Airport

Was there ever a more refreshing, delicious taste on the tongue than that of the first drink of the holiday, sipped from a misted, chilled glass, safely aboard a smooth, swift British Airways jet bound for a well-earned break from normality?

The glamour of flying may mostly have departed, but our beloved BA has managed to uphold a few of its pleasures in an era of cheap, bare, basic travel. And thank goodness for that. So please let it not be true that the national flag carrier is getting rid of trolley service on shorter flights, and passengers must instead grapple with yet another miserable smartphone app, just to get a gin and tonic or a glass of wine.

The days may yet be coming when a holiday flight abroad has all the joy of a crowded bus ride on a wet Monday morning. But please, not yet, and especially not on British Airways.

BA said not having so much stock would reduce the weight of the plane, so it would burn less fuel. But passengers now having to use a smartphone app to order from their seat, via the aircraft’s wi-fi system, are not impressed.

Passenger Hellen Madden wrote on Twitter: ‘BA, can you explain why there is no on-board trolley service on this three-hour flight to Greece?’

Another commented: ‘In the 1960s, the air stewards used to carve roast beef for you – now you can’t even get a glass of wine without a kerfuffle.’

Since January, BA has been giving passengers a bottle of water and a snack, typically a packet of crisps or a biscuit.

But a woman who flew BA with her family to Portugal this month said they had been given a bottle of ‘lukewarm mineral water and a packet of foul-tasting crisps’, yet had been able to buy a gin and tonic and packet of shortbread from a trolley on the easyJet flight back to Britain.

‘I never imagined that the service on a budget airline would trounce that on BA, but it most certainly did,’ said the mother-of-two. ‘BA’s boast of being the world’s favourite airline now seems pretty hollow.’

A trolley service is still available on long-haul flights – but they are seldom taken in Covid times.

There have been grumbles about cramped business-class cabins and dog-eared interiors while complaints soared in 2017 when BA axed free food and drinks on short-haul economy flights.

Mr Stevens said: ‘The feedback we have had from customers who have been able to travel and have ordered from our new Speedbird Cafe [app] has been extremely encouraging.’