Boris's Great Escape: PM packs up tent to go back to work

Boris’s Great Escape: PM flees tent at The Old School House on remote midge-infested Highlands peninsula where reality TV show was filmed – but is he going back to No10 to FINALLY face the music over exams crisis?

Prime Minister Boris Johnson’s Great Escape was believed to have ended today after he fled his tent to leave the midge-infested Scottish peninsula where he holidayed through his government’s exam debacle.

The PM is understood to have left the designer bell tent he had been staying in with Carrie Symonds, their dog Dilyn and new baby Wilfred to go home.

It is 620 miles away from Downing Street so could have been a long drive to return back to work.

The area has been swamped with midges in recent days, with one camper witnessing a swarm of millions in the air.

The Old School House, Mr Johnson’s £1,500-a-week three-bed property with private grounds. is on the Applecross Peninsular, which has a population of just 452, and was the location of the 2009 BBC 2 reality show Monty Halls’ Great Escape.

It is said the PM and his fiancée spent much of the break in the tent, which was set up just 50 yards from the scenic rental home. 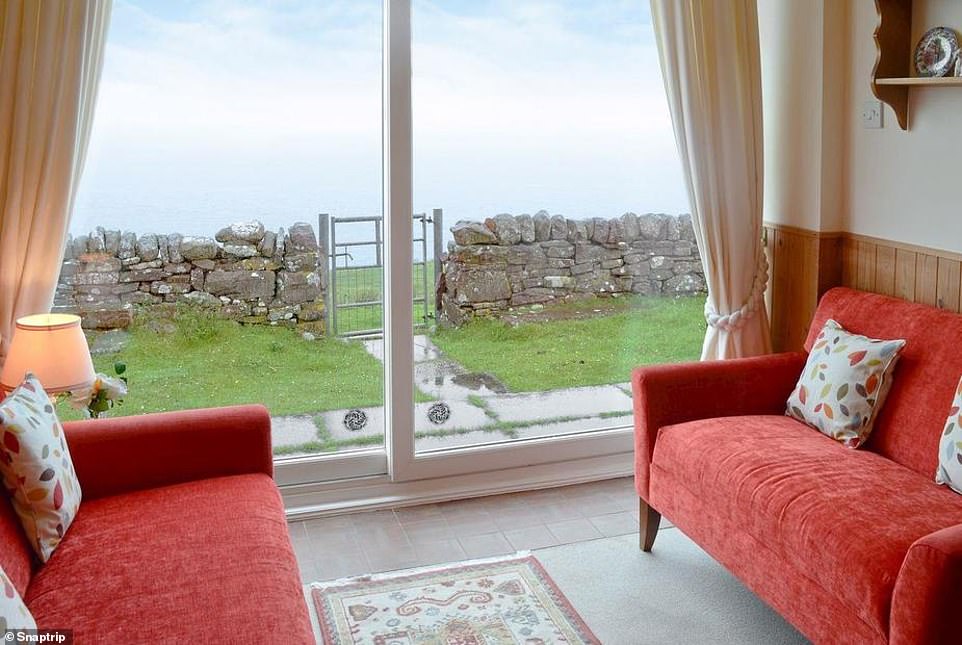 The living room of the property boasts incredible views towards the picturesque islands of Raasay, Rona and Skye 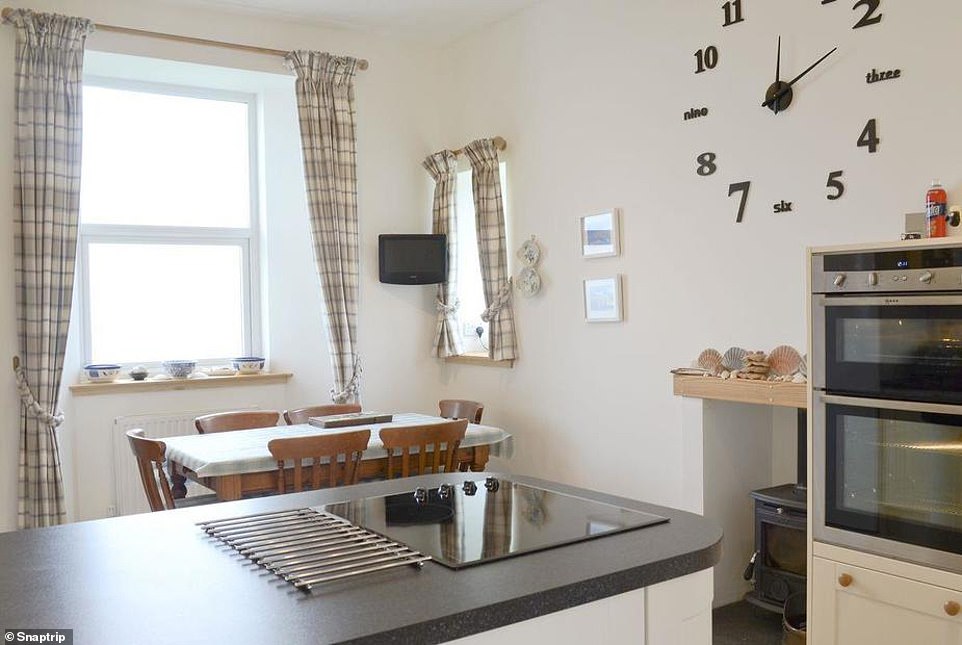 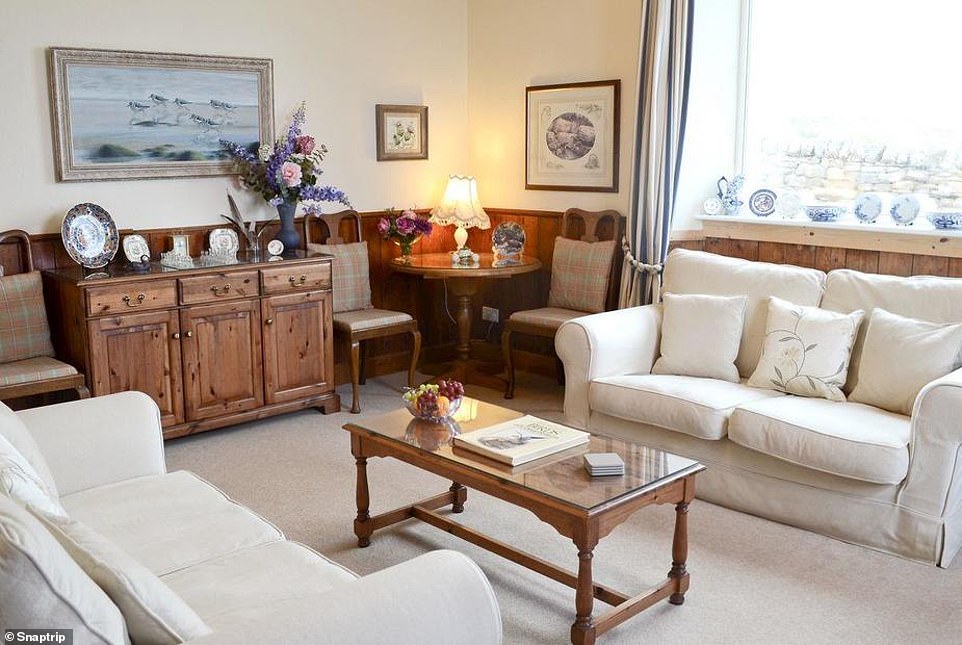 The living room has a plethora of sofas and a smart wooden table and sideboard, featuring plates from the local area’s past 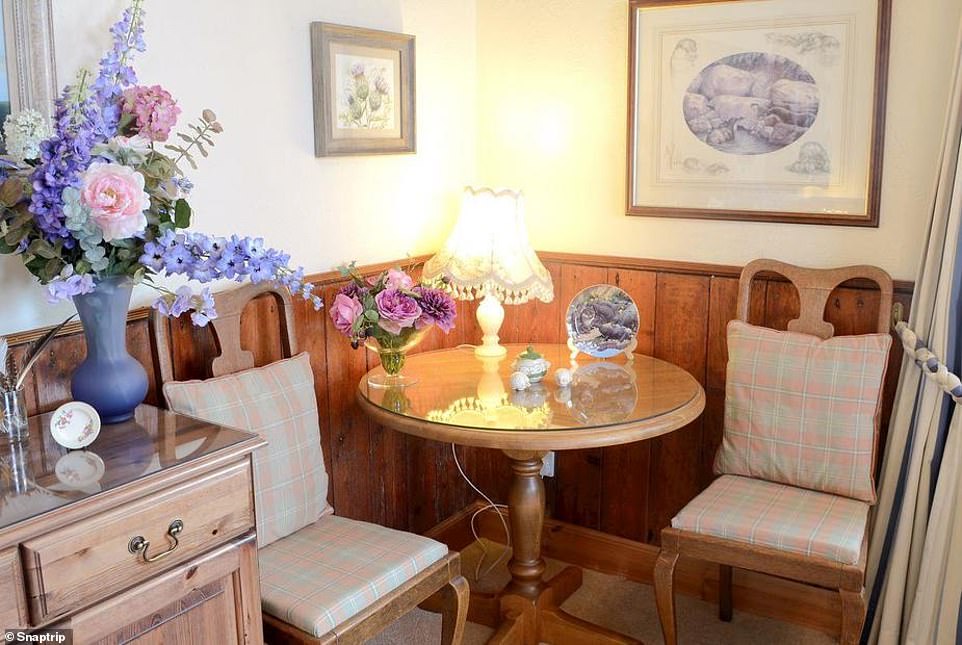 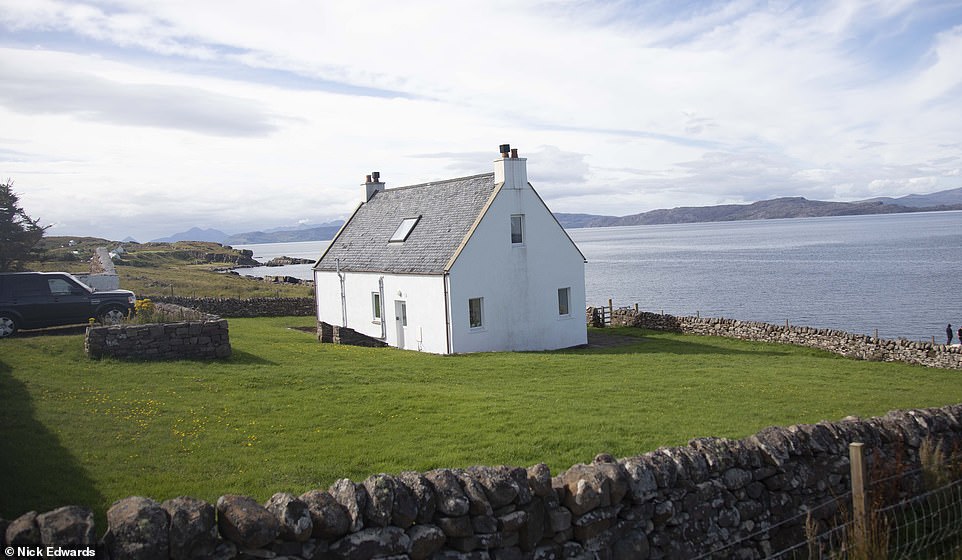 Boris Johnson’s Highlands hideaway: The Old School House on the Soottish peninsula of Applecross, where the PM has been staying this week while leaving his ministers to face the music of the A-level and GCSE exams debacle 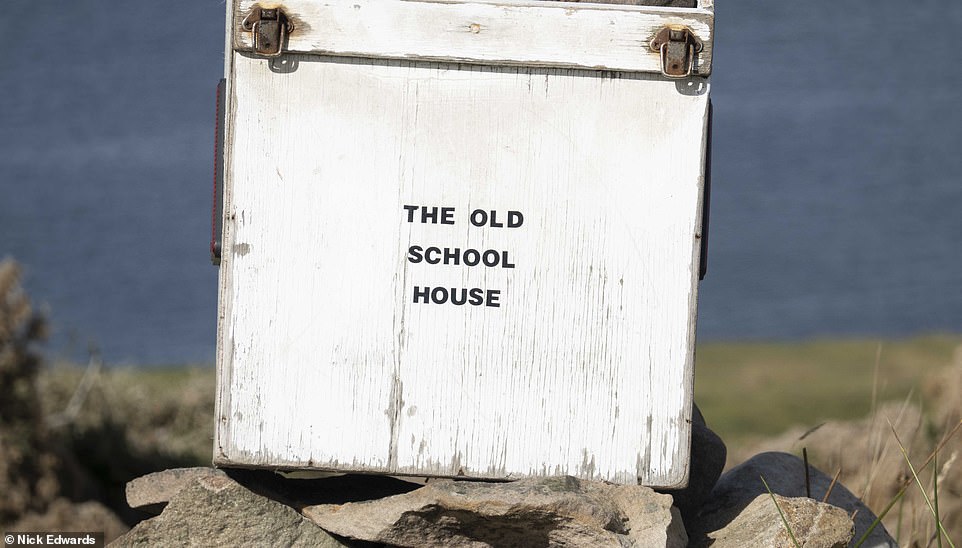 Field trip: Boris Johnson’s stay at ‘The Old School House’ in Scotland coincided with chaos for thousands of A-level and GCSE students whose grades were automatically downgraded by the government’s algorithm then reassed after a U-turn

The PM would seem likely to approve of how seriously his holiday destination took the coronavirus lockdown.

In May residents placed a large notice along the famous Bealach na Bà road, part of the North Coast 500 route.

There was also a BBC 2 reality TV show filmed there called Monty Halls’ Great Escape which was was broadcast back in 2009.

It saw Marine biologist Monty Halls ‘escape from the city’ to be a crofter, to raise animals and grow vegetables on his own farm.

Mr Johnson’s three-bedroom cottage is fully booked up for most of this year and the start of the next, according to its website. 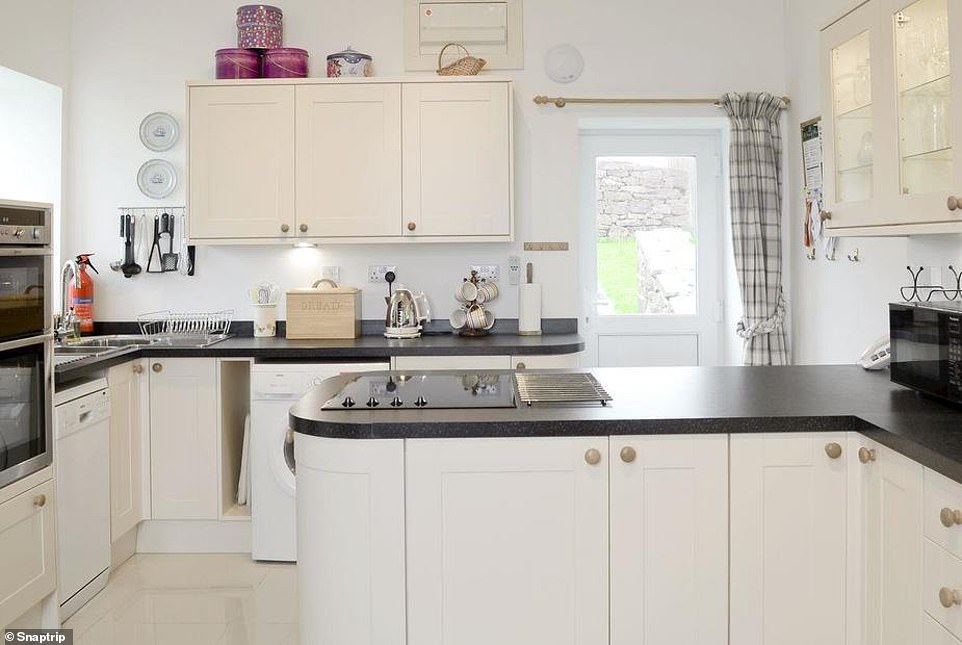 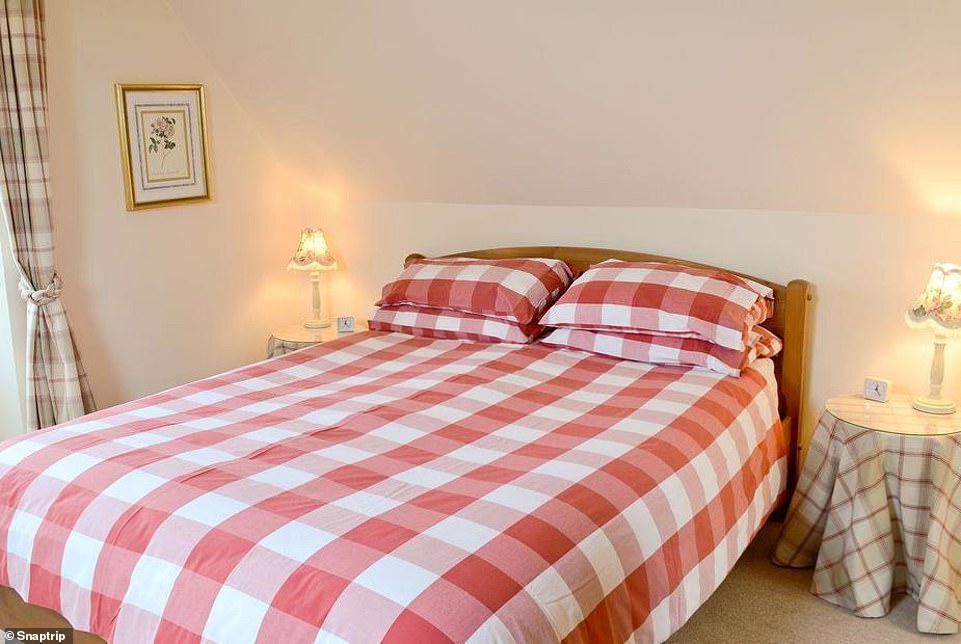 The house has three bedrooms, but the master has a smart double bed with gingham style duvet for guests to relax 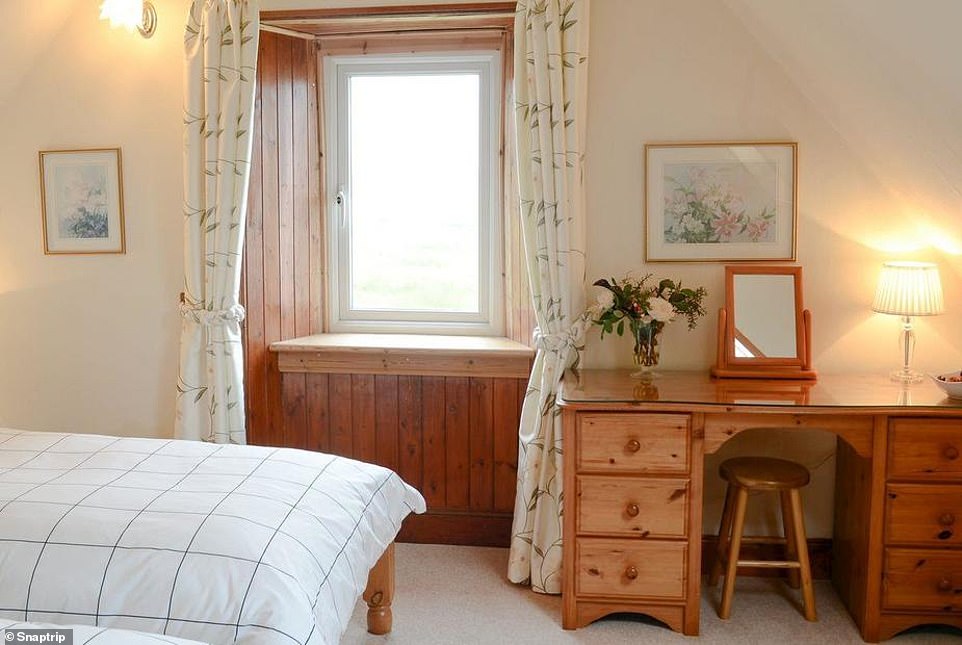 Another of the bedrooms has two single beds, but with a window offering terrific views of the Scottish Highlands 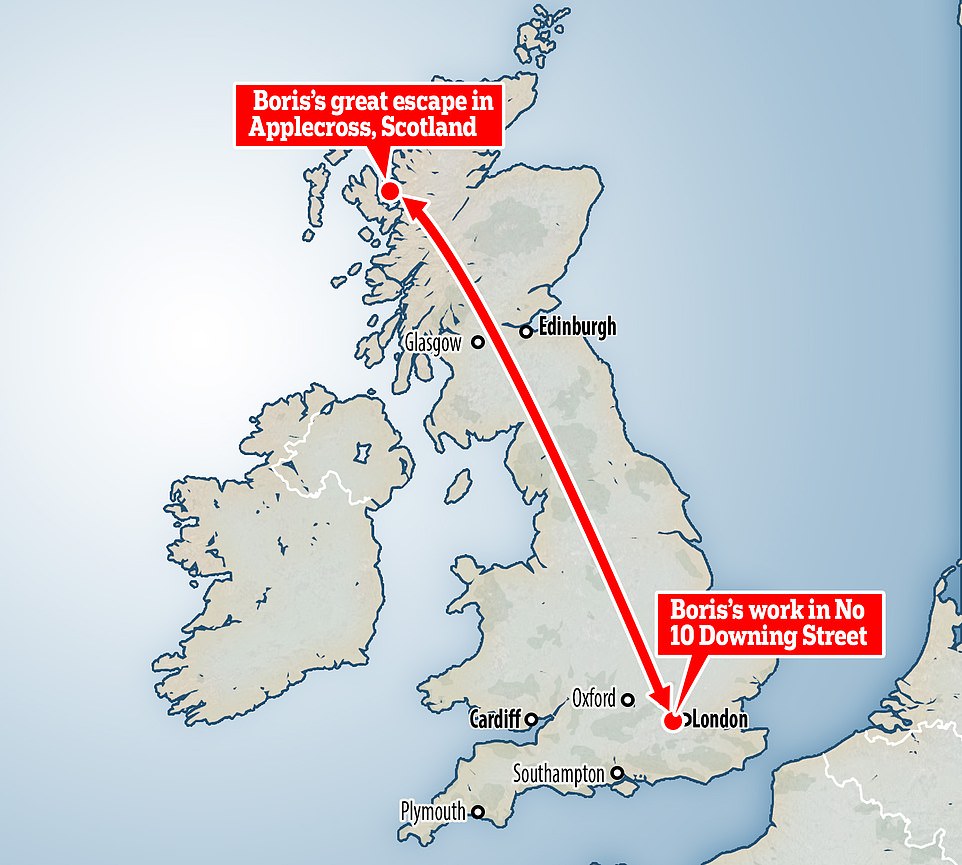 It describes itself as a ‘wonderful location to explore’ and boasts of how it is both ‘secluded and spacious’.

Ironically given the education crisis that engulfed his government while he was away, the cottage still retains signs of its former life as a schoolhouse.

The cosy-looking property makes much of it ‘part-panelled living room’  and has its own woodburner.

It has its own water supply from a spring and requires a £200 deposit to book, but has an honesty box if people want to use the telephone.

A listing for the rental exclaims: ‘Relax and unwind in this former school house. Secluded, yet within a wonderful location to explore. Excellent walking and climbing nearby.

‘This secluded and spacious cottage, with its own walled garden, enjoys a gloriously sunny position on the seashore with spectacular views towards the islands of Raasay, Rona and Skye. 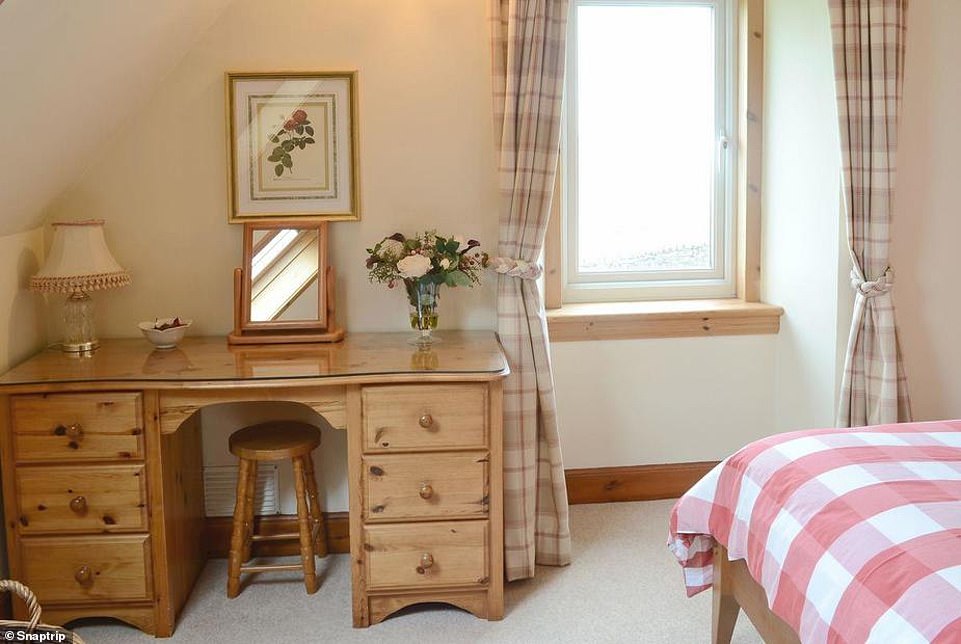 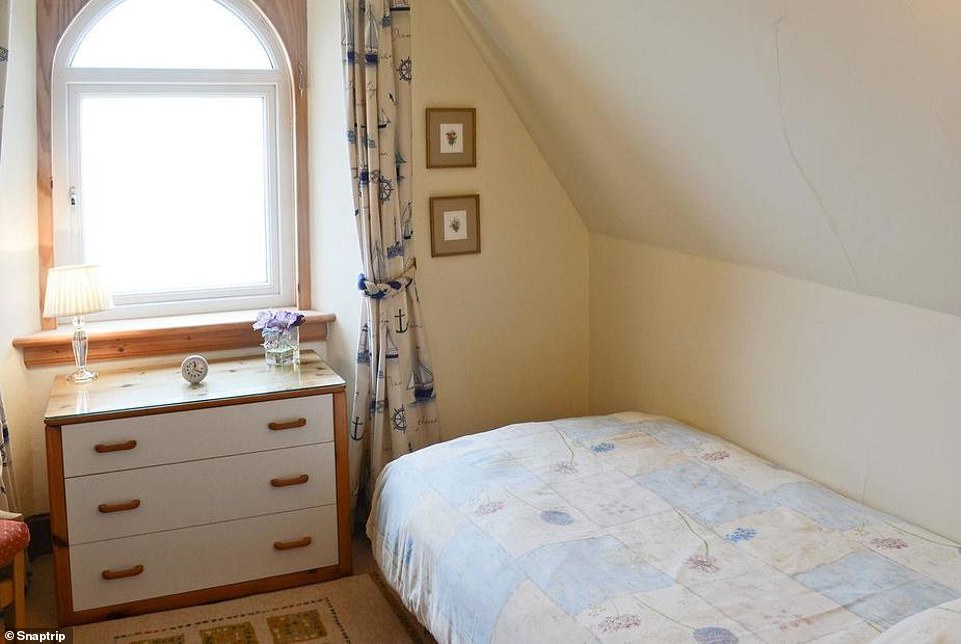 The third bedroom only has one bed so would be perfect for a child to be based, with plenty of space for their belongings 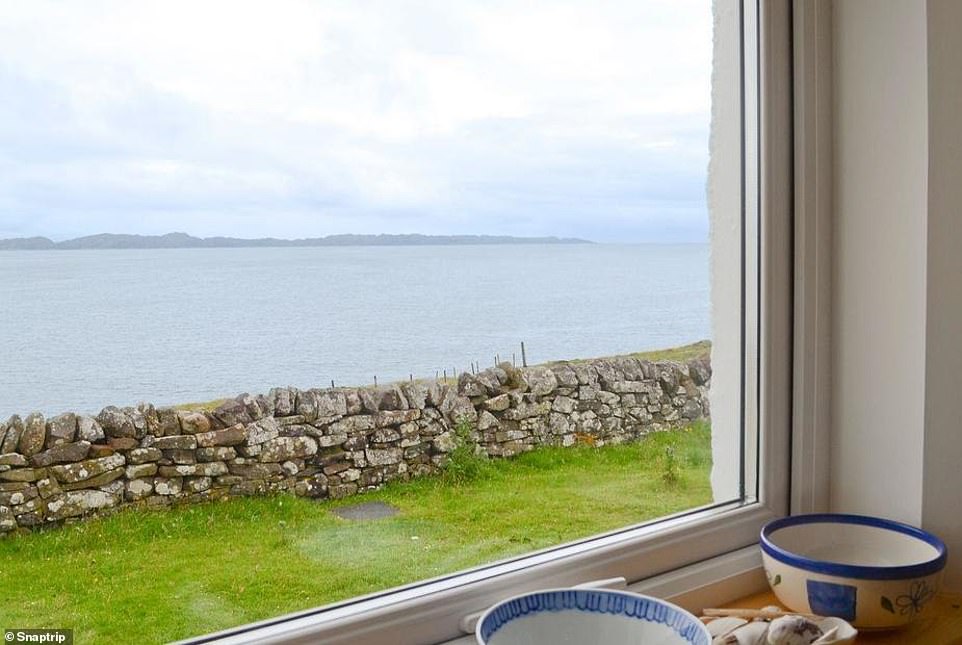 Just yards away is the sea, which publicity for the property says offers a’ gloriously sunny position on the seashore’ 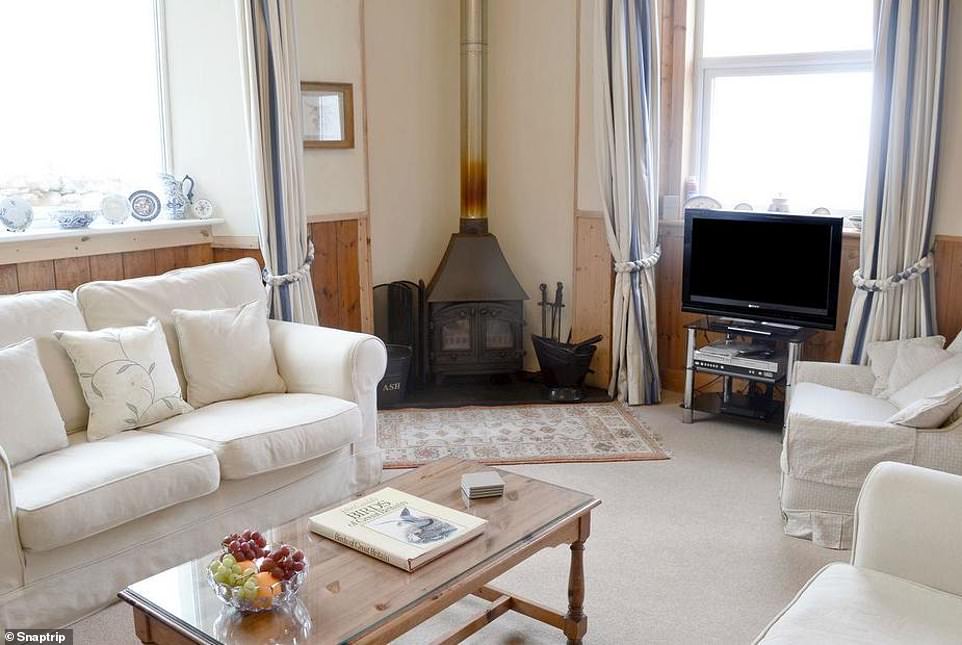 A wood burner in the living room solves any issues with the cold in the house, which also has full central heating throughout 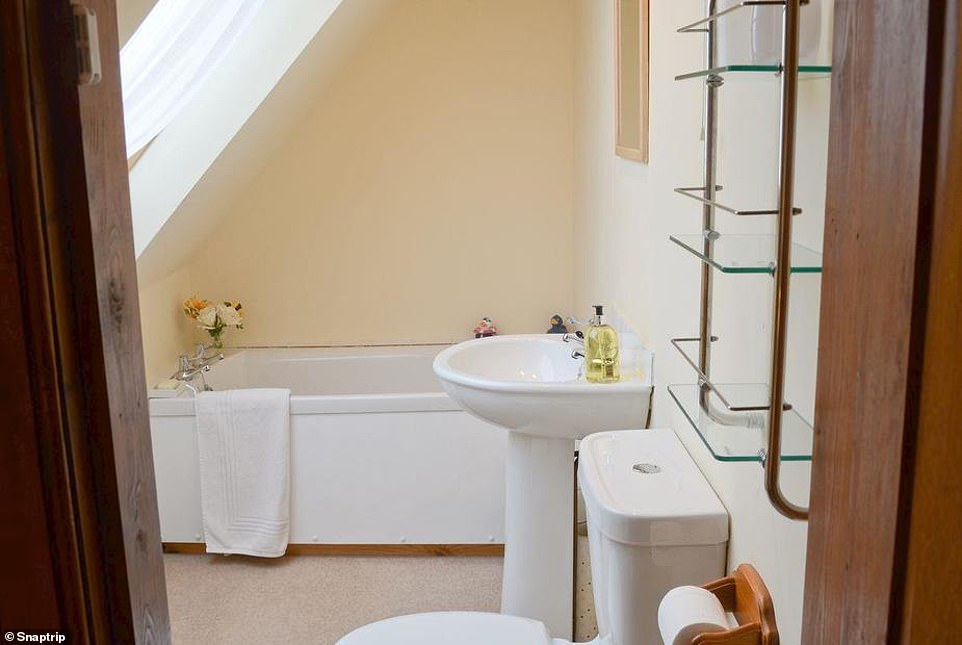 The house has three bedrooms, but only has one bathroon, which comes with a shower over the corner bath, and toilet 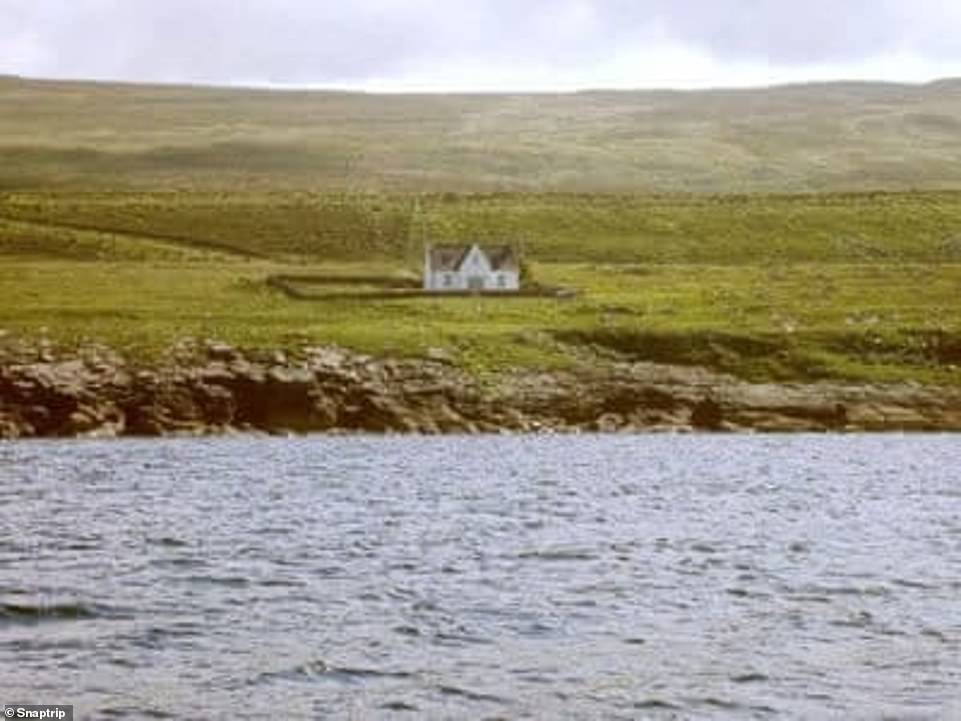 ‘Reached via a quarter-mile track, this former school house has been tastefully converted, whilst retaining interesting original features; formerly classrooms, the part-panelled living room and well-equipped modern kitchen feature lovely high ceilings, and there is a large picture window in the hall, ideal for viewing wonderful sunsets and abundant wildlife.’

Unlike previous prime ministers, including David Cameron and Theresa May, who have allowed the Press to take pictures during their summer breaks, Mr Johnson decided not to.

No 10 insists Mr Johnson has been kept briefed on the exams situation while at the Scottish property.

But yesterday, when the Daily Mail offered the Prime Minister the opportunity to issue a public statement on the A-levels furore, Downing Street declined. 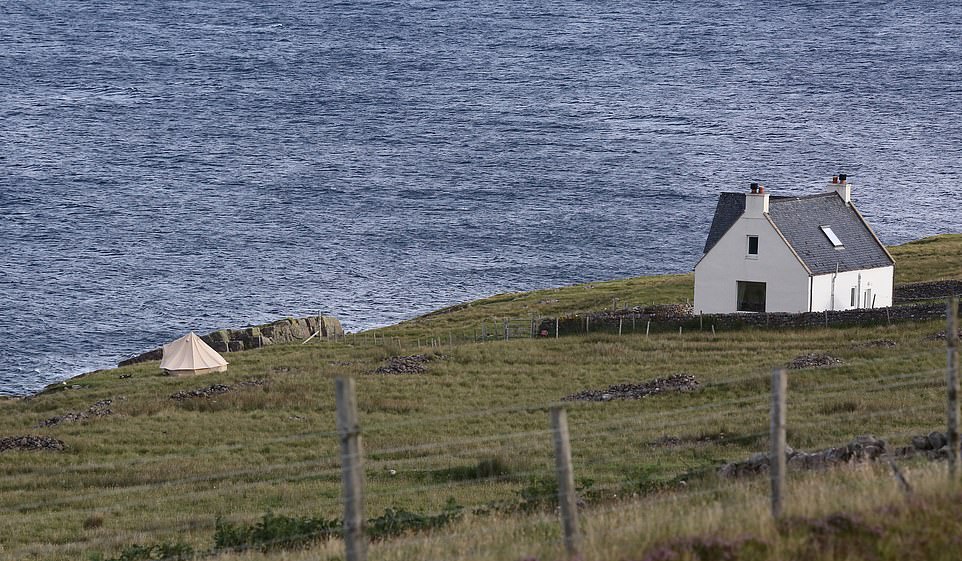 The Old School House is believed to be connected to the neighbouring land, where the canvas tent was set up this week 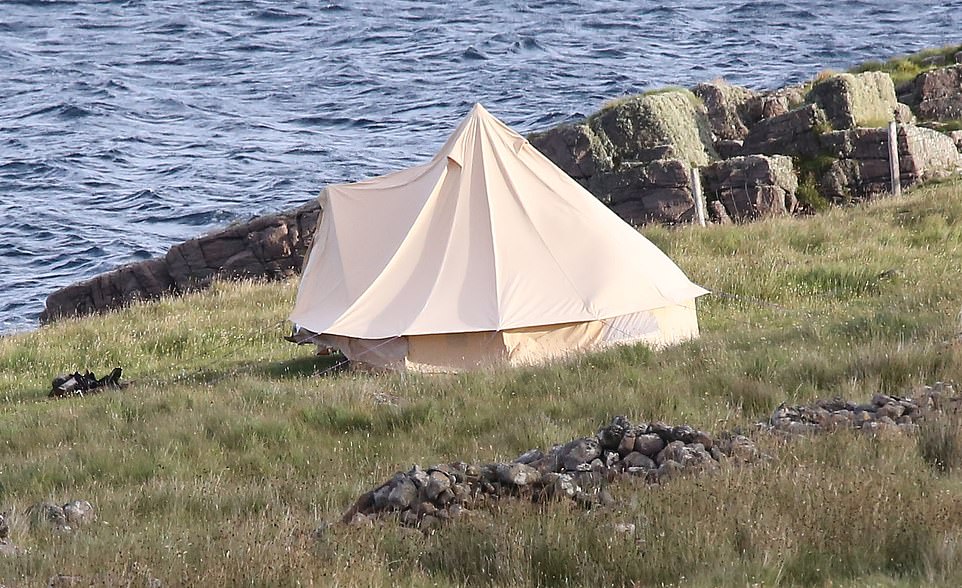 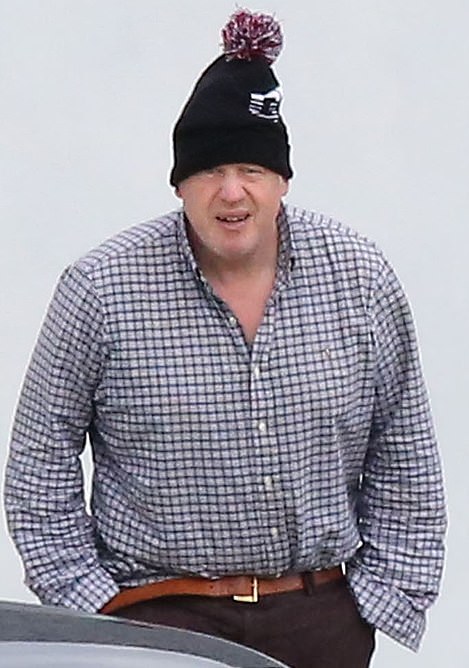 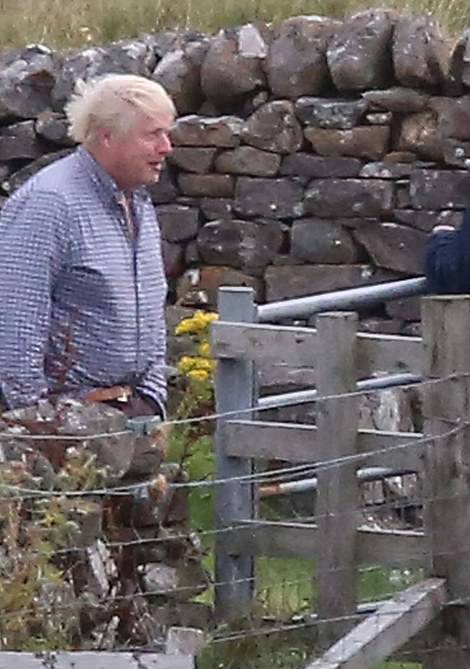 Yesterday, Mr Johnson was seen coming and going to talk with his six-strong security team, whose three vehicles have been parked outside throughout his stay.

At one stage, Mr Johnson pulled on a woollen hat in the bracing coastal winds.

The Prime Minister’s presence in the remote corner of Scotland has caused a flutter of excitement among those who have managed to catch a glimpse of him.

One holidaymaker told the Mail how he was taken aback when the Tory leader stumbled past him on a hiking trail on Wednesday.

He described how Mr Johnson, whose face was covered with a specialist hat designed to keep away the area’s notorious midge population, was joined on the walk by a small entourage.

As well as two close-protection guards who are routinely at the Prime Minister’s side, he was joined by Miss Symonds, a local guide and an unknown woman who was walking Dilyn.

The tourist said: ‘It just looked like any other normal family day out.’

Layla Moran, the Liberal Democrats’ education spokesman, said the Prime Minister’s silence on the issue had been ‘deafening’.

She added: ‘The very least the Prime Minister should have said was sorry. Holiday or not, he must apologise for the impact of this fiasco on young people, and for choosing ‘yes men’ over competent ministers.’

Labour deputy leader Angela Rayner said: ‘Instead of heeding warnings and addressing this looming crisis before it was too late, the Prime Minister has been invisible.

‘Parents, young people and teachers deserve a public apology from the Prime Minister and a plan for how he will get a grip of his Government.’

On Monday, the Government performed a U-turn on A-level results just days after they were published, allowing students to receive their teacher-assessed grades, instead of those moderated by a controversial algorithm.

The row has led to pressure on Education Secretary Gavin Williamson and triggered charges of government incompetence.

Sir Bernard Jenkin, the Tory chairman of the liaison select committee, yesterday broke ranks to express concern that Mr Johnson’s Government had been repeatedly refusing to take the blame for its mistakes.

He told Radio 4’s The World At One that there was a ‘sort of pattern setting in’ under Mr Johnson’s watch, whereby ‘something goes wrong and it is the permanent secretary’s fault or it is some public body’s fault’.

Earlier this year, Mr Johnson was called a ‘part-time prime minister’ by former Labour leader Jeremy Corbyn for refusing to cut short a break to respond to flooding in the UK.

The Prime Minister last month said he would be working ‘flat out’ through the summer but revealed plans to escape for a mini-break at some point.

He said: ‘I would encourage people still to think of wonderful staycations here in the UK. There are all sorts of fantastic destinations, the best in the world.

All my happiest holiday memories are of holiday vacations here in the UK, bucket-and-spade jobs or whatever, and I thoroughly recommend it.’