Billionaire diamond dealer to stars including Rosie Huntington-Whiteley and Naomi Watts ‘may never stand trial’ for swindling £1.5billion from Indian bank ‘because he is depressed’

A billionaire diamond dealer to the stars accused of swindling £1.5billion from a national bank may ‘never stand trial’ because he is depressed, a court heard today.

Nirav Modi, 49, one of India’s richest man, fled to the UK after allegedly taking part in the country’s biggest-ever fraud on the state-run Punjab National Bank.

Modi was arrested on March 19 last year in Holborn, central London after a Metro bank employee identified him as a fugitive when he tried to open an account.

The wanted tycoon, whose jewellery is worn by the likes of model Rosie Huntington-Whiteley and actress Naomi Watts, had to swap his £17,000-a-month London flat for a cell in Wandsworth prison.

Wearing a grey and blue striped jumper, Modi – worth $1.73 billion according to Forbes – followed his latest hearing at Westminster Magistrates’ Court from a prison video-link room. 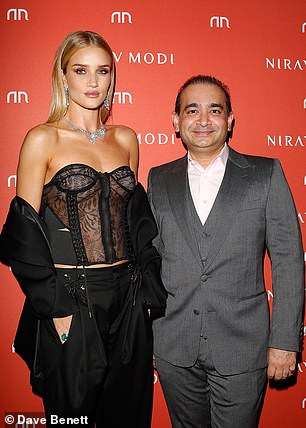 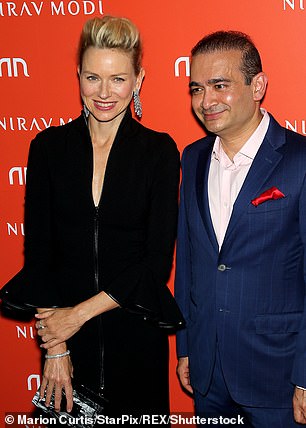 Nirav Modi (pictured with Rosie Huntington-Whiteley), 49, one of India’s richest man, fled to the UK after allegedly taking part in the country’s biggest-ever fraud on the state-run Punjab National Bank

Clare Montgomery, QC, defending, said Modi has suffered a ‘significant decline’ and should be bailed to stay at the north London Priory hospital ahead of the extradition judgement.

Ms Montgomery said: ‘The reality is he is presently in the grip of a powerfully disabling illness which has led to a significant deterioration in his capacity.

‘Unless he receives treatment there is likely to be a deterioration that will continue to the level where he will not be fit to stand trial.

‘If it becomes chronic any recovery is likely to be slow and fragile. 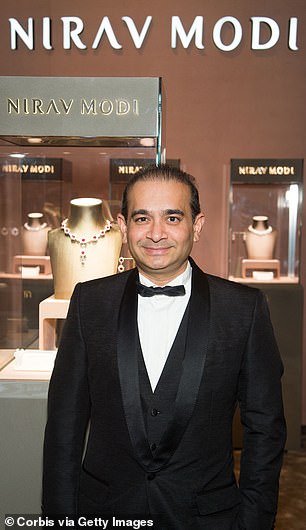 Modi was arrested on March 19 last year in Holborn, central London after a Metro bank employee identified him as a fugitive when he tried to open an account

‘Watching Mr Modi decline in a state that now threatens the very extradition the government of India seek.

‘He is at the point of becoming so incapacitated he will not ever stand trial.

‘There is a family history of depression.

‘His brain just drops down. It is very very hard to fake, it is an instinctive reaction.

‘An apparently charismatic and successful businessman travelling the world and having a capacity to escape, to this man. The contrast could not be more stark.

‘There is no viable destination to a man in Mr Modi’s position. It is improbable he could spirit himself from north London to anywhere or any place he could be undetected.

‘This is the last resort. This is not our first choice of how to secure treatment. Nor is it intended to be an easy choice for him, it makes his extradition more, not less, likely.’

Helen Malcolm, QC, for the Indian government, said: ‘We’ve had no evidence served form Wandsworth about his mental state.

‘It’s said it is real and serious. Well, there’s no evidence for that.

‘There is oodles of money. He has enough money sitting somewhere in the world to buy a small country, certainly a small island, so it is nonsense to say there is no viable destination for him.

‘He can wander out into the garden and from there into the street.’

‘This is a further application made before me due to a deterioration of Mr Modi’s mental health and offer of a place at the Priory north London hospital.

‘I’m yet to make my findings or give my judgement.

‘Mr Modi is accused of conspiracy to defraud for a complex and sophisticated structure. Accused of interfering with witnesses and destruction of evidence the alleged fraud is over $1 billion. 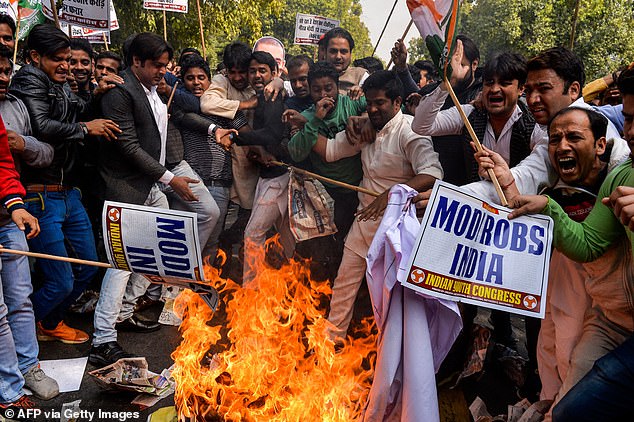 Meanwhile, back in India, his effigy has been burned in the street (pictured) and the authorities have seized his assets

‘He was in London in February 2018, however, the government of India’s case is he was fleeing India as the fraud was unravelling. There have been unsuccessful attempts for citizenship in other countries by Mr Modi.

‘Mr Modi has accessed substantial sums of money there is $356 million unaccounted for in terms of proceeds of the fraud.

‘I have substantial grounds to believe he would interfere with witnesses and fail to surrender.

‘[The Priory] is not secure and even with GPS tagging there would present an ability for him to readily abscond, disappear and evade the proceedings.

‘Should his mental health require hospitalisation the prison is under duty to transfer him to hospital.’

If Modi is extradited he will face trial in India for conspiracy to defraud and interfering with witnesses.

Modi, of HMP Wandsworth, was remanded in custody until November 3.