War veteran Ben Roberts-Smith’s friend and comrade warned him that a Defence Force inquiry into allegations of war crimes by Australian soldiers was a “witch-hunt” and that he should prepare himself, the Federal Court has heard.

Person 5, a former Special Air Service soldier, served alongside Roberts-Smith in Afghanistan and is the first SAS witness to give evidence for the decorated former soldier in his marathon defamation case against The Age, The Sydney Morning Herald and The Canberra Times. 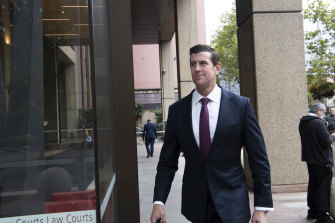 Roberts-Smith alleges a series of articles by the newspapers in 2018 wrongly accuse him of war crimes. The Age and the Herald, owned by Nine, and The Canberra Times, now under separate ownership, are seeking to rely on a defence of truth.

Person 5 said he attended an interview in May 2018 with the head of the Defence Force inquiry and warned Roberts-Smith afterwards “to prepare himself; it was a witch-hunt”. He said he also told Roberts-Smith it appeared they had “dragged” in another soldier, dubbed Person 18, who has given evidence against Roberts-Smith in the defamation case.

Person 5 objected to answering a question on Thursday by Roberts-Smith’s barrister, Arthur Moses, SC, about his actions following that interview, citing potential self-incrimination. Person 5’s barrister, Rob Ranken, told the court that the evidence may tend to prove he committed an offence relating to restrictions on the disclosure of evidence he gave before the inquiry.

Person 5, whose identity cannot be revealed for national security reasons, said he was willing to answer the question with the benefit of a certificate granted by Justice Anthony Besanko that prevents the evidence being used against him in any proceeding in an Australian court.

Justice Besanko granted the certificate and Person 5 told the court he emailed a statement in June 2018 to Roberts-Smith “to pass off to his lawyers”. The court heard the document was headed “Statement about treatment under interrogation by the IGADF [Inspector-General of the Defence Force].”

Asked why he did that, Person 5 said: “I was without legal representation in Australia. I’d moved to a different country. I wanted to complain about the treatment and that was the avenue I took.”

Person 5 said that “majority of it was in the media anyway”. He referred to an article published by the newspapers in June 2018, raising allegations that unnamed special forces soldiers pressured a “rookie” soldier to execute an unarmed Afghan detainee in 2009.

Person 5 said he subsequently obtained his own legal representation. He said he found out “on Tuesday morning” that the Seven Network, Roberts-Smith’s employer, was paying for his lawyers.

Roberts-Smith, general manager of Seven Queensland, has taken leave from his role during the defamation trial. His boss, Seven West Media chairman Kerry Stokes, is bankrolling his lawsuit.

The newspapers have alleged as part of their defence that Roberts-Smith directed a subordinate, Person 4, to kill an unarmed Afghan man in April 2009, and that Person 5 officially gave that order. Both Roberts-Smith and Person 5 deny the alleged events took place.