Shushi, Nagorno-Karabakh: In a war with no shortage of random shelling, it was one shot that was unmistakably on target. The Azerbaijani missile plunged straight into the roof of a cultural centre in the Nagorno-Karabakh town of Shushi, just as Armenian security forces were sheltering inside.

"We have lost at least six or seven men, with many more injured," one officer said, fighting back tears as he pulled dead comrades from the building's wreckage this week.

The missile salvo was just one of hundreds that Azerbaijan has exchanged with Armenia during the latest fight over the disputed territory of Nagorno-Karabakh, which broke away from Azerbaijan after a brutal war that last from 1988 to 1994. 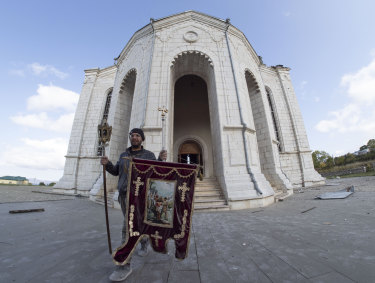 A man carries out a banner from the Holy Saviour Cathedral damaged by shelling during a military conflict, in Shushi, in the self-proclaimed Republic of Nagorno-Karabakh.Credit:AP

With both sides nursing memories of those six years of ethnic bloodletting, there is no shortage of scores to settle. But the town of Shushi, which sits on a hilltop overlooking the Nagorno Karabakh capital, Stepanakert, is where the grudges are bitterest.

In Soviet times, when Nagorno-Karabakh was under Azerbaijani rule, Shushi was a mix of Armenians and Azeris, whose differences were suppressed under communism. All that changed when the Soviet empire collapsed, making Shushi centre stage for a battle laden with ethnic and religious symbolism.

First it was held by the Azerbaijanis, who used the town's Holy Saviour cathedral as a launch point for raining artillery down on Armenian-held Stepanakert, sometimes firing up to 1,000 shells per week. Then, in a battle that Armenians still hail as their greatest victory in Nagorno-Karabakh, Armenian forces laid siege to Shushi, fighting their way up its steep slopes to retake it in 1992.

"When we took Shushi back, we found the cathedral half destroyed, with missiles scattered around inside and animals grazing in there," said Erik Mangasaryan, 73, who took part in the assault. "Azerbaijan will never retake it, I tell you, because we will make it a bloodbath for them."

"Operation Wedding in the Mountains", as the Armenians called it, was a turning point in the war, as it reclaimed the road that links Nagorno-Karabakh to Armenia. A half-destroyed Armenian T-72 tank still overlooks the road as a monument to the battle.

Today, the only reminders of the Azeri presence in Shushi are two mosques, both of which have been restored. Their only visitors, though, are occasional Iranian pilgrims, Shushi's Azeri population having fled entirely.

Yet even now, Azeris still see Shushi – known to them as Shusha – as their traditional stronghold, remembering it as centre for Azeri music and poetry. Hence their anger last month when Arayik Harutyunyan, a war veteran who has just become Nagorno-Karabakh's new president, announced that the enclave's national assembly would be moving from Stepanakert to Shushi.

In any other part of the world, this might be seen as a routine exercise in local government reorganisation. Here, however, it was viewed – and possibly intended – as an outright provocation to Azerbaijan. At the outset of hostilities last week, Azerbaijan's president, Ilham Aliev, lashed out at Harutyunyan for choosing Shushi as the venue for his swearing-in ceremony in May.

"They held the so-called swearing-in ceremony for the so-called leader of the criminal Nagorno-Karabakh regime in Shusha, an ancient pearl of Azerbaijani culture," Aliev fumed. "These are deliberate attempts to drag us into conflict and provoke retaliatory actions." 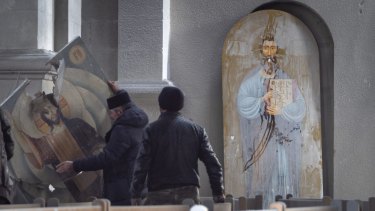 Men lift an icon in the Holy Saviour Cathedral damaged by shelling during a military conflict, in Shushi, in the self-proclaimed Republic of Nagorno-Karabakh.Credit:AP

On Thursday, the dome of the Holy Saviour Cathedral was hit by shellfire, outraging the town's Armenian residents.

Just as Syrian jihadists are now believed to be fighting for Aliev, so too did foreign jihadists fight on the Azeri side during the original siege. The defence against the Armenian assault was led by the notorious Chechen guerrilla Shamil Basayev, who later joined al-Qaeda and ordered the Beslan school siege in Russia in 2004.

Then, as now, Turkey was also involved, launching behind the scenes operations to help the Azeris, who are seen as fellow Turks. A more direct role was only stopped by Russia, who feared – as some do now – that it could start a third world war.

"Shushi is a very special place for us because it is the symbol of Nagorno-Karabakh's war to liberate ourselves and connect our country with Armenia," said Ashot Gulyan, 55, drinking tea with two cousins outside one of Shushi's tatty Soviet-era housing blocks.

"In the Soviet era, yes, everyone was supposed to be friends, and I knew many Azeris," he added. "But after all that has happened. I don't think it would be easy for us to welcome in Azeris again – even if they came in peace."