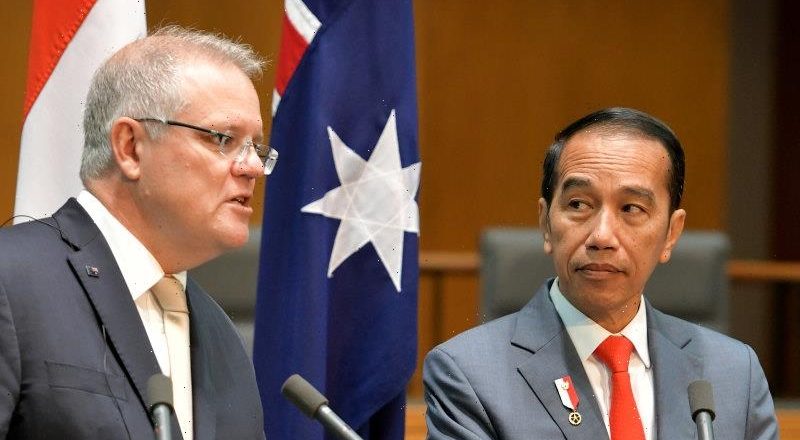 Singapore: Australia risks Indonesia sliding further into the orbit of China amid an absence of face-to-face diplomacy with its nearest and biggest neighbours in south-east Asia during the pandemic.

Tom Lembong, a former Indonesian trade minister and investment chief, warns that Australia, the United States and like-minded countries will have to mount a co-ordinated and sustained effort if they want to stop Jakarta “going all in” with the superpower.

While Prime Minister Scott Morrison lands in Singapore on Thursday for a flying visit en route to the G7 summit in the UK, there hasn’t been a senior level visit with Indonesia since President Joko Widodo, known as Jokowi, flew to Canberra and addressed Parliament in February last year.

The virus, however, hasn’t stopped a slew of cabinet level and above figures from other countries passing through the archipelago in that time.

They include Chinese Foreign Minister Wang Yi, who has made three visits; Japanese Prime Minister Yoshihide Suga; Malaysia’s Muhyiddin Yassin; British Foreign Secretary Dominic Raab; then US secretary of state Mike Pompeo, and ministers or deputy ministers from France, Singapore, Turkey, South Korea, Iran, UAE and Hungary. The latest to fly in during the past fortnight were US Deputy Secretary of State Wendy Sherman and the European Union’s foreign policy chief Josep Borrell.

Lembong, who was a key figure in the formation of a trade deal with Australia in 2019, believes the global health crisis has played into China’s hands with Indonesia heavily reliant on it for vaccines as well as investment. He said it was up to Australia and its partners in the Quadrilateral Security Dialogue (Quad) – US, Japan and India – to try and counter Beijing’s growing influence.

“Indonesia will continue to gravitate towards China under the Jokowi administration and possibly beyond,” Lembong told The Sydney Morning Herald and The Age.

“If geopolitical rivals like the Quad really want to keep Indonesia from going ‘all-in’ on China, they would have to mount a highly imaginative and concerted effort over several years.”

Chinese state media reported this week that China had agreed to help Indonesia build a regional vaccine production facility, with Jakarta furthering its involvement in the superpower’s Belt and Road Initiative and deepening maritime cooperation. It follows the Indonesian navy’s decision last month to take up an offer from China to lead the recovery mission for a lost submarine near Bali.

With Australia’s borders shut and Indonesia having been the hardest hit by COVID-19 in the region, – it has recorded 1.86 million total cases and more than 51,000 deaths – Morrison and his ministers have resorted to Zoom diplomacy when it comes to Jakarta.

Jodi Mahardi, a spokesman for Luhut Binsar Pandjaitan, Joko’s special envoy and coordinator for cooperation with China, said visits between Australian and Indonesian officials were “hampered by restrictions in both countries”.

“In general, countries do make diplomatic travels or there is an exemption [of travel policy] for ministerial level,” he said. “Perhaps Australia has a different policy including for their officials to travel outside Australia.”

Australia’s Department of Foreign Affairs and Trade and a spokesman for the minister, Senator Marise Payne, were contacted for comment.

Lembong does not believe Australia’s relationship with Indonesia has been affected by the shift to virtual talks, arguing it is “probably the best it’s ever been”. Morrison’s first overseas visit as prime minister was to Jakarta in 2018 and he returned there in 2019, the same year the Indonesia-Australia Comprehensive Economic Partnership Agreement was signed. Australia also last November offered Indonesia a $1.5 billion loan after it fell into recession.

However, some Indonesia experts argue Australia is in danger of losing ground.

“Despite the pandemic Jakarta has seen a steady flow of high-level diplomatic visits, which underlines the importance that many nations place on relations with Indonesia,” said Ben Bland, the director of the south-east Asia program at the Lowy Institute.

“If they are to capitalise on the improving bilateral relations of recent years, and live up to the talk of Indonesia being Australia’s ‘closest friend’, Australian ministers need to show up in Jakarta too.”

Ross Taylor, president of the Perth-based Indonesia Institute, said the situation had been exacerbated by the government’s withdrawal last year of Australia’s then ambassador to Indonesia, Gary Quinlan, for health reasons.

“What worries me is that Indonesia doesn’t seem to mind too much,” he said.

Professor Tim Lindsey University of Melbourne University argues the government shouldn’t be criticised for being cautious as the virus outbreak in Indonesia is even worse than its cases numbers suggest.

He said the real problem with the two countries’ relationship was not at leaders’ level but lack of understanding about the neighbouring giant among the population. “Indonesia is a blind spot in our national consciousness.”

With an eye towards an “open and free Indo-Pacific”, Quad leaders in March announced plans to provide 1 billion vaccine doses to south-east Asia by the end of 2022 and step up coordinated efforts on climate change and emerging technologies.