Home » World News » Are we witnessing the next great WNBA dynasty?

Are we witnessing the next great WNBA dynasty?

It was a crashing of one record after another, capped by a 33-point demolition. That itself was the largest margin of victory in a WNBA Finals game.

The Seattle Storm entered elite company on Tuesday night with their fourth championship in franchise history, pulling them into a tie with the Minnesota Lynx and the Houston Comets. It was long expected given their star talent and deep bench, but nothing is guaranteed.

It’s now safe to expect a dynasty in the early making. Just like the Lynx and the Comets before them.

The 2020 title was a repeat, if you will, to the 2018 title run since Bird and Breanna Stewart missed 2019 because of injury. In both Finals series, the Storm swept the competition and Stewart, the only college player to win a national title every year, was named MVP. They’ve done it with the same cast and that core is expected to stick around.

“We are going to freaking celebrate this because this was hard. This was by far harder than the first championship that we won,” defensive stalwart Alysha Clark said. “And we are just going to be in this moment. But hopefully you’ll see us all back again next year.”

It’s easy to start with Bird, the most veteran player in the league who set the Finals assists record in Game 1. She’s the glue of every Storm championship and the team has lost only one Finals game in her career. Though she’s closer to the end of her career than the beginning, she’s kept mentally preparing to be sharper. Her no-look, full-court passes became constant this series and it helped the Storm push the pace in transition. If her eyes stay sharp, she’ll trick defenses without a problem.

Bird has been on year-to-year contracts and said after the game the decision to come back is made in the offseason when she begins to prepare for basketball again. She intends to compete for a spot on the Olympic roster; it seems likely she’ll play in the W at least one more year. 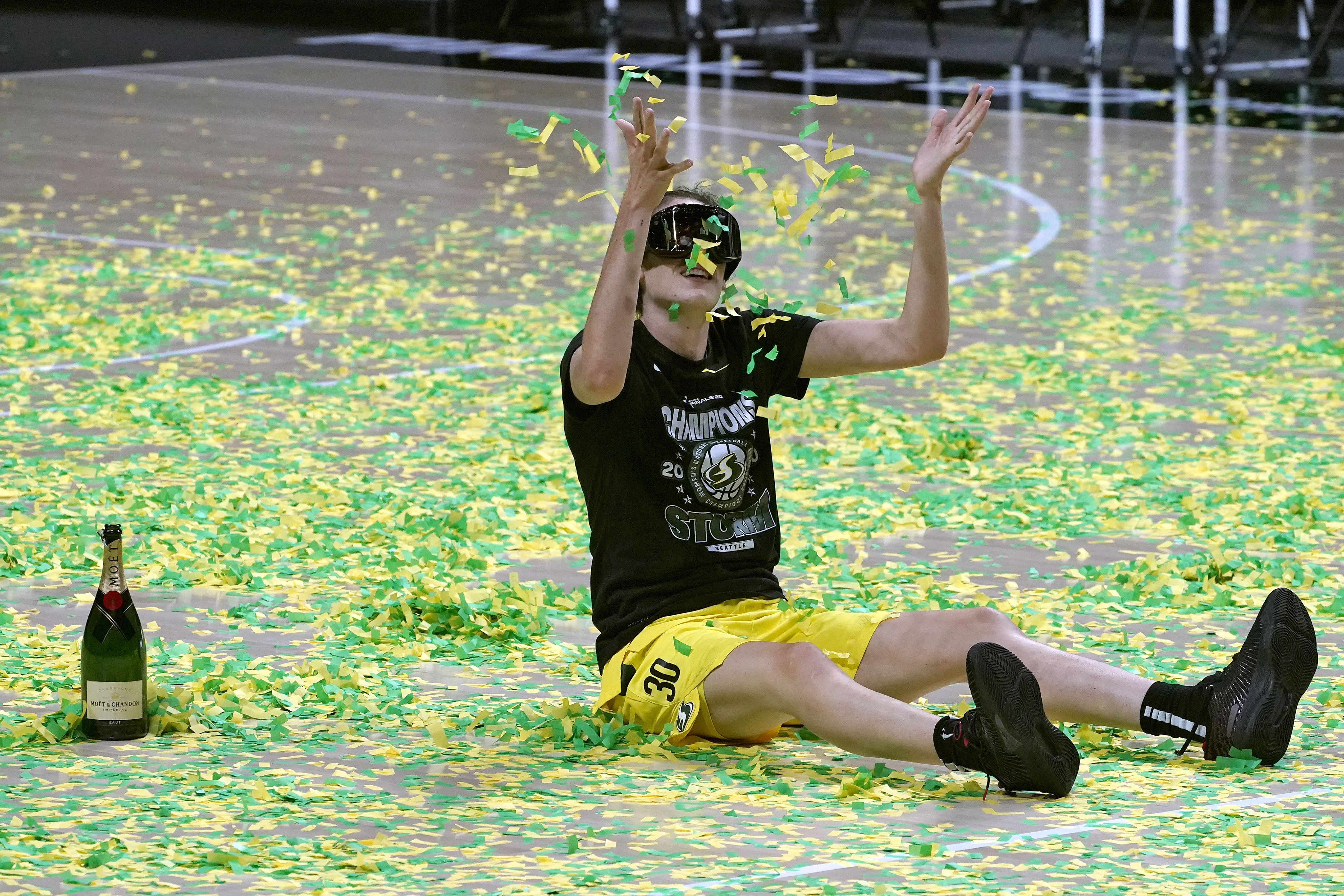 At 26 years old — and she only turned 26 in August — Stewart is the face of the Storm moving forward. She is often heralded as a generational talent and her accolades keep piling up. While guzzling champagne in goggles during her post-game Zoom call, she spoke of how proud she is of what she’s done.

Not unanimous MVP, not being in MVP contention. But doing it at all after rupturing her Achilles in April 2019, pushing it in rehab and returning even better than she was before.

Stewart was the second of back-to-back No. 1 picks for the Storm. The year prior to her draft, the franchise took Notre Dame star Jewell Loyd, who turned 27 the day of the championship. Though often overlooked, she’s rarely disappointed. It was Loyd who scored 28 points in Game 1, creating a lethal combination next to Stewart’s 37 points and 15 rebounds. Her 25 and 20-point outings against the Lynx in the semifinals helped buoy the team as Stewart and Bird knocked off rust from being out nearly two weeks.

That duo alone should make opponents wary, especially seeing them in 2020 versus 2018. It’s the opposite of those memes. The coach on the floor can’t help but agree.

“When your physical ability starts to peak at the same time as your experience and your mentality surrounding the game, that’s when the special games and the special moments and the special seasons really start to show themselves,” Bird said on a video call with media. “With Stewie and Jewell, their talent is really insane. When you think about it the things they can do on the basketball court, they’re the next generation. They’re the now generation, but they’re also the next generation for the next five, 10, 15, who knows how many years.

“Now what you’re seeing is that talent, like I said, start to peak with their experience and their mentality on how they approach things. They don’t make the same mistakes they made two years ago. They’re way more prepared from a mental standpoint and a physical standpoint than they were two years ago. It’s kind of scary when you think about it because they’re still so young.”

It wasn’t only record-setting offense that lifted the Storm. Their defense was led by unanimous All-Defensive selection Clark. The 33-year-old’s contract extension will expire with the new season, but the Storm have cap space to keep her. The same goes for 29-year-old Natasha Howard. It was Clark and Howard who took over Game 2 in one of the most well balanced all-around games of the Seattle season. Not to mention Jordin Canada, who is more than skilled at stepping in for Bird and had 15 off the bench in Game 3.

The Storm have two titles in three years, and though Bird cautioned against the “dynasty” label yet it’s fair to say they’re halfway there. The Comets won the first four WNBA titles with a stunning cast, including Cynthia Cooper as the only player to win four Finals MVPs. The Lynx won four in seven years with their core. It’s fair to believe this Storm team has it in them to match that. 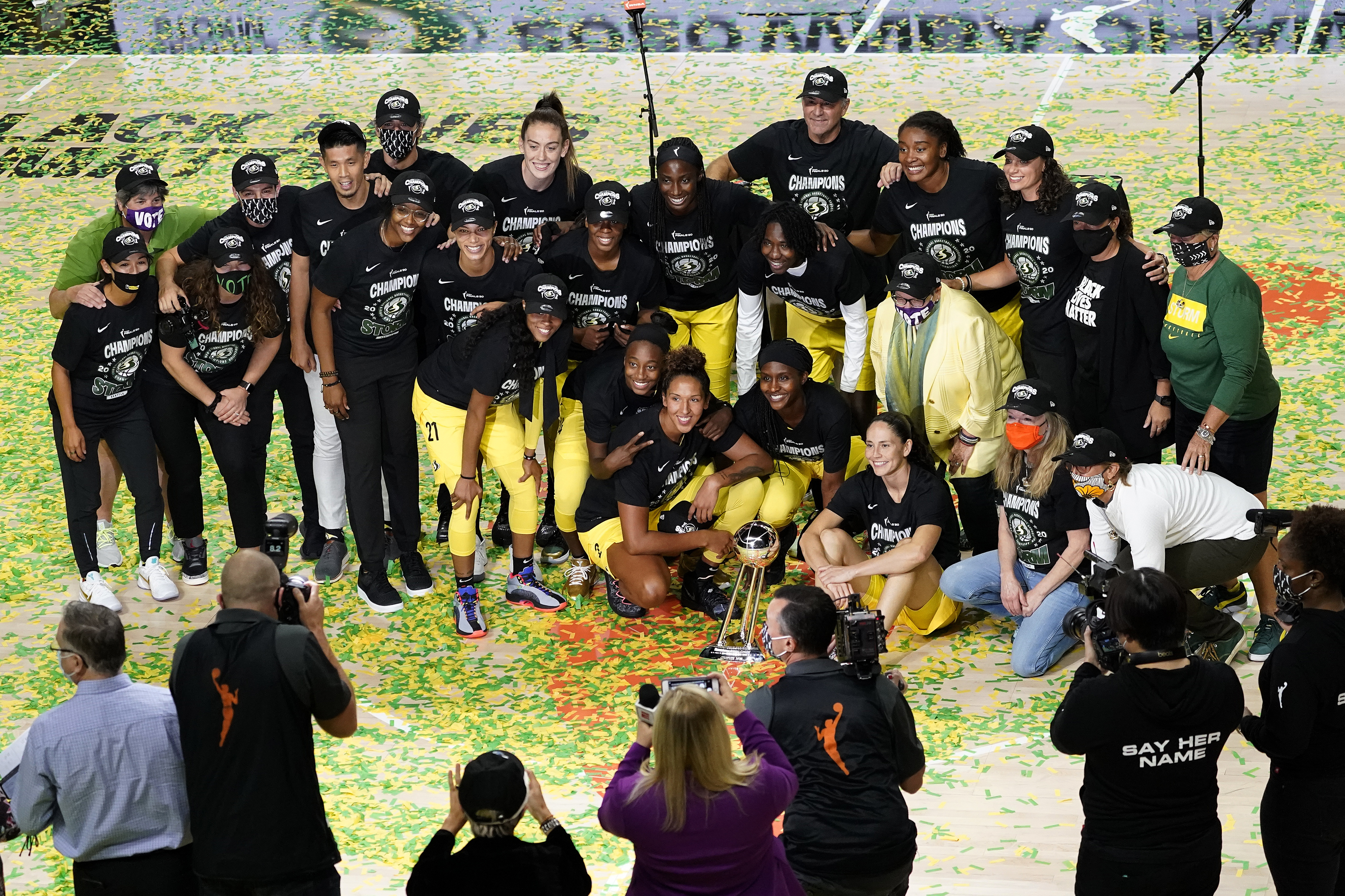